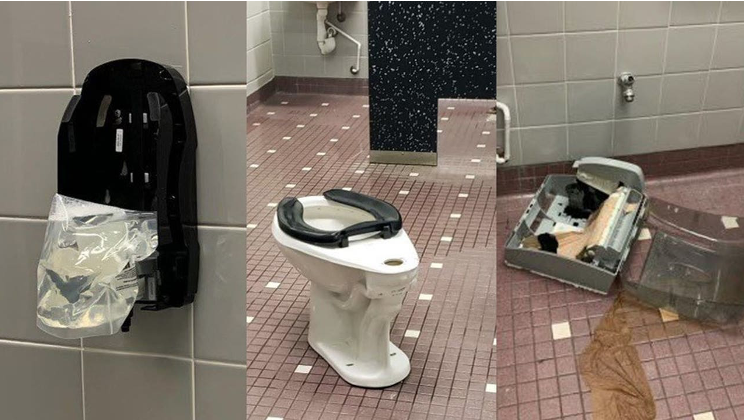 THE DOCTOR IS IN - As much as we all pretty much understand how the COVID-19 pandemic has destroyed much of our civilized, law-abiding history and present-day ills, it's hard not to conclude that L.A.'s so-called "leadership" has presided, if not exploited, the lawlessness that took over during the psychological crisis that's taken most of us to the psychological, if not psychiatric cleaners.

Complicating everything is the complete emasculation of our authorities, who used to, and should still always, enforce the rules and laws of civilized society. Let's start with the children, whose ill behavior has been promoted and allowed by those who've let their psychological and developmental needs go straight to Hades:

1) "Devious Licks" and other fun stuff we see in our now-insane schools:

So why on earth are our schools urinals, soap dispensers, and toilet stalls, and even school toilets been destroyed and/or missing by middle school, high school, and even college students?

Why, indeed these lovely youngsters then posting their destructive behavior, and its terrible results, online? Well, thanks to Tiktok, it's the new craze called "Devious Licks". To make matters worse, this awful trend is being too often allowed (because of a lack of granted authority to enforce the rules) by a disempowered LAUSD leadership.

Ditto for disruptive behavior and using cellphones in the middle of class, and to a degree we've never seen before, because...

...children have a RIGHT to a public education, doncha' know, and their enabling parents have gone from the past bringing of their miscreant children to bear to bringing to bear their children's hapless teachers and principals.

Well, the good news, if the LAUSD is smart enough, and tough enough, to use their policy of requiring students to get vaccinated before attending school (in effect as of this upcoming January).

You see, those students will be pulled out of school and directed to an online alternative approach to school. Arguably, the "right" of these misbehaving students to attend school should utilize this new policy to enforce an educational behavior to the benefit of those students and their parents who still favor education.

It would be very nice, indeed, to let students and their creepy parents know they are on notice to "watch their heinies" if they repeatedly morph their school into chaos-ridden environments.

It would be nice, indeed, in this era of no reform schools, to yank any repeatedly-problematic students to an online alternative, and their parents should be the ones to go pound sand for a change.

2) Illegal Street Racing to levels we've not seen for decades:

For those not paying attention, our intersections have been flash mob racers and cheering throngs of a bunch of lovelies who just love the improtu--and downright dangerous--illegal street racings and cars racing loudly and out of control both on our streets and in our vital intersections.

And by the time the hapless LAPD arrives on the scenes, this garbage crowd has usually dispersed.

Clearly, the psychological pent-up citizenry--particularly our youth--is acting out in a frightful way.

But if we let those who DO get caught on the scene go to jail (and I personally don't give a rip if they catch COVID in jail), perhaps a paradigm of negative reinforcement will put an end to this accident/injury-prone series of illegal racing.

3) "Homeless Rights" over the rights of the rest of us to help, but don't tolerate yanking OUR rights away

Gone are the days when homeless rights used to be balanced with anti-loitering laws.

Gone are the days we demanded that our homeless seek shelter and help, or be sent out of the city and/or county of L.A.

Gone are the days when we used to have our sidewalks and streets available for pedestrian and citizen public use.

Gone are the days when we used to value our parks and open space, and even our buses/trains, for the benefit of ALL OF US, including and especially the taxpayers who pay for these governmental services and programs.

Because the homeless, even and especially those flagrantly threatening the rights and safety, deserve "rights" that traditionally have been once-enforced to limit health/safety and transportation/planning related menaces to a once-lawabiding society.

And the rights of the rest of us, who pay good money to help the homeless, only to watch our hard-earned tax dollars be exploited and without ANY cost-effective and efficacious results? Well, screw us "heartless" and "selfish" and "racist" and "bigoted" jerks.

So...welcome to Hell, folks--and it's anyone's guess that this crazy, chaotic behavior will morph back into a reasonable, law-abiding society we've once enjoyed.

The only chance we've got is to elect a new Mayor, City Council, and other Downtown leadership with the spine and decency to take this all on.

Because if elect more "talk to the hand" leaders, we've only got ourselves to blame.