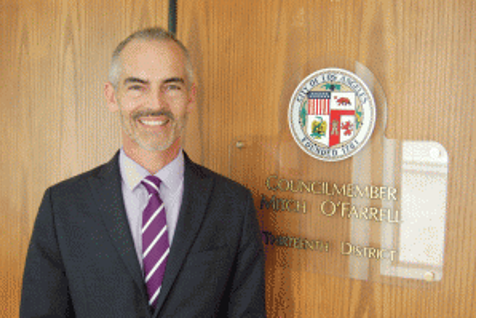 As far as we know Mitchie 0 has not ventured into Beverly Hills or Glendale to destroy their housing base.  Rather, he has focused on his own district.  When one eats his own tribe, the tribe has fewer members.  That is exactly what Mitchie 0 is doing.  Densification is devouring the homes of the poor without the benefits of gentrification.

Gentrification has one virtue – it improves the quality of life for the residents.  The flip side is that it destroys the quality of life of the displaced.  Since CD 13 has lost between 10,500 and 12,500 people since 2010, the densification mania has not improved the quality of life of anyone.  Accurate data is hard to obtain since the city persists in using Lies and Myths.  What it cannot hide is that Mitchie 0 has cannibalized CD 13's existing housing in order to construct crap which virtually no one wants.  When the rent-controlled units are destroyed, the former tenants who become homeless tend to stay near their former homes.  Hence, the accelerated growth in Hollywood’s homeless encampments.

Mini-Me obfuscates the issue for the naive by claiming that 2,000 units of affordable housing were permitted by the city in his district over the last decade.  Notice that “permitted” does not mean “constructed,” and “constructed” does not mean the units were rented to anyone rather than being held as real estate speculation.  Mitchie 0 does not mention how many thousands of poor people’s homes he destroyed for high end projects and boutique hotels.

Let’s be clear that Garcetti and now Mini-Me destroyed the rent-controlled housing causing the Homeless Crisis.  In Los Angeles, no project is approved unless the councilmember for that district places the project on the city council agenda.  Developers cannot destroy rent controlled units without the councilmember’s express approval.

By 2017, developers realized that destroying RSO units came with terrible liabilities which destroyed their Buy Low - Sell High strategy.  The Sunnyslope case from Arizona stopped the Measures HHH and JJJ scam for the city to subsidize market rate housing.  January 15, 2018, CityWatch, Will Sunnyslope Bankruptcy Case Put the Brakes on LA’s Affordable Housing? Briefly, the City borrows from Wall Street, gives the money to the developer to construct “affordable housing,” the developer goes BK and does not repay the city, and then the bankruptcy court makes the entire project market rate with no affordable units.  The Ninth Circuit ruled that if a developer took money to construct affordable housing, the project had to remain affordable, i.e. low rent.  Like Donald Trump, BK was a legal ploy for developers to make money while screwing everyone else.

With an insane zeal for Supply Economics, Garcetti set about destroying Hollywood’s viability following the absurd meme, If You Build It, They Will Come, made famous by the 1989 movie Field of Dreams.  No one noticed that hockey players did not show up in the corn field. If Costner had built an ice rink, no baseball players would have come.  Destroying poor people’s homes to construct dense, high priced housing will not cause rich people to move to Hollywood.  Building a super-sized Pork Emporium in the middle of an Orthodox Jewish community will not persuade Chabbad to eat tref.   Family Millennials want detached homes with yards. Yet, Garcetti and Mini-Me continue to densify Hollywood with apartments and condos.

The Worst Is Yet to Come

Marching under the Woker banner of Cyanide is Good For You, the State passed SB 9 and SB 10.   After killing Hollywood with densification, The Dems decided to extend their plan to the rest of California. Here’s how SB 9 and SB 10 work.

1.)  An old guy dies and his children sell his R-1 home on Hobart north of Franklin and south of Los Feliz to a developer.  The developer pays 160% of market value as he will load the property with four to ten units.

2.)  The sales price goes into the real estate comps so that the value of all homes within a five block radius jump up.

4.)  The entire area becomes unaffordable for families who want a place to live.  Developers will pay 200% of the SB 9 and SB 10 prices.

5.) People wildly cheer the new prosperity of the housing market until the developers cannot sell or rent their units because baseball players do not buy ice rinks.

6.)  Homeowners file for property tax downward reassessment as they are underwater on their mortgages since homes are now selling for 40% less than pre AB 9 and SB 10. b

7.)  The homeless are no longer on Gower under the Hollywood Freeway but now they are next to your R-1 home, breaking into the vacant developer units

You know what happens when property owners are trapped in a deteriorating area and are unable to sell.  Arson!  See South Bronx.

The Fab Four Running for Mayor Endorse the Big Lie

Bass, Feuer, Buscaino and DeLeon all spout the big lie that Los Angeles has housing shortage. They all call for publically financed, dense construction.  They show their compassion with Tiny Homes where a homeless person gets 64 sq feet.  They call it “transitional” which in political-speak means “permanent.”

The root of our woes is Wall Street’s vast corruptionism.  Now that the country is out of Iraq, mas o menos, and out of Afghanistan, the only place to practice large scale Corruptionism is right here in the good ole USA.