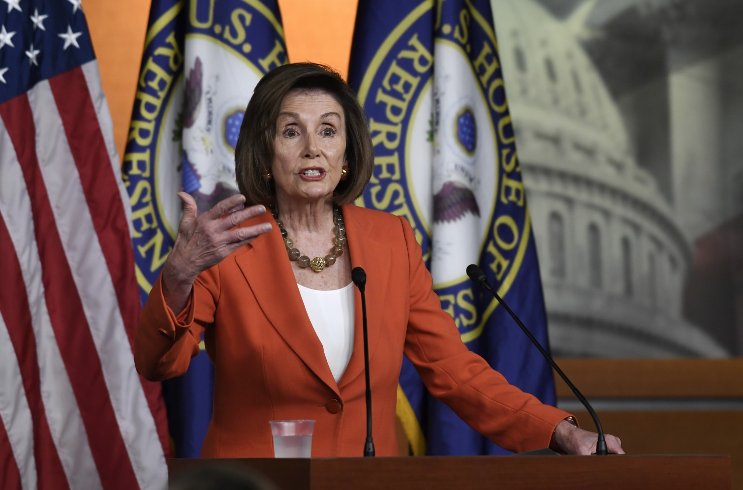 THE VIEW FROM HERE - Few people, if any, have done more to bring about a fatally polarized America where our very existence as a Republic is at stake than Nancy Pelosi.

At every step, Nancy Pelosi has brought extremists to power.  In June 2010, it was clear that Obama-Geithner’s regressive pro Wall Street economic tomfoolery would bring the Tea Baggers to power in Congress. Nancy Pelosi’s Identity Politics, however, added extra fuel to the passions of Tea Baggers.  Money may be the mother’s milk of politics (Jesse Unruh’s observation), but emotionalism brings out the voters.  Stripped down to its core, Pelosi’s Identity Politics has the same message for White Americans as Khrushchev had for America in 1956, “We will bury you.”  Existential threats polarize.

Pelosi and the incipient Wokers, heir to the 1960's and 1970's Victimologists, had different message for the minorities, “We will save you.”   When Woke went mainstream with Black Lives Matters’ protest over the death of Michael Brown in Ferguson, Mo., it meant to be aware of the systematic predatory nature of our institutions.  Pelosi and her ilk misappropriated the term so that it assumed a meaning suited to her political goals.  Woke no longer called to end institutional injustice, but rather to blame all Whites.  The group to which one belonged was all important and individual character counted for squat.

Similarly, the reasonable Critical Race Theory that institutions reflect the values of the creators was perverted to mean Whites are per se bad. If the new CRT cannot identify some racist thing the white person did or even place his ancestors as being in the USA before 1960, the whites are complicit in the evils of slavery as their light skin hue bestowed upon them unearned benefits.

Nancy Pelosi promised Whites that her minority coalition would seize power and take retribution as minorities become the majority of the voters. Since middle class Whites felt the increasing transfer of wealth to the 1% more than poor minorities, many poor and Blue Collar Whites felt under siege.  While the cross-over date of 2044 for when the country would have substantially more minorities than traditional white voters was decades away, Pelosi’s Identity Politics made the threat feel imminent.  The old white lady, who told presidential candiate John McCain that Obama was a Arab, was the canary in the coal mine. She was fearful, misinformed and befuddled, but she would vote.

The Right Wing media was adept at picking up the racist anti-white threat in Pelosi’s Identity Politics and they made certain that every anti-White nuance was broadcast along with a lot insane gibberish.  When the Alt Right could point to Pelosi’s own words and then highlight the most extreme anti-White rhetoric of the evolving concepts of Woke and CRT, many Whites felt an existential threat.

Thanks to Geithner and Pelosi, the Tea Baggers flooded into Congress in the November 2010.  One may not absolve Pelosi or Obama by saying that the Tea Baggers were ignorant Nativists.  Of course, they were.  The role of statesmen is to dampen the ire of the disaffected and to make everyone welcome.  Pelosi, however, was and is obsessed with her own personal power, and social division creates hatreds. Hatred sells.  In brief, the more racial hatred divides the nation, the easier it is for Pelosi’s to remain in power by fund raising.  Jesse Unruh would say – “she who controls the purse decides who gets campaign money.”

The 2012 secret video of Mitt Romney’s complaining about freeloaders was a fatal faux paus.

Forty-three Percent (43%) of Whites had voted for Obama in 2008, many of whom were dependent on the government.  The video re-framed the election as Every Day Good Guy vs the Elitism Snob.

By 2016, the Minority vs Whites Dichotomy Was Firmer

Obama’s regressive economics had devastated the Rust Belt, and Trump provided a champion for the down trodden.  Worse yet, Identity Politics had betrayed hard core Union members.  While giving $15 Trillion to banks, Obama had sent Main Street into foreclosures and bankruptcy.  Their families were plagued by the Opioid Epidemic, fueled by Big Pharma’s greed. “More is Never Enough”   Pulling up her Woker britches, Hillary called the suffering Whites in the Rust Belt, the D-word, “Deplorables.”  Hillary ignored the Electoral College, thereby handing the Presidency to Trump.

The Goldwater Rule does not apply to muckrakers.  Trump is a narcissistic Histrionic (DSM 5, 301.50 Histrionic, DSM 5, 301.81 As the Histrionic PD controls Trump, narcissism becomes the adjective) The GOP leadership hates Trump, and they blame Pelosi for his longevity.  (1) But for Pelosi’s Identity Politics, Hillary would not have called the Rust Belt swing voters Deplorables.  (Trump did not call Blacks the N-word), (2) Pelosi saved Trump from Nixonization in 2019 and (3) She saved him from Senate conviction in 2021.

Pelosi saved Trump during both impeachments by her accurate assessment that if the GOP played any role in removing Trump, the GOP would politically gain and she would lose her most productive fundraising tool – Donald Trump. When it was clear that enough GOP were turning against Trump during the House 2019 Impeachment hearings, Pelosi pulled the plug on calling more witnesses.  The law professors were untied that there was not enough evidence to convict, and thus, the house had to call more witnesses.  It was the character of the witnesses like Col. Alexander Vindman that was turning the GOP tide against Trump.  When enough voters ceased supporting Trump, then the GOP leadership and the Dem leadership (with the Generals standing by) could visit Trump and make a political offer which he could not refuse.  When Il Duce resigns, the extremists become leaderless and the stock of the traditional GOP leaders rises.  As the GOP feared, Trump lost the Presidency for the GOP.

Although the GOP voted to call witnesses, the Dem House managers, i.e. the prosecutors, did not call a single witness.  The GOP desperately wanted to dump Trump, but they needed some of the irate insurrectionists to testify that Trump incited them and then abandoned them.  Only witnesses like the Proud Boys, etc. could turn the  enough of the Party against Trump so that GOP Senators could vote to convict Trump and bar him from running again.  This ploy is known as cutting off the head of the snake. But for Pelosi’s again stopping the proceedings, the insurrectionists would have been called, Trump would have been proven to be a traitor and he would be politically dead.

On May 13, 2021, President Biden Went from Centrist to Woker Anti-White

Biden’s promise was to be a centrist and shun Pelosi’s and the Woker’s vicious polarization. He kept that promise until May 13, 2021 when he backed Rochelle Walensky’s Woker attack on the GOP, blaming them for the pandemic. Washington and most of popular culture communicates by code words.  People understood that Biden was abandoning his centrist approach of Let’s Have Herd Immunity by July 4th in favor of The GOP are Killing Us.  At the time, the CDC and Biden knew the Delta Variant was a game changer.  Rather than leveling with the public, the wokers peremptorily blamed the GOP for the coming rise in the hospital and death rates.  Of course, their renewed polarization made the GOP resistence to both masks and vax infinitely stronger, resulting in the huge Delta Variant surge. The heightened division also destroyed any centrist cooperation on the infrastructure bills, leaving Pelosi and the wokers to call the shots.  Nothing would be worse for Pelosi and the wokers than for Biden to pass his infrastructure bills with some GOP support.

If Pelosi’s departure is accompanied by the demise of the anti-white wokerism in favor of centrist policies, the nation may recover from Pelosism.