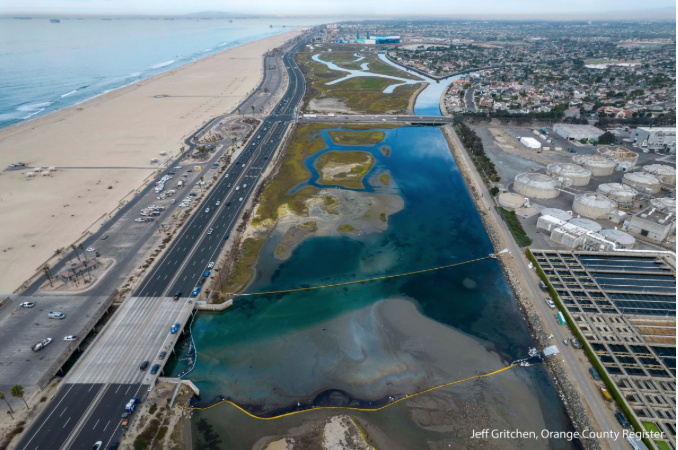 ENVIRONMENTAL DISASTER - Thirty-two years ago, in a triumph of ecological restoration, ocean water rushed into a small, newly restored marsh along the heavily developed coast of Huntington Beach.

That day was greeted with great fanfare, since it was a milestone: A new wetland, created out of degraded scrub, in Southern California, where most coastal marshes have been lost to development.

The little tract of habitat known as Talbert Marsh provides a rare refuge for at least 90 species of shorebirds that forage and rest there — all within sight of oil platforms, barges and tankers off the coast.

Now, for the second time in its short history, Talbert Marsh is slicked with oil. Completed in 1989, the 25-acre marsh is one of a string of rare pearls that make up the Huntington Beach Wetlands Conservancy’s 127 acres, nestled along Pacific Coast Highway.

Oil from the weekend’s massive pipeline spill “is in all three marshes now,” said John Villa, executive director of the nonprofit conservancy. “It’s heart-wrenching … just to see all that work, and now we’ve got the oil within the marshes and it’s doing some damage.”

Starting with more than $730,000 in state and local money,  the non-profit has cobbled together millions in a convoluted mix of funding to painstakingly expand and restore the wetlands over decades.

Now, Villa worries where the non-profit will find enough funding to tackle the oil tainting the delicate ecosystem. He’s hoping for money from the Federal Emergency Management Agency if it declares a national emergency. “Anything else, we’re going to have to go out and get that funding in order to do any of the restoration we need to recover from any damage,” he said.

As much as 130,000 gallons of crude oil spilled from a 17-mile pipeline that connects an offshore oil platform owned by Amplify Energy and operated by Beta Offshore to the port of Long Beach.

“It is devastating to see an oil spill along the coast of Orange County,” said Greg Gauthier, a project development specialist with the State Coastal Conservancy, which has contributed funds for the restoration.

Over the weekend, California’s Office of Spill Prevention and Responseplaced booms, and the conservancy worked with Orange County Public Works department to construct a berm, stemming the flow of oil into Talbert Marsh and its connected wetlands, including Brookhurst Marsh and Magnolia Marsh, Villa said.

Still, the oil seeped in. And on Monday, a sheen could be seen in all three marshes, with Talbert hit the hardest.

“It’s in the riprap, it’s on the islands. We did get a couple of (birds) out of there yesterday that were coated and they came in directly here for treatment,” Villa said.

“It’s heart-wrenching … just to see all that work, and now we’ve got the oil within the marshes and it’s doing some damage.”

David Valentine, a professor of earth science and biology at the University of California, Santa Barbara, called wetlands a “worst case” scenario for oil contamination.

“The long term impacts that I would be most worried about would be in the wetlands and the enclosed environments where you can have more than a transient exposure,” Valentine said.

Experts say damage from oil can linger for years in wetlands. And winter is rapidly approaching — the time when migratory birds rely on these marshes.

A contractor is at work removing the oil from the marshes, Villa said. But replanting damaged plants and treating contaminated soil with sand and gypsum to allow more water to wash through will be a monumental task.

“It’s not like we’re doing a small restoration or small maintenance. This could be 127 acres of maintenance we have to do,” he said.

It’s not a pristine marsh: Smokestacks, industrial tanks and a sewage treatment plant squeeze the small stretch of wetlands next to Pacific Coast Highway. But it is highly valuable ocean-view land.

It’s not a pristine marsh: Smokestacks, industrial tanks and a sewage treatment plant squeeze the small stretch of wetlands next to Pacific Coast Highway. But it is highly valuable ocean-view land. Expansive subdivisions of homes are directly behind the marshes.

The largest coastal wetland in the Huntington Beach area is Bolsa Chica, an extensive stretch of restored salt marsh and mesas that is considered one of Southern California’s great treasures. North of the oil-slicked marshes, Bolsa Chica wetlands have so far dodged effects of the spill as currents move the slick south.

Since Europeans first set foot in California, people have razed, filled, planted and paved more than 90% of the state’s precious coastal wetlands— which provide homes to rare and endangered creatures and plants, pit stops for migrating birds and barriers to protect against rising seas and filter out contaminants.

Damage from the last spill

This isn’t the first time crude oil has contaminated Talbert Marsh. In February 1990, an oil tanker called the American Trader ran aground near Huntington Beach and scraped over its anchor, punching holes in the hull and disgorging more than 416,000 gallons of crude oil. The spill contaminated beaches from Long Beach to Laguna Beach.

Oil contamination increased 10,000 fold in sediments along beaches in Huntington Beach and Newport Beach. Filter-feeding creatures scarfed down the droplets, killing a quarter of small, Southern California bean clams and contaminating sand crabs. Grunion were spotted dying in emulsified oil mousse by the hundreds. Thousands of birds died, which meant even more were never born.

The oil from that 1990 spill damaged some of the salt marsh plants along the high tide mark in Talbert Marsh, where the restoration had been completed only a year earlier, Villa said.

“It could be 10 to 15 years before those plants come back again,” Villa said. “For the most part, on the surface, all the riprap and all the islands and all the vegetation did come back, but it just takes a while.” 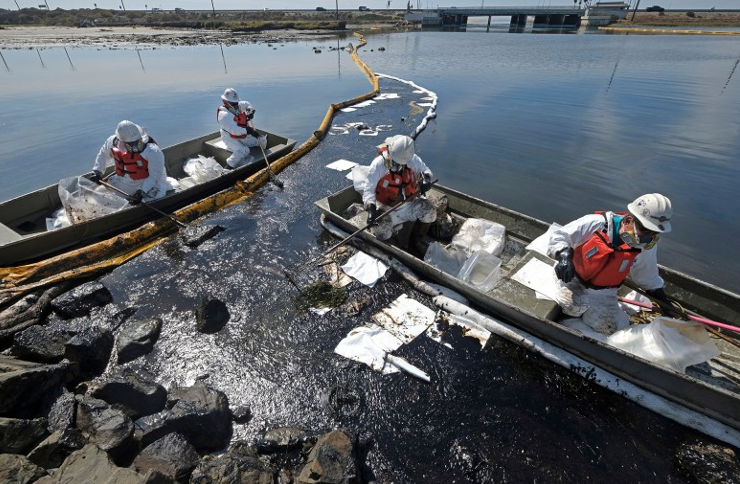 Today, there are some differences — for better, and for worse. This time, the response time to boom and berm the area helped prevent even more severe contamination, Villa said. And now, there’s the Wetlands & Wildlife Care Center, where Villa said oiled birds are being treated.

But the expansion of the wetlands since then, including the recent purchase of the 44-acre Newland Marsh, also means that more are at risk from the oil spill. That includes Brookhurst Marsh, Magnolia Marsh and upper Magnolia Marsh, where pipelines from the nearby power plant had only recently been removed, Villa said.

Villa said the team eventually will need volunteers, who can check for opportunities at ochabitats.org, when it’s clean enough to bring the public back in. For now, the website says, only certified hazmat and rescue teams are authorized to be in the marshes.

As soon as it’s possible, Villa said, “we can go in there and start doing what we can to make sure whatever damage is there is reversed.” 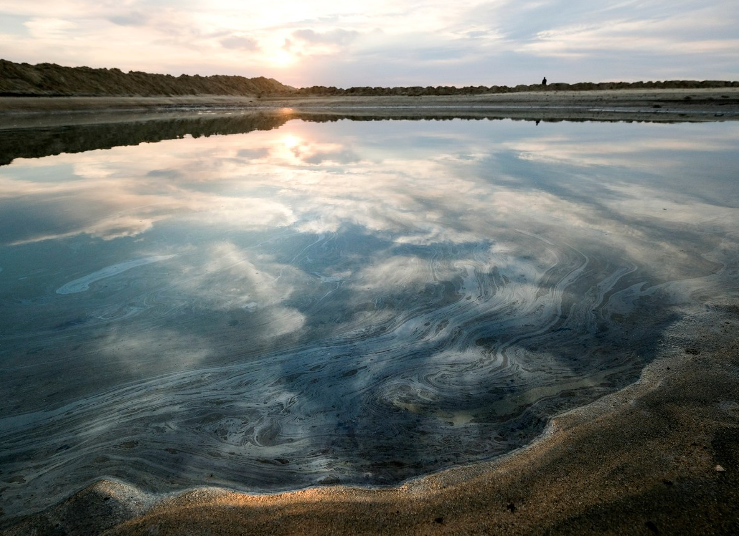 Another massive California oil spill: What you need to know

The last major oil spill off Huntington Beach was nearly 32 years ago — in almost the same spot. California has 23 offshore oil platforms in federal waters and eight platforms and islands in state waters.

Rachel Becker is a reporter with a background in scientific research. After studying the links between the brain and the immune system, (Rachel left the lab bench with her master's degree to become a journalist via the MIT Graduate Program in Science Writing. For nearly three years, Rachel was a staff science reporter at The Verge, where she wrote stories and hosted videos covering a range of beats including climate change, nicotine, and nuclear technology. Her byline has also appeared in NOVA Next, National Geographic News, Smithsonian, Slate, Nature, Nature Medicine, bioGraphic, and Hakai Magazine, as well as the PBS Digital Studios video series Gross Science and the YouTube show MinuteEarth. Rachel is now an environment reporter for CALmatters, where she covers climate change and California's environmental policies.)  [email protected]