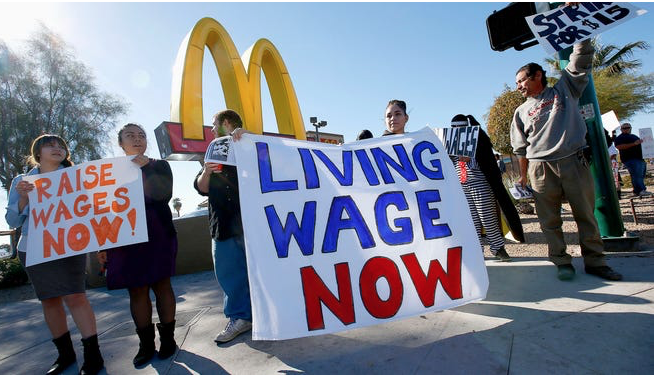 Meanwhile, weeks after this was released to local and state media, poll numbers have not budged for Larry, or the overall recall question, in a just-released CBS poll.

Usually when people talk about eradicating minimum wage, it is met with nonstop cries from the left on how heartless Republicans are, etc. In 2021, despite a high-profile debate moment at Nixon Library, highlighting two frontrunning candidates’ position, it was not met with the usual hysteria. Of course, outlets like the SacBee made hay about frontrunner Larry Elder’s comments on a $0 minimum wage initially, but it didn’t gain traction.

Another leading candidate, John Cox also doubled down on this, showing surprising strength from someone considered weak in his previous run. Maybe Republicans are finally growing some testicular fortitude when it comes to speaking to the average person, or is it the changing political winds? I say, a combo of both.

Only those who are prone to low information snap judgments and hysteria would stop at the “Oh my god, Republicans are getting rid of minimum wage” alarmism that is frankly tired and played out. I remember clearly when I got my first job at Savon Drugs making $5.25 an hour in 1999. I always hoped for higher wages, and as a young liberal, I defaulted to that camp. But it only took a few honest conversations to see the effect of higher minimum wage on society. Forget the business. Forget the “man” we want to rebel against. If we simply keep increasing the minimum wage, we will have inflation and the destruction of value. No one wins in the end.

Maybe people now can finally debate the merits of this argument, especially in light of businesses that have been battered for a year, due to COVID lockdowns. Before the conclusion jumpers default to hyperbole, I urge calm and measure when we approach important nuance.

Do the moral high grounders ever consider the impact of minimum wage to employers, or are they again, quick to vilify business owners? The ones who bear the responsibility of meeting payroll, dealing with regulations and for many, all the craziness that comes from dealing with the public? Or the risk a business owner goes through to simply make it day by day? When I started my own business and hired people under me, I realized how costly it was, to even have someone around. In the end, my employees were making more than I was, but that was ok, because I was in “build” mode. But some businesses never get off the ground, so to vilify these people taking a risk and meeting payroll, is a double slap in the face in light of the risk they took. It was insulting to call me rich just because I was a business owner.

Do the same moral high grounders consider the impact to overall availability of jobs to the average person, especially a young person making their way in the world? There’s a reason “work study” exists now. As an employer, I found myself increasingly becoming emotional counselor and babysitter to those who had no clue how to respect their employer or the clients we were servicing. Entitlement was rampant and the problem is worse today. I would love to have all the time in the world to mentor someone, but sadly, the trains need to be running on time and the employees are too quick to want to advance, leave the business behind and see you purely as the next steppingstone. Do the moral high grounders think about the lack of quality workers and hires, and its impact on the business?

Do the moral high grounders think about how raising the minimum wage ends up hurting workers, when companies end up adapting by having less labor around, and the current employees get overloaded with work? Recently, McDonalds found it so difficult to pay the minimum wage, they chose to replace the employee with electronic kiosks. In the end, it’s a net loss for the worker. In other companies, downsizing headcounts means overloading the remaining employees with more tasks and work. With less jobs available, current employees are expected to stay extra hours.

In conclusion, let me ask this: do the virtual signalers ever consider the negative impact of minimum wage? Or are they simply destroying our society through runaway increases in minimum wage, because it feels good? Once again, do proponents of minimum wage offer solutions or are they just running on the problem and have zero desire for solutions? Working conditions are not perfect, but runaway inflation is not the answer. In addition, I will rebut the Washington Post article: $7.25 is not “paltry” to many people and I have watched many immigrants build a great life from humble beginnings.

(Marc Ang ([email protected]) is the President of the Chinese American Citizens Alliance in Orange County, co-chair of “Recall Gascon Now,” was the Director of Outreach for the “No on 16” campaign, a community organizer in Southern California and the founder of AsianIndustryB2B who specializes in race relations and the minority conservative experience. His book “Minority Retort” will be released in late 2021.) Prepped for CityWatch by Linda Abrams.