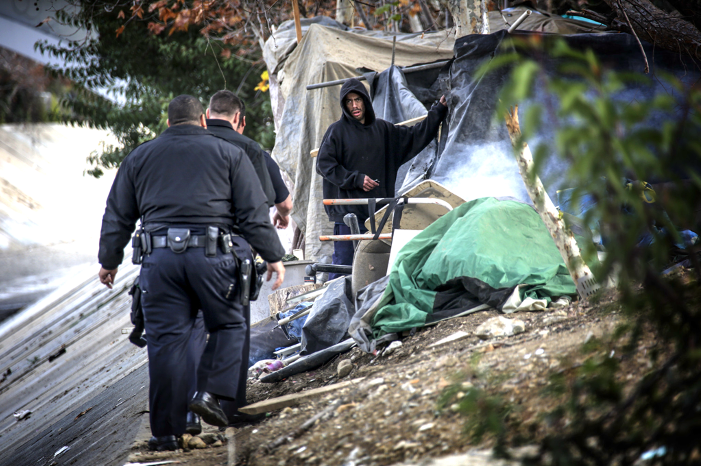 RIGHTS OF THE UNHOUSED-Organizations from across Los Angeles (including U.T.A.C.H, LACAN, LATU, Unión de Vecinos, Reclaiming our Homes, and members of the SNS coalition) gathered at City Hall on Wednesday to protest the City Council’s second hearing of Councilmember Mark Ridley Thomas’s alternate motion that bans sitting, lying down, and sleeping on large swaths of LA sidewalks, leaving the unhoused to ask the question, “Where will we go?”

On Tuesday, June 29, 2021, Councilman Joe Buscaino attempted to revive a motion to amend Section 41.18 of the Los Angeles Municipal Code, to make it illegal to sit, sleep, and lie down on sidewalks in LA. The law would allow individual Councilmembers to ban unhoused folks from being in areas surrounding parks, libraries, schools, freeways, homeless shelters, and other facilities. This motion previously failed because it is unworkable, unrealistic, and unsupported by the public.

Councilman Ridley-Thomas then introduced a substitute motion, supported by: Councilmembers Martinez, Krekorian, De León, O’Farrell, Blumenfield, and Price. This motion is just as harmful as Councilmember Buscaino’s original motion, even though the sponsoring Councilmembers pretend otherwise. Less than three days later, the LA City Council voted on the proposed ordinance with Councilmembers Bonin and Raman voting no. Since the ordinance required unanimous votes to pass on its the first reading, it failed to pass. The ordinance is now headed to a second reading on July 28, 2021, [Council File 20-1376-S1, Item No. 20], when it requires a simple majority to pass.

Amending LAMC Section 41.18 is a flawed, racist law that the City Council adopted in 1963 as an anti-loitering law. The law targets the simple act of sitting, sleeping, and lying down in public, and it is unquestionably a law that targets people who are poor and unhoused. Throughout its history, this law has disproportionately targeted Black and brown people. It is an ordinance that has no place in Los Angeles’s municipal code today.

Although framed as a kinder, gentler version of LAMC 41.18 and different from other proposed amendments to the ordinance, this version is nothing of the sort. While it purports to prohibit camping in only limited spaces, the combined impact of the various limitations leaves unhoused people with very few places where they can be in public, and those places where people can be are subject to selective regulations. This version creates anti-homeless zones throughout the city, including around homeless housing projects and other designated spaces.

As these zones are implemented, this policy will lead to the imminent clearing of encampments, which will displace people from their communities and connections to services. It also ensures a significant increase in confrontational encounters between law enforcement and unhoused people.

The proposed ordinance leaves in place the status quo and ultimately does nothing to remove police from the city's approach to homelessness. In fact, the current draft will increase the City’s reliance on armed officers to clear public spaces, repeatedly if necessary.

The substitute motion to amend LAMC Section 41.18 makes no mention of any new housing resources, wrap-around services, or any other solutions that will effectively address homelessness. Many of the Council members involved in this criminalization have previously committed to “housing first” strategies.

Now, instead of focusing on those actual, proven solutions, City Council members are attempting to expand the same harmful and failed criminalization policies that have exacerbated homelessness for decades. The only difference between this alternate motion and the prior versions is that this one was hatched in secret, without time for the public to provide input. This calls into question our elected officials’ commitment to compassionately address the issue. Seven people drafted a policy in secret that will impact the lives of thousands of the city’s most vulnerable residents.

We reject this ordinance and demand that all processes involved in propelling this motion forward be halted immediately. We demand that City Council and the Mayor’s office instead invest their time and legislative power into programs that provide a healthy and safe living environment for our unhoused communities while they are on the streets and focus on providing transitional/permanent housing opportunities that meet a high standard of living.

(This article is based on a press release for a press conference and rally against amendments to Los Angeles Municipal code section 41.18 at LA’s City Hall on Wednesday, July 28 by unhoused organizers from U.T.A.C.H (Unhoused Tenants Against Carceral Housing). Further information at [email protected].)