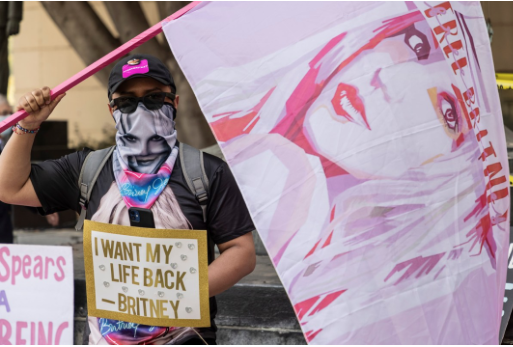 CIVIL LIBERTIES - However improbable, this has become the summer we talk about conservatorship.

As the latest developments in Britney Spears’ 13-year conservatorship dominate the headlines, questions long debated by advocates have suddenly become dinner table conversation. When is it OK to strip people of their rights to protect their welfare? Can we trust the legal system to protect against abuse?

The 39-year-old pop star gave explosive testimony at a June hearing in a Los Angeles probate court, saying her conservators have kept her from removing a birth control device, forced her to take medications and required her to continue performing.

“It makes no sense,” she told the judge. “The laws need to change.”

Even before Spears’ situation captured the public’s attention, state policymakers have debated changing California’s conservatorship laws for an entirely different reason: The increasing visibility of people living on the streets with untreated serious mental illnesses.

Proposed legislation that would change the state’s “grave disability” standard to make it easier to conserve people with serious mental illness has been tabled this year. Meanwhile, a bill inspired by the Spears case that requires increased transparency and stricter accountability continues to move through the Legislature.

These seemingly incongruous conservator situations in California have generated a lot of confusion. Is it too easy to put people on conservatorships — or too difficult? Does the process violate people’s rights — or keep them safe?

People on all sides of the conversation agree change is overdue. But their visions of what the problem is — and where the solutions lie — often vary.

What is a conservatorship, anyway?

A conservatorship is a legal arrangement in which a court appoints a representative to make decisions on behalf of the “conservatee,” a person deemed so cognitively impaired due to dementia, intellectual disability or serious mental illness that they cannot make decisions independently. These include everything from the rights to make medical and financial decisions, to control of basic life choices, like where to live and whether to have sex or marry.

In some states, such arrangements are referred to as “guardianships.” In California, though, that term is reserved for arrangements involving children.

How does conservatorship work in California?

In the Golden State, there are two types of conservatorship.

By contrast, Lanterman-Petris-Short conservatorships are designed for people with serious mental illnesses who are so “gravely disabled” they cannot provide for food, clothing and shelter. These conservatorships, which are also decided by county judges, must be renewed annually. They get their name from a 1967 law, proposed by Republican Assemblyman Frank Lanterman and Democratic Sens. Nicholas Petris and Alan Short, that established strict criteria for involuntary treatment.

We’re celebrating six years of providing free, fair and accessible news that informs Californians and empowers them to engage with their state government. We couldn’t have reached this moment without our supporters. Support our mission with a donation during our birthday month.

The two types of conservatorship are in many ways distinct systems, said Alex Barnard, an assistant professor at New York University’s Department of Sociology, who is researching conservatorship in California. But because they share the same name, he worries the public is currently conflating “apples and oranges.”

Both types of conservatorships can involve public guardians, private professionals or family members. But private conservators are much more likely to be involved on the probate side, especially in situations like Spears’ in which a lot of money is involved, said Scarlet Hughes, executive director of the California State Association of Public Administrators, Public Guardians and Public Conservators.

“Public guardians would never get appointed on a case with that kind of money,” she said.

How many people are on conservatorships in California?

No one knows for sure. And most people agree that’s a real problem.

“It’s a big thing to be put under a conservatorship,” said Zoe Brennan-Krohn, a staff attorney with the American Civil Liberties Union’s Disability Rights Project. “You’re losing your civil rights, your liberties, your autonomy. It’s a really big problem that there’s so little data about something that’s so major.”

That doesn’t mean there are no statistics. According to the state Department of Health Care Services, data self-reported from counties showed that 1,459 people were on temporary Lanterman-Petris-Short conservatorships in 2019-20, and 3,672 were on permanent conservatorships. But some experts say the data is inaccurate — for instance, last year many counties, including Los Angeles, the state’s biggest, didn’t report at all.

Assemblymember Evan Low, a Democrat from Campbell, is carrying Assembly Bill 1194 this year to address this apparent lack of transparency, calling for a report that would explain what is working with California’s conservatorships, what isn’t, and how many people are affected.

“We want to pull back the curtain,” he said. His legislation also includes provisions to preempt conflicts of interest —  preventing courts from allowing conservators to pay companies in which they have a financial stake.

A push for more transparency and accountability is also underway nationally.

“It’s a really big problem that there’s so little data about something that’s so major.”

“Ms. Spears’ case has shined a light on longstanding concerns from advocates who have underscored the potential for financial and civil rights abuses of individuals placed under guardianship or conservatorship,” they wrote.

House Republicans called for a hearing on the issue in the spring, and U.S. Sen. Ted Cruz weighed in on his podcast, calling himself “squarely and unequivocally in the camp of #FreeBritney.”

Is it too easy to get someone placed on a conservatorship? Or too difficult?

It depends on whom you ask — and the type of conservatorship.

Some believe it’s too easy to get someone on a probate conservatorship, as Spears is. And once the decision is made, there is no annual expiration and renewal process for the arrangement.

“Having a situation with very little oversight where one person has extraordinary control over another person is just a recipe for abuse,” said Brennan-Krohn of the ACLU.

Instead, she wants to see more resources for less restrictive treatments that address trauma and the need for housing. She also wants the law to outline less restrictive options that must be attempted prior to conservatorship, including a process called supportive decision making. Nine states have that in their code, she says, though California isn’t among them.

Critics of the probate system, in particular, have long warned of abuse. In 2005, the Los Angeles Times published an investigation highlighting widespread abuses within the conservatorship system.  In response, the Legislature passed a series of revisions in 2006. But many of the promised changes and increased oversight were never funded due to the 2008 economic recession, Assemblymember Low said.

Randall Hagar, legislative advocate and policy consultant for the Psychiatric Physicians Alliance of California, says it is “extraordinarily hard” to get someone onto a Lanterman-Petris-Short conservatorship. The standard of proof is “very high,” he said, and the amount of information required to meet that standard is “voluminous.” Court investigations take close to 30 days, he said.

Because of this, many family members who are trying to get loved ones with serious mental illness onto such conservatorships want to see standards loosened. In recent years, several bills in the Legislature have sought to modify the law, focusing on expanding the definition of who can be considered “gravely disabled.” A 2020 state audit disagrees with this premise, and bills that would change that definition have been tabled for this session.

Teresa Pasquini, whose adult son Danny has been under a Lanterman-Petris-Short conservatorship for 20 years, said she watched him suffer through arrests and homelessness and violence for years, and worried he would eventually die. She fought for the conservatorship that she says has allowed him to stabilize and get the care he needs.

“Because of the conservatorship, he was saved,” she said. “That was again just luck and heroics and relationships. That’s not policy. That’s not standards.”

Is Britney Spears’ conservatorship the exception, or the rule?

Again, it depends on whom you ask.

Most people on conservatorships, Low agrees, “are not 39-year-old multimillionaires. There’s only one Britney Spears.”

But he, like some disability rights advocates, thinks her case points to problems within the system. Since he introduced the bill, he said, he’s had “countless calls” from family members and individuals in similar circumstances.

“I don’t think it’s that much of an outlier,” said Brennan-Krohn of the ACLU.  “Of course there are parts that are – the attention, the wealth, the fame, the talent. Why I’ve been following this case closely, why the ACLU got involved in this case, is what we see in it that’s really, really familiar.” The Spears case is a “very good catalyst” for reform, she said, because “it actually happens to people all the time.”

But others caution against conflating Spears’ situation with that of someone who is homeless and living with serious mental illness.

“Any sort of reform that’s based on meeting the needs of Britney Spears seems to me to be really hazardous,” said Barnard of NYU.

So how should the system be improved?

Many people who work within the conservatorship systems argue that the process works—it just lacks resources.

“My fear is that people aren’t going to trust the courts to do the right thing,” said Judge Mary Thornton House, who worked in Los Angeles County Superior Court for 22 years, including eight years in probate court. “And that would be a tragedy.”

House said she thinks the public should worry less about the mechanics of the process, and more about budget cuts. It would be wonderful if probate courts could review cases more frequently, she said, “but where do you find the court resources to do that?”

Hughes, of the California State Association of Public Administrators, Public Guardians and Public Conservators, said most of her colleagues are “fervent supporters” of self-determination rights, and don’t conserve anyone unless it’s absolutely necessary to meet that person’s basic needs.  But she said “there’s a desert of options” for placement of people on Lanterman-Petris-Short conservatorships, including a shortage of board-and-care homes, locked facility beds and other types of care. Next year’s state budget includes $805 million for counties to invest in buying, building or fixing up board-and-care homes.

“It’s absolutely a crisis,” she said. “People are sitting in acute care hospital beds much longer than they should because there’s nowhere else to put them.”

A shortage of funding for conservators is also a problem, she said. Due to staffing issues, many public conservators can’t check on their clients as often as they’d like, she said. For three years in a row, Hughes said, her organization has asked the state for money to address that issue without success.

(Jocelyn Wiener writes about health and mental health for CalMatters.org, exploring the intersection between government policies and people’s lives. She has worked as a reporter in her native California for... More by Jocelyn Wiener)