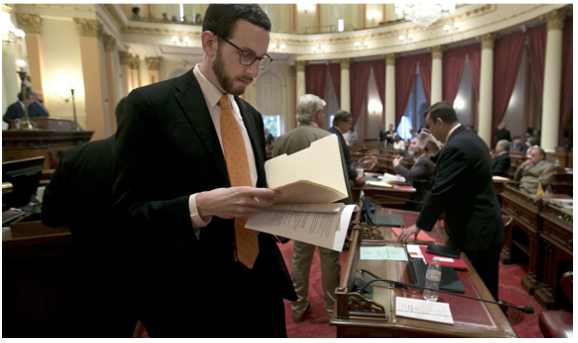 PERSPECTIVE-If you either read Margaret Atwood’s novel, The Handmaid’s Tale, or watched the adaptation and expansion of the story on Hulu, you will know the Latin translates to, don’t let the bastards grind you down.

In the despotic nation of Gilead (formerly the USA), women have been reduced to servitude, both domestic and sexual, the latter role filled by Handmaids, as they were referred to by the religious fanatics who comprise the government. Any attempt to push back is brutally crushed.

The protagonist, June Osborne, finds the Latin inscription scratched in the closet in her room. It was left by the previous Handmaid, who committed suicide rather than bear further degradation. June internalizes the words and resolves to convert them to action.

State Senator Scott Wiener and Senator Toni Atkins, who is the President pro Tempore – another bit of Latin -- have been trying to oppress and marginalize owners of single-family properties. You might say they think of us as their Homemaids.

Their strategy is simple: keep introducing new bills to replace the ones halted in previous attempts. Eventually, we will get tired of fighting back.

Just grind us down until we capitulate.

First there was SB 50, introduced by Wiener in 2018, followed by the Son of SB 50 the following year when the father didn’t advance. Atkins was instrumental in the bill’s revival. The only difference between the two versions was the new one allowed cities some latitude to manage the details of up-zoning as long as they met 50’s overall density requirements.

When 50 ultimately failed, Wiener replaced it with SB 902, which would have brushed CEQA requirements aside to facilitate triplex and fourplex projects in low density neighborhoods. He did not stop there. He and his allies also introduced eight other bills, which collectively not only replicated SB 50, but broadened its objectives.

For residents opposed to pushdown density from Sacramento, fighting nine bills was like going to a gunfight with a six-shooter against an opponent whose automatic weapon was fitted with a high-capacity magazine.

Two of the bills made it to the Governor’s desk, but it could have been worse. Three bills failed to advance because the clock had run out. All of those bills had enough votes. If they had managed to eke across the finish line in time, they would have been signed.

Not satisfied with a two-for-nine performance, Team Atkins and Wiener went on the attack again.

SB 9 allows 4-6 units where only one previously existed. It had an unexpected ally in Senator Bob Hertzberg who voted for it despite overwhelming opposition to it in his district. Since he is termed out, you would think he would not have been afraid of Atkins and instead supported his constituents. What’s the deal? To his credit, though, he opposed SB 10.

SB 10 allows up to 14 units on almost every property in transit rich areas, that is, those within a half-mile of a transit station.

SB 478 would allow developers to raze older, affordable apartments and replace them with small, but upscale apartments.

Those who support single family and low-density neighborhoods can only dodge so many bullets. They can only do so much without the cash developers have at their disposal to contribute to senators and assembly members. Fatigue may ultimately take its toll.

Have the bastards ground you down yet?

Like June the Handmaid, let’s stay in the fight.

(Paul Hatfield is a CPA and former President of the Valley Village Homeowners Association. He blogs at Village to Village, Billion Dollar Bungle | (wordpress.com) and contributes to CityWatch. The views presented are those of Mr. Hatfield and his alone and do not represent the opinions of Valley Village Homeowners Association or CityWatch. He can be reached at: [email protected].) Photo: Rich Pedroncelli / Associated Press. Prepped for CityWatch by Linda Abrams.