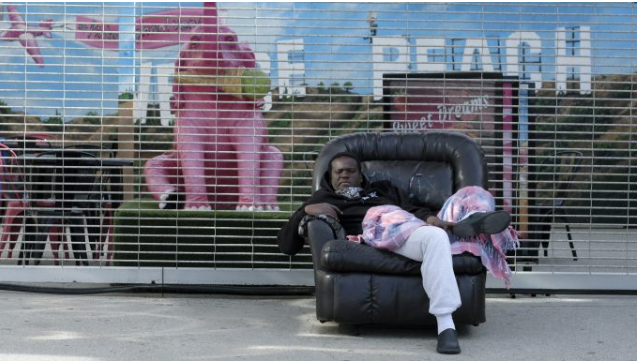 ALPERN AT LARGE-Rules are meant to be broken, so the saying goes. But without the rules, and without the law, what do we have? Venice Beach.

For those who want to use the tired old memes of "the rich don't care" or "we need to understand them"...just...please...stop. We pay, we talk, we preach our compassion and put our money where our mouth is. And again. And again.

So there's a reason why L.A. County Sheriff Alex Villanueva is suddenly a hero to miserable, exhausted and forlorn Westsiders who just want a Venice Beach that isn't a breeding ground for intravenous needles, human feces, and infectious disease that has no place in a civilized society.

When Sheriff Villanueva deployed deputies into the Venice Boardwalk to clean up and remove the individuals and their encampments that had no business being there, he was overwhelmingly supported by residents throughout the political spectrum who just wanted their own freedom and civilization back.

And who fired back in opposition to the most simple and basic responsibilities of government and law enforcement? One CD11 Councilmember Mike Bonin, who has since his re-election changed from one of the most popular to one of the most despised City leaders in recent history.

Hence, we have a newcomer, Sheriff Villanueva, whose political star is clearly (intended or not from this crisis) rising in his response to Venice Beach and the homeless...while the longstanding star once seen in Mike Bonin is crashing down to the ground in pieces.

Bonin used to be adored and respected by his neighbors in Mar Vista as much as his predecessor Bill Rosendahl...and now he is both persona non grata and also nowhere to be seen at community gatherings for years (well before the pandemic).

And like newly-elected and now universally-hated D.A. George Gascón, Mike Bonin is being recalled.

Contrary to the spinning and debating that ensnares us all in how Venice Beach is OUR fault and OUR problem, it never was.

Similarly, though the L.A. Times--which probably is much of how Southern California's "thought leaders" led us into our modern-day morass--might say otherwise, Venice Boardwalk trash and crimes and homelessness always DID have easy solutions.

There just wasn't enough political will and adult, ethical, and scientific maturity to do what had to be done.

And that is especially true for those living there who are not from California.

Venice Beach is all over the national news and local news outlets because of its tragic nature, but it's pretty obvious for any educated individual that it was merely political will that was lacking all along.

And it was never for lack of money. Measure H? Measure HHH? Now $12 billion from Sacramento to deal with homelessness, which most rampantly runs wild in locations such as Venice Beach?

And that reason is simple: without all this "civilization" our health, lifespans, and quality of life all go straight DOWN.

It's just as simple as recognizing how "nice" a law-abiding society usually is, and how forgetting all that leads to a Chaos that was entirely avoidable on Venice Beach.