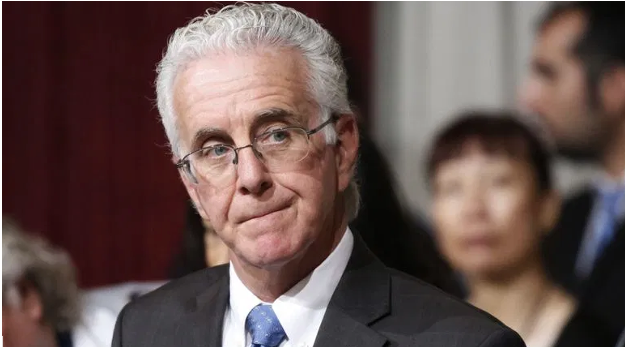 THE CITY-The Homelessness and Poverty committee called a hurry up huddle for June 10, 2021, at 1 p.m. to be held right after their regularly scheduled 10 a.m. regular meeting, but cancelled the Special at the last minute, kicking the matter over to Paul Krekorian's Budget and Finance Committee.

The item they were speeding up -- and then slowing down --- was a Motion by Bonin and Ridley-Thomas to add funding for housing and shelter interventions for an Encampment to Home Program at Ocean Front Walk and Venice community (CFM 21-0600-S99).

Zeitgeisty. That is the section of town where LA County Sheriff Alex Villanueva has promised to power wash away the encampments by the 4th of July.

The benefit to calling a Special meeting is there is no requirement to provide general public comment and the agenda can be posted with only 24 hours’ notice. The last Budget and Finance committee meeting on June 7, 2021, was also a Special meeting agenda. Odd because it was at the usual regular meeting time of 2 p.m.

The Fourth Financial Status Report for Fiscal Year 2020-21 (20-0600-S94) was on the agenda and the whole city shuddered and sighed when Bob Blumenfield, Kevin Deleon, and Monica Rodriguez had no questions at all. Zero.

Krekorian, pretending to be surprised, called up only two of the city departments, Department of Neighborhood Empowerment (DONE) and Transportation. DONE punted to the City Clerk as to whether the $10,000 rollover of unspent NC funds was still in effect and Transportation confirmed that their request for money to meet payroll had to do with events coming back online as the pandemic comes to a conclusion.

"Do you know how many councils have underutilized their funding? Have they all exhausted. . .or underspent!” Krekorian mused.

Raquel Beltran, the GM of DONE had no idea.

The call-in information was read in and then Krekorian announced what appeared to be a technical problem or glitch as not a single public speaker had called in. Zero.

A quick slam through of the office of finance recommendation to escheat $470,000 from money that LAPD took off of incarcerated people but never bothered to return followed.

Krekorian had one more question, "Do we need to vote on noting and filing items? Because of virtual meetings? I always forget.”

Everyone agreed that it would be best to vote because of the pandemic, out of an abundance of caution.

Then Krekorian went back to public comment, deadpan: "First caller. . ."

"Sir, there are no attendees. . .ITA says it is working. . .and we called in and it works, so we are live,"  said the clerk. “There are zero callers.”

“Well, then without further ado, we'll close public comment,” a dejected but also psyched, Krekorian said as he took the committee to closed session after a quick CAO topper of $25,000 to the great CD10, home of gust-master extraordinaire Mark Ridley-Thomas, to cover some administration and outreach.

After the closed session an attorney came on chuckling, "All good, thank you. I just don't want to incur any more costs. Haha.”

It was not as quiet at Mr. Ridley-Thomas Homelessness and Poverty committee meeting. He reminds me of the card shark who sets up his folded cardboard box for a round of three-card-monte but folds it up when he spots someone from the "public police" coming by.

The cancellation of the special allowed him to focus on his regular meeting.

Zev used to shamelessly posture with his frenemy Mark Ridley-Thomas, by quoting John Wooden about not confusing "activity with achievement."

There was a lot of activity on this day. DeLeon noted the $750,000 per unit cost of some housing in his district with disdain but the committee was most disgusted by the state of LAHSA relations.

The solution was to hear directly from Arlene Barrera the county auditor controller and Heidi Marston the executive director of LAHSA, a joint powers authority put in place in 1993 when the city sued the county over the homeless crisis.

LAHSA, 2021 needs work and Miguel Santana of Weingart who promoted the Greater LA group who had commissioned a report from Raphe Sonenshein of the Pat Brown Institute.

Sonenshein who defines “usual customer” made it very clear that governance, not homelessness was his area of expertise.

His conclusion, after months, what’s missing is. . .the center!

His proposal for a small board comprised of independent free standing, non-bureaucratic, community-based . . .the presentation is being dusted off for June 18th so I won’t ruin it for you. It’s a move around.

“It’s as if someone came down in a spaceship and asked, “where can I find out about our homelessness crisis?” there would be one of those signs with arrows pointing in all directions.”

Not anymore! Introducing  “the center!”(Maybe we’ll have a contest or lottery.)

Lossa Booze in the Flidgelator

Monica Rodriquez and Kevin Deleon and Nithya Raman were upset that despite a massive fortune invested in LAHSA and CES nobody could answer as to how much of the county's H money was flooding into City of Los Angeles.

Miguel Santana who has shimmied over from running the LA County Fair for an ungodly sum of compensation to doing the good work as CEO of the Weingart Foundation -- not to be confused with the Weingart Center on Skid Row.

Ben Weingart was a self-made man who moved here from Kentucky.  He converted to Christian Science as a child, although he supported many Jewish causes later in his life. He became one of the richest men in California, building a fortune and the Weingart Foundation. A philanthropic organization that he started in1951 to provide grants and support to various charitable causes.

In 1949 he partnered with Louis Boyar and Mark Taper to acquire 3500 acres of agricultural land near Long Beach. The group formed the Lakewood Park Company and with financing from Prudential Insurance, built 17,000 affordable homes in the new community of Lakewood, California.

From his office at 1301 Wilshire, at the corner of Witmer, in Downtown Los Angeles, Weingart operated his real estate empire through a corporation called “Tragniew,” (Weingart backwards).

He owned or controlled many real estate assets, including Consolidated Hotels Corporation, a holding company that operated several modest hotels on Skid Row in Downtown LA, as well as many shopping centers, office buildings, and more than two hundred apartment buildings throughout the city.

On top of everything else he was an inventor who developed a "high-speed computing counter, and registered patents for various other inventions, including a vacuum cleaner that could reach under furniture."

That’s what Monica Rodriguez and Kevin Deleon could have used in committee as they spent the whole meeting at full power with the extra sucky nozzle.

What is LAHSA 2021 not 1993? "Amendments to increase funding resulted in delays."

The budget has swollen but the problems keep growing.

"We have the big number conversations, yet we don't know what we get?"

Deleon was concerned about proportionality and equity. We are in 2021. . .when folks ask for receipts, they can't get them. It's a simple question. An honest question. How much of LAHSA money goes to City of LA? We have 3/4 of the crisis in our city limits. . .nobody can answer."

Ridley-Thomas interrupted several times, "My view. . .the CAO of the City of LA and Galperin have to dig it out!"

He said he was not comfortable with County answering. . .for us (at the city.) MRT said the County can't play "hide the ball... the City can back out. . .if they won't give the info. There is no Joint Powers Agreement JPA without the city's engagement.

Deleon cornered Heidi Marston who didn’t mind, ”You could provide us the receipts? If the CAO CLA . . .can't, you could do it, Heidi, right? If you don't have them. . .nobody can.”

"We can break down the Measure H funding. . .and what goes to the city."

Deleon said, "It's that simple?"

Introducing the "Bezos, you asshole, this one's on you initiative." Not to be confused with the $28 million seat in the spaceship program.

Here's how it works. You and the giving pledgers buy up some properties and fix the rent at $800/month for perpetuity. You do it until the problem goes away. End. Of. Story. Need some cities. Los Angeles can be the pilot program.

(Eric Preven is a longtime community activist and is a contributor to CityWatch.) Photo: Alb Seib/LA Times.