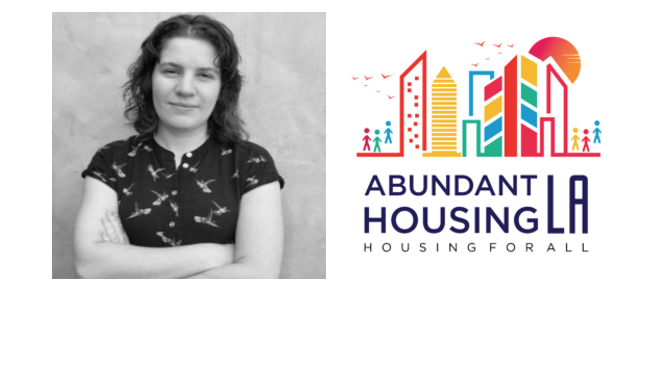 GUEST WORDS-I am writing to express my concerns regarding the participation of Ms. Leonora Camner (photo, above left) on the Santa Monica Housing Commission.

It appears that Commissioner Camner is a political lobbyist, and a salaried Executive Director of a 501 (c) (4) organization called Abundant Housing LA.

However, to date, Commissioner Camner has not disclosed her position with Abundant Housing or her salary, on the form 700 (Statement of Economic Interest) filed with the City of Santa Monica.

Abundant Housing LA appears to be a local outpost of California YIMBY, a statewide lobbyist organization which appears to have the financial backing of Big Tech and the Real Estate industry.

The following is excerpted from the October 11, 2019 Abundant Housing LA letter to the Southern California Association of Governments:

. . .AHLA concludes that SCAG's Draft Methodology's reliance on "local input" depresses an appropriate calculation of projected housing need to increase RHNA numbers, creates barriers rather than access for lowincome residents, accelerates rather than avoids displacement, and inhibits rather than affirmatively promotes fair housing.

AHLA respectfully urges SCAG to adopt a new allocation methodology that does not rely upon any "local input" by evaluation projected housing need based upon a combination of factors raised by Paavo Monkkonen, et al. in their letter of August 31, 2019 to the Honorable Bill Jahn.

Attendees have witnessed Ms. Camner inject her organization's interests into many meetings of the Housing Commission, as well as her own personal interests as a salaried employee of Abundant Housing LA. As a Housing Commission member, Ms. Camner regularly engages in this practice through commissioner handouts, presentations, motions and voting.

Per Santa Monica local requirements, Ms. Camner should be registered as a lobbyist, but she is not.

What is a lobbyist?

SMMC Section 4.85.010 defines lobbyist as any individual who receives economic consideration as the employee, representative or contractor of a person or entity, other than the City of Santa Monica, for communicating with any official or employee of the City for the purpose of influencing a City action. "Lobbyist" does not include City contractors and those seeking City contracts through bids and proposals.

Why do I have to register?

Regulation of lobbying activities helps ensure governmental transparency and thereby fosters public confidence in government. The purpose of the law is to provide the public with information on contacts with government officials.

Who is required to register as a City of Santa Monica lobbyist?

Individuals who receive economic consideration as the employee, representative or contract of a person or entity, other than the City of Santa Monica.

Some examples of those that should register include:

As a political lobbyist on fundamental housing issues, Ms. Camner does not seem to belong on the Housing Commission. Commissioners are supposed to represent the interests of the community, rather than perform as hired guns who advance their employer's political agenda in order to influence the City's legislative process.

(Olga Zurwaska is a Santa Monica based observer and writer on housing issues.) Photo: Abundant Housing LA. Prepped for CityWatch by Linda Abrams.