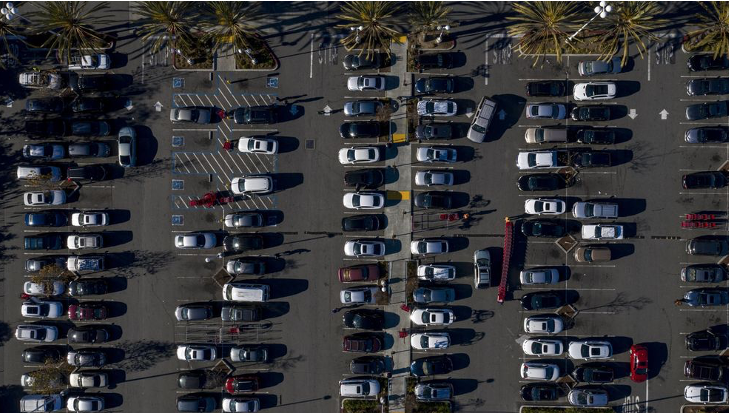 By eliminating parking requirements, they’re going to build “paradise instead of a parking lot.”

If their suggestion and rhetoric seem too plump and unnuanced, perhaps we would do well à la Joni Mitchell to first try to look at things from “both sides now.”

The authors use various forms of the word “affordability” in connection with housing no less than seven times and make climate change references at least 12 times, with the implication that eliminating parking requirements will somehow itself create housing affordability and mitigate climate change.

The supposed promotion of “affordable” housing by eliminating parking requirements is one of presumed cost: it’s expensive for developers, the argument goes, to build parking. By allowing them to build housing (and commercial developments) without parking they will save money and tenants will pay less. Of course, this assumes that developers will pass the savings along to tenants rather than enhance profits by pocketing them. Perhaps the authors have more faith in the altruism and Community-mindedness of for-profit developers than I do.

The environmental argument makes an “if you don’t build it, they won’t come (or drive)” assumption, ascribing to cars per se the villain role in carbon emissions and climate change.

In talking about “America’s love affair with car culture,” (and implying that it is irrational), the authors, however, ignore the car’s purely utilitarian role as a convenient form of transportation. Their attempt to diminish using cars as a form of transportation somehow assumes that public transit alternatives are the rational, equally effective forms of transportation that residents eschew because of the irrationally romanticized connection Americans supposedly have with the automobile.

And yet all one needs to do is look at the real-world results of the “Google maps test” to understand why people choose to drive.

If I wanted to get to the LA County Arboretum from my home, near Pico/Robertson, it would take me 39 minutes to drive. Public transportation would take 2 hours and 18 minutes.

For many, the choice to take the car comes from purely practical considerations.

Consider that driving to the Wimbledon Tennis Club and Museum from Hyde Park Corner in London would take 54 minutes, while using public transit would take 39 minutes, according to Google maps.

Putting roadblocks to using cars without offering a reasonable alternative is not only bad public policy, it also can impact the ability of residents to pursue upward mobility, as indicated in a 2018 UCLA Institute of Transportation Studies report:

Forcing people into longer transit times isn’t only bad for “productivity,” which the Urban Growth Machine traditionally uses to justify urban supremacist policies of forced densification, but it’s also a disaster for the quality of life of those forced to spend more time in transit.

And while it’s one thing to look at reducing parking requirements to reflect new data and changing habits, it’s another thing entirely to try to “cure” overparking with underparking.

Considering that many people are likely to continue choosing to own cars because of the convenience, the elimination of parking requirements could, in fact, have the exact opposite of its intended effect. Motorists circling the blocks of neighborhoods looking for street parking could create more traffic, while themselves adding to carbon emissions in their block-circling treasure hunts.

Placing the burden of private development on the public in the form of more cars on public streets, as opposed to private garages, also means less space on streets for bikes, pedestrians and other forms of multi-modal mobility.

If Assemblyperson Friedman is serious about her stated goals, she should be open to two amendments which would serve to make those stated goals more than an alibi:

Normally urban growth requires added infrastructure. While -- if we really care about housing affordability and climate policies -- we would be wise to question “fairytales of eternal economic growth,” Friedman and Shoup are proposing reducing the level of infrastructure while also supporting unchecked growth.

Yet without additional measures to ensure that the stated goals have some reasonable chance of being achieved, AB 1401 is simply government by buzzword, blurb, and meme, which neither rationally analyzes the issues it purports to solve nor deals with the host of unintended (or perhaps intended?) consequences it creates.

A case in point is the bill’s exempting commercial developers from providing sufficient parking; perhaps this provision provides a clue.

It’s not just fans of Bernie Sanders who love free shit. Developers love free shit, too, and for whatever reason politicians in California seem to love to give them free shit.

Professor Shoup has made a name for himself by talking about the high cost of free parking. The irony here is that he evidently wants to give it away for free to developers at the expense of the public and communities.

Yet rather than using the trendy demonization of the automobile as a basis for public policy, it makes a lot more sense to work towards making all forms of mobility, including cars, more environmentally friendly and sustainable, and to deal directly with the root causes of housing unaffordability.

Clearly, auto emissions are a major source of pollution, so the goal of reducing automotive carbon emissions is a good and necessary one. And while it is doubtful that AB 1401 in its current form would reduce carbon emissions from cars, we should focus – as California has done – on greater fuel efficiency, better public transportation and ultimately the electrification of cars as a means to promote environmental sustainability.

Housing affordability and environmental goals can also both be served through taking advantage of the potential of remote work, which has experienced a broad proof-of-concept during the pandemic.  Remote work can offer residents more housing-lifestyle choices, can reduce or eliminate commuting time, and can promote economic balance and geographic equity throughout the country.

Anti-speculation housing policies, which focus on putting people over profits, can also expand homeownership by making housing more affordable, as well as contribute to creating truly stable and sustainable communities whose well-being does not have to depend on those climate-damaging fairytales of eternal economic growth.

Sadly, AB 1401’s blanket elimination of all parking requirements for the benefit of for-profit developers and corporations will not lead to “paradise,” but more likely to a “scared, hard-edged rat race,” to use Joni Mitchell’s words.

Perhaps it’s time to take her wisdom to heart before proposing measures which are more polemics than real-world solutions:

“Good or bad we think we know,

As if thinking makes things so!

All convictions grow along a borderline.”

(John Mirisch has been a member of the Beverly Hills City Council since 2009 and has served three terms as mayor. He is currently a garden-variety councilmember.) Photo: David Paul Morris/Bloomberg. Prepped for CityWatch by Linda Abrams.