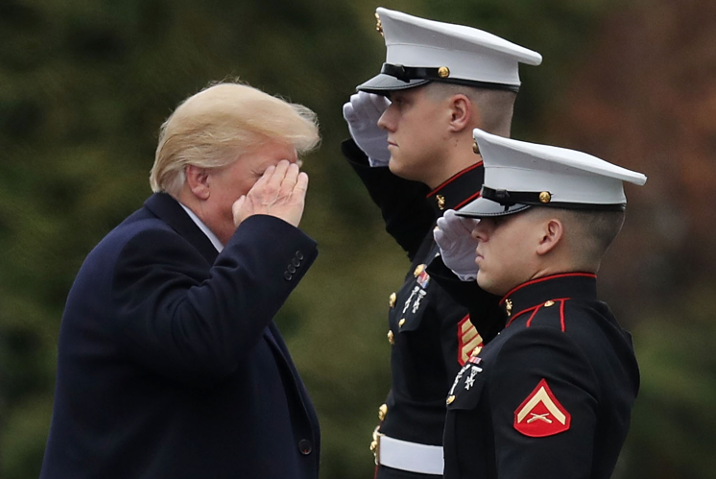 GELFAND’S WORLD--It's a curious story. In the waning days of his presidency, Donald Trump turned himself into the first 1960s anti-war radical president.

The first Hippy to control the oval office. It involved a presidential order to send all the American troops home from multiple overseas posts. Think of that -- the dream of all those anti-war radicals of the 1960s would finally come true, except that Trump ultimately backed down on what he had wanted to do.

"John McEntee, one of Donald Trump's most-favored aides, handed retired Army Col. Douglas Macgregor a piece of paper with a few notes scribbled on it. He explained: "This is what the president wants you to do."

"1. Get us out of Afghanistan.

"3. Complete the withdrawal from Germany.

"It was Nov. 9, 2020 — days after Trump lost his re-election bid, 10 weeks before the end of his presidency and just moments after Macgregor was offered a post as senior adviser to acting Defense Secretary Christopher Miller."

Isn't it a curious thing that Donald Trump, who calls himself a Republican, was casting himself as a 1960s radical leftist when it came to overseas troop placements? It reminds me of George Carlin's parody song, "Don't want no war" and most of what Phil Ochs wrote. By gosh, this guy could have been a protester at Century City.

You can read the entire Axios piece (part nine of a series on the post election Trump administration) here.

Forgetting Afghanistan for the moment, where real enemies to human rights will undoubtedly take over, the withdrawal from Germany is right out of a marriage between 1930s isolationism and 1960s anti-militarism. Cynics will attribute the German order to  Trump's relationship with Vladimir Putin, but I'm willing to give Trump his due, at least for the sake of argument.

The overall effect of Trump's Nov 9 orders, had they been obeyed, would have been to reduce American overseas influence substantially, and to undercut the idea of American military power as a diplomatic tool.

I must admit that there is something contradictory about these last-minute orders and Trump's incessant bragging that he had rebuilt the American military, but when the analysis requires a comparison of what he said (the bragging) vs. what he did (the order to withdraw all of the troops), the rational view, I would suggest, is to look at what was done rather than what was said.

I caught sight of the November 9 Trump order just a few days ago as another thought was running through my mind:

Wasn't the January 6, 2021 attack on the nation's capitol right out of the 1960s radical left playbook? It had all the elements of the original fantasy -- the people rise up out of (perceived) objections to government actions and march on the seat of government.

The difference between passivist idealism and violent radicalism is simply whether violence is contemplated. One side in the 1960s anti-war movement rallied in front of the pentagon (the famous scene of putting flowers in the barrels of rifles), published anti-war newspapers, and ultimately marched in the streets of your city. The other group built bombs, fired guns at city police stations, and conspired to create a revolution.

Isn't that violent revolution exactly what the January 6 rioters were trying to accomplish?

After all, they were acting with the intent of halting the lawful working of the elected government of the United States.

It couldn't have been more out of the pages of the Weather Underground or any of the other anti-war radicals of the 1960s. Only the language is different, and even that isn't all that different. In each case, there is the rejection of the idea that a republican form of government should be allowed to continue its functioning, at least if the elected representatives have come to a conclusion that some of us don't agree with.

In the earlier era, the radicals called their targets fascists or capitalists or enemies of the people. In the current day, the radicals call their enemies socialists or communists or Democrats, and just like their 1960s forebears, they think this is reason enough to use violence to get their way.

Both sides even wrapped their violence in some sort of patriotic flag, whether it was the Vietnamese National Liberation Front or the American flag, or even the Confederate battle flag. In the latest attack on the idea of democratic choice, the flags even included some ingeniously contrived Trump flags, as if he were equivalent to a whole school of thought. Donald Trump on the one side, Das Kapital on the other.

What is also comparable among those '60s radicals and the current anti-government element is their devotion to particular lines of thinking that have been established by a particular sort of literature. The radicals of the '60s developed (to at least some extent) out of the Marxist rebels of the era 1900-1940 or thereabouts. They described themselves as "red diaper babies," a term I didn't understand when I first read it, but which describes children raised by parents who themselves were members of the American Communist Party. One should understand that the Communist Party was more popular in an era when economic swings were more violent -- the Great Depression, for example -- than they have been in this post-Keynesian and post-WWII era. They studied Marx and Mao and seem to have based their views on an overall distaste for capitalism.

The modern day revolutionaries have their own equivalent of The Communist Manifesto, although much of it comes in the form of talk radio and faux news commentators. In either case, it involves tortured reasoning applied to historical references and undefended assumptions.

The 1960s radicals didn't really have a well-developed replacement for the system they loathed, but just like any other revolution, they figured they would solve that problem when they won. If you asked them about the Soviet Union as a model, they simply waved it away as "not real socialism" and went onto other topics.

It seems to be similar with the current round of radicals, even if they come from the right rather than the left. What both sides have in common is their common distaste for what the common people (ie: you and me) have decided. The current revolutionaries reject the legitimacy of the 2020 elections, just as their 1960s mirror-images rejected their own. The ostensible reasons for rejecting election outcomes are a little different -- "people are misled by the capitalist war machine" is the excuse from one era, vs. "the election was stolen by the Democrats" in this era.

In both cases, it was and remains a rejection of democracy. The current day Republicans can't seem to accept the fact that they lost an election because the people of the U.S. were fed up with Trump's tweets. The '60s radicals couldn't accept the virtues of free elections or even of free speech.

They really are mirror images.

And in both cases, the followers looked to leaders who were terribly flawed and ultimately evil.