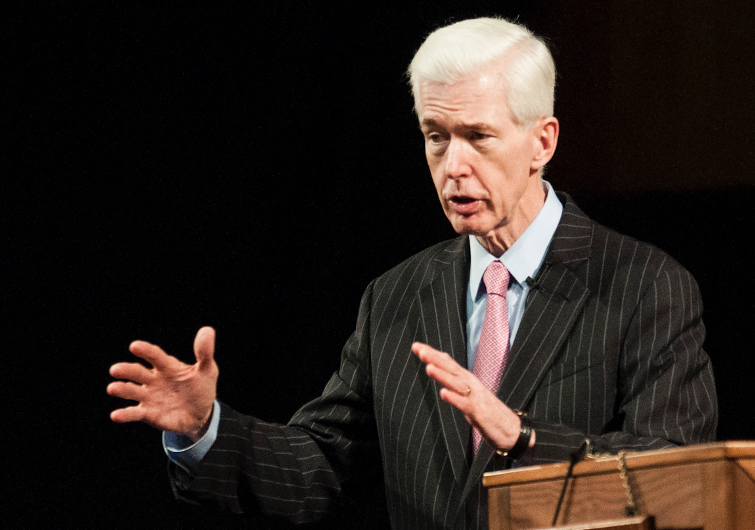 GELFAND’S WORLD--A memory: Walking out of a restaurant in the early evening of October 7, 2003, I noticed a long line of people on the other side of the street.

I said to myself, "that's a lot of people to be waiting to get into a high school dance recital at Alva's." But after another moment it occurred to me that they weren't lining up for a cultural event but to get into the polls. And an instant later it came to me that Gray Davis was about to take it in a particularly painful way. These people were out for blood that night. (Photo above: Former California Governor Gray Davis.)

Of course they had reasons, or believed that they had reasons. We had had the rolling blackouts and an increase in the automotive license tax. Gray Davis was blamed for not being straight with the public about the deficit the state was running, or what it would take to get out of it. The recall was successful (according to historians, it was the second time an American governor had been recalled) and it's been a page in the Republican playbook ever since.

A hoped-for repeat of that act is what motivated Republicans and monied interests over the past months as they collected signatures to recall Governor Gavin Newsom. I haven't noticed a big increase in my license fee and the juice stays on, but the Republican money sees a chance to overturn a clear election result if only they can convince enough Californians that the pandemic was Newsom's fault.

Oh yeah, he also went to dinner. At an expensive French restaurant. The fact that the Republicans were the group who opposed all those lockdowns and closures (and presumably the right of restaurants to stay open) doesn't seem to embarrass them much. One arrow in your quiver is as good as any other, I guess.

I listened to a few minutes of Caitlyn Jenner being interviewed for the recall election, and I think I can distill the message: Gavin Newsom is to blame for all the bad things that have befallen the state of California both before and during the pandemic. Jenner also talked about how bad Newsom has been for business and that businesses leave California.

The fact that California continues to hold its rank as the fifth largest economy in the world goes unnoticed in Republican eyes. We're higher than India, France, Italy, the U.K., and Russia, although we're behind Germany.

But the recall made the ballot. Let's pause for a moment and take note of what a small thing this was. It required less than 1.5 million signatures of registered voters in a state the size of California. In ordinary years, the opposition party wouldn't have bothered, but Republicans long since lost their hold on either house in the state legislature, so they can't hold budget bills to ransom the way they used to. They are stuck blaming the Democrats for every manner of misfortune, including whatever crime we have in the cities and how many businesses move their corporate headquarters to lower tax states.

So, the recall is on, and it's once again a chance for people to get in touch with their inner narcissist.

There's Grizzly Adams, excuse me, Grizzly Cox, as in John Cox. He's the guy who has been getting on TV sporting a live bear, claimed by the news media to be a thousand pound Grizzly. This is all part of some advertising agent's vision for calling Gavin Newsom "Beauty" so John Cox can be "The Beast." I guess that calling Gavin "beauty" is to play the old Republican game of claiming that your Democratic opponent is effeminate, or a commie, or educated. But it's going to be hard for Cox to convince people that he's a beast.

Ah, John Cox. Here's a guy who had already lost three elections by 2004, and that's just in his native state of Illinois. Then (presumably to show how hard-headed and realistic he could be) he ran for president in the 2008 primaries. He didn't do very well. To give you an idea, he finished 16th in the New Hampshire primary, taking 39 votes, which meant that he finished narrowly behind Vermin Supreme, Vern Wuensche, and Albert Howard, who received 41, 44, and 44 votes respectively. I didn't make those names up. Even in a small state like New Hampshire, it took a little over 75,000 votes to finish in second place, and a little over 88,000 to finish on top (John McCain).

Of course the Iowa Caucuses precede the New Hampshire Primary. Cox also finished out of the running in Iowa, although history explains that he had officially dropped out of the race prior to the caucuses, which means that he wasn't doing much campaigning in New Hampshire either, at least in the weeks leading up to the elections.

But John Cox has lots of money, and he apparently likes to spend it on running for offices and even one time on a California ballot initiative. Oh, that's right -- after a lifetime of being an Illini, he became a part-time California resident in 2007 and a full time resident of Rancho Santa Fe in 2011. So, we can be reasonably confident that by the time the recall election takes place sometime this fall, John Cox will have been a Californian for at least 10 years. Of course there are kids on bicycles riding up and down my street who have been California residents for more than 10 years, but they don't have the Cox bank balance.

As I described in an article from a couple of years ago, John Cox has an imagination which he has applied to the question of how to make government work better. Unfortunately for him, the result of that imagination was a ballot initiative that is susceptible to parody and sarcasm. You can already imagine the ads: "John Cox actually makes more sense than Caitlyn Jenner, but he's the guy who wanted to enlarge our state legislature to more than ten thousand members. We're not kidding."

And if I were running the Newsom campaign and had a sense of humor, I might show the grizzly bear that Cox is carting around and visually morph it into a bull. And then gradually rotate the bull so all you can see is its hind end.

This recall election is going to be deja vu all over again because the 2003 recall also had a clown car full of candidates. And gosh darn, there were a lot of them. It took page after page in the voters' handbook just to list them. On the day of the election, there were a hundred and thirty-five on the ballot. There were another 20 or so who got write-in votes.

Finally, one word of caution for the Democrats and a ray of hope for the Republicans. As Yogi Berra said, "it ain't over till it's over."