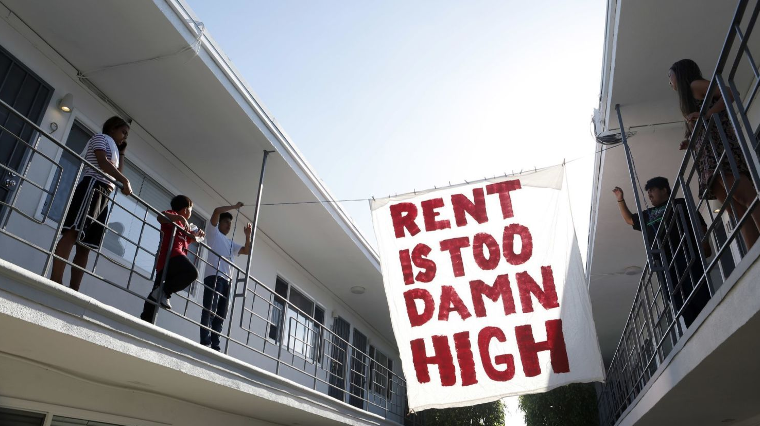 AFFORDABLE HOUSING-Housing Is A Human Right has compared market-rate rent prices to what residents are earning in several California cities and the findings aren’t surprising: the rent is still too damn high.

Housing Is A Human Right examined market-rate rents for the metros areas of Los Angeles, San Francisco, San Diego, and Oakland. We used data from the U.S. Census Bureau and the U.S. Department of Housing and Urban Development, comparing rent prices to per capita income in each locality. The results show that Californians continue to be rent burdened, drowning in sky-high rents charged by corporate landlords, major real estate companies, and predatory landlords.

Experts have long considered that anyone spending more than 30 percent of his or her income on rent is “rent burdened,” which impacts one’s ability to save money and pay for medical treatment, food, and other important needs to live a healthy, productive life, such as a college education. While more than 180 billionaires live in California, the state is home to millions of middle- and working-class renters who desperately need politicians to step up and help.

In fact, widespread rent burdens throughout California pushed a broad coalition of housing justice groups, unions, social justice organizations, and political groups to seek the undoing of statewide rent control restrictions through Proposition 10, in 2018, and Proposition 21, in 2020, so localities could implement updated rent regulations. The real estate industry, including billionaires Stephen Schwarzman (photo above, right) and Sam Zell (photo above, left), spent $175.4 million to successfully stop both ballot measures.

In the meantime, rents keep spiraling out of control.

In the San Francisco metro area, a market-rate studio costs between $1,500 and $3,380 per month. For a one-bedroom, a landlord rakes in between $1,895 and $4,985. (Rents for two- and three-bedroom apartments range between $2,490 and $25,000.) In San Francisco County, which has been extensively gentrified by speculative developers, City Hall policies, and well-paid tech workers, annual per capita income is $68,883.

San Franciscans earning $68,883 won’t be rent burdened if they’re tenants of studio and one-bedroom apartments at the low end of rent price range, but even they can’t afford studio and one-bedroom units at the high end. Tenants making $50,000 annually will be totally out of luck: with a monthly income of $4,166, an individual will shell out 36 percent of his or her paycheck for a $1,500 studio and 45 percent for a $1,895 one-bedroom.

It should be remembered that due to a California state law known as “Costa-Hawkins,” landlords can raise rents for rent-controlled apartments to market rate once a tenant moves out. It’s why housing justice activists want to end or reform “vacancy decontrol,” which allows landlords to dramatically jack up prices for rent-controlled units.

Oakland has also been slammed by gentrification: people with good incomes moved out of expensive San Francisco and into Oakland and other cities in the East Bay.

With a monthly income of $3,599, individuals deliver 50 percent of his or her paycheck to a landlord for a market-rate studio that costs $1,804 and 66 percent for a $2,382 one-bedroom apartment.

It’s staggering money — and landlords are hauling in big bucks.

Yet state and local politicians keep pushing for the construction of more expensive, market-rate apartments for a housing affordability crisis through a deceptive trickle-down housing agenda, which enriches real estate executives who are major campaign contributors. That’s never going to help middle- and working-class residents who are suffering right now.

A multi-pronged strategy that regulates rents, preserves affordable housing stock (which includes rent-controlled apartments), and produces more affordable housing first and foremost is the only way to go. But will politicians do what’s right for middle- and working-class Californians? Or will they keep doing the bidding of Big Real Estate billionaires?

(Patrick Range McDonald is the award-winning advocacy journalist for Housing Is A Human Right and a CityWatch contributor.) Prepped for CityWatch by Linda Abrams.