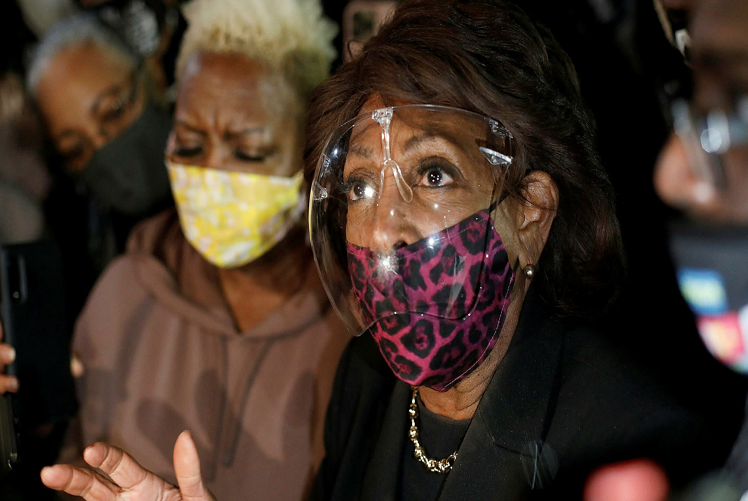 For those who have ever met her, and for those in her district, she is a charming, very responsive politician who spends more time and energy in her district than in Washington, and she makes darned sure that her constituents' needs get heard (and met, if at all possible--as with the issues surround LAX expansion).

However, publicly, she's been horribly divisive to the nation, all while screaming and leading hordes of angry mobs (all of whom I'm sure are thinking they're justified, peaceful protestors fighting for a glorious civil rights movement) who have more than a few times crossed the line with respect to intimidating peaceful Americans minding their own business (and Americans who are NOT racist).

Rep. Waters' famous cry of  "No Justice, No Peace!" might be legal free speech, or it might be the equivalent of screaming, "Fire!" in a crowded theater.

And if an angry crowd is right-winged or left-winged in its make-up, the threat to public safety and the discord it creates in a nation still dedicated to the peaceful protests of the late Rev. Martin Luther King, Jr. is one that will inevitably turn off many, if not most, Americans.

By the way, for those of you who clicked on this article thinking I'm a fan of Mr. Derek Chauvin, please think again and either reconsider or just exit this article and move on with your lives.

Because whether the late George Floyd had a criminal past, and/or he was hyped up on a lot of medications, Derek Chauvin (or any other reasonable police officer) knew damned well that Floyd was DOWN and a threat to NO ONE after 1-2 minutes of being under control.

Whether or not Chauvin intentionally killed Floyd is up for debate, but Chauvin's contributing to a likely fatal outcome for Mr. Floyd is undeniable. Chauvin's job was NOT to take out a perp who is of no immediate threat to anyone, as is known by every properly trained and morally appropriate law enforcement professional.

There's a reason or three why most everyone in the nation, including the late conservative commentator Rush Limbaugh and former President Trump, decried the event and/or tried to take action. Some of us remember Sen. Tim Scott's and President Trump's efforts to create a national database of misbehaving officers, and some of us don't...but it happened.

Because the most ardent of law-enforcement Americans must acknowledge that the blowback against law enforcement throughout the nation was inexcusable and undeniable after Chauvin's publicly-filmed actions.

And so along comes a much-awaited trial for Mr. Chauvin...and Rep. Waters THEN decided to tell protestors and journalists in Brooklyn Center, Minn. that "we've got to get more confrontational", despite later telling critics she is "nonviolent".

Yet it's not civil rights attorney Alan Dershowitz alone who compared tactics of Rep. Waters to the Ku Klux Klan.

And for those who are offended by Dershowitz's statements, I'm guessing you might not agree with those who felt that most of those conservative protestors who did no violent acts are "very fine people"...because they didn't each and all DO anything violent personally, right?

For those who are OK with double standards, a partisan and divided House voted down a resolution condemning Waters' remarks 216-210 entirely on a party line vote.

In contrast, anyone remember the vote on Rep. King for HIS horrible remarks?

And even CNN, that "uber-conservative media source" reported that the judge in Chauvin's trial (Peter Cahill) made it clear that Waters' statements is a likely grounds for appeal with respect to jury intimidation.

Because clearly the threats of what might happen to a jury who declared Chauvin innocent (such as the charges being too heavy-handed, for example) are undeniable...and uncertain as to why the jury voted the way they did.

We all WANT to think the jury honestly declared their intentions of "guilty" from the heart, but we can't really KNOW, can we, after Waters' remarks?

And, of course, not be outdone, President Biden talked about the "right" verdict BEFORE the verdict was announced. NOT OK for a President of the United States to weigh in on a local judicial issue!

So now Chauvin has a first-rate appeal that can be pursued by his legal team.

And hence the closure of a nation at witnessing the inexcusable actions of a bad, corrupt, and bullying police officer is likely NOT going to happen.

The more we SEE, either from those who filmed Chauvin leaning on Floyd's neck for a ridiculous and inexplicably long period of time, or from a bodycam of a Columbus cop's who killed a dangerous 16-year black teenager trying to stab another person, the better.

But the less we HEAR from Rep. Waters, who is now Derek Chauvin's new best friend, the better as well.