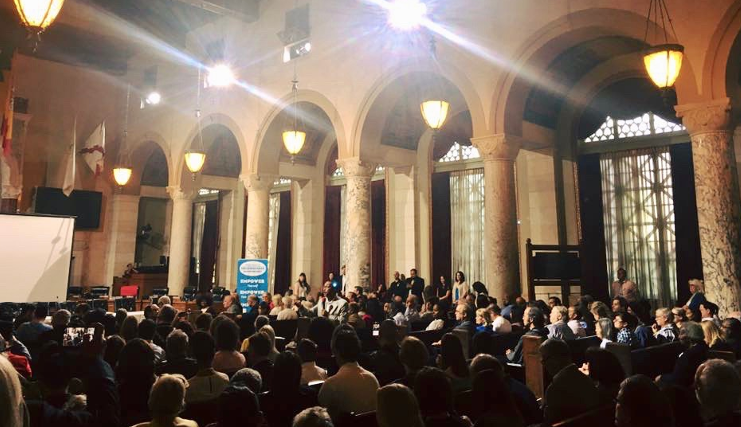 GELFAND’S WORLD--One day a year, the nearly 2000 neighborhood council activists in LA have a chance to come together under the same roof and share their war stories.

At least it has been that way for most of the past twenty years. But this year, things may be grinding to a halt, not due to the pandemic, but due to personalities. The strange part of the story is that highly paid city staffers and the chair of the Board of Neighborhood Commissioners have intervened in their own fumbling way, but have been incapable of bringing the issue to a settlement.

A little background to the story: For about the first decade of the neighborhood council experiment (early 2000s), the city agency known as the Department of Neighborhood Empowerment (DONE) organized, staffed, and funded the annual congress. But just under a decade ago, DONE announced that it would no longer do that job. Faced with the loss, the neighborhood councils volunteered to do the congress ourselves, and Cindy Cleghorn from the Sunland-Tujunga Neighborhood Council took the lead in chairing and overseeing the congresses. She has carried out these tasks ever since.

There is one chronic problem that led inexorably to the current standoff. The congress planning group that creates the congresses started and continued to evolve essentially as an ad hoc group which had no official standing within the city. It was just anybody and everybody who was interested in participating. In any given year, there might be twenty or thirty people actively engaged in the process. There were no official rules or bylaws, just a developing set of traditions and a working process that -- as best I can describe it -- was to try to achieve consensus.

But this of course led to problems. In recent years there has been the desire among some of the planning group to build a different kind of congress, or at the least to expand the scope of the workshops and breakout sessions to be presented. I have been one of those people, along with at least a dozen others that I know from the planning meetings. Bluntly, a few of us have been arguing that congress participants should be given a chance to discuss the corruption in the City Council which led to multiple felony indictments, the behavior of DONE towards our councils, and chronic overreach by the BONC. In other words, we should treat our participants as adults, and allow the discussion of controversial topics.

But the way the planning meetings were run created a lot of friction in the attempt to make the desired changes. Some of the planners decided to find a new chair who would be closer to their vision. The complication came from the fact that (as mentioned above) there are no official rules for how to make such changes in the management of the committee. It's really weird, because in ordinary non-Covid years, this group has overseen the expenditure of $40,000 of public funds. City oversight sort of fell through the cracks on this one, although DONE has at least sent a staff member to attend most of the meetings.

Early this year, it hit the fan.

In January, the planning group met and, over the objection of the chair, passed a set of guidelines that effectively should function as bylaws. The guidelines call for an election that would fill defined officer positions including the chair. Cindy Cleghorn refuses to go along with those rules.

In the February meeting, in full view of the General Manager of DONE, and perhaps 50 other participants, the meeting reached a  point in the agenda where we would have gone on to an election. At that point, Cleghorn abruptly declared the meeting adjourned. I should point out parenthetically that under Roberts Rules, no one person has the authority to unilaterally declare a meeting adjourned -- as in everything else, that decision belongs to the body as a whole.

But the "adjournment" was so surprising, and because people (such as myself) who would have objected had been muted by the moderator, a lot of participants believed that the meeting was over and just clicked off.

So, there was no election at the abortive February meeting.

Still, a large number of people did remain and under the tutelage of GM Beltran, we were allowed to speak. One argument made by myself and others was that Cleghorn had no particular official status in the group at that point, since we had not had anything even resembling an election for well over a year, whereas we do have our newly adopted rules that call for the election.

The following month, Cleghorn and a couple of her colleagues created an agenda and held a meeting. As a participant in that meeting, I made 3 attempts to comment on the proceedings, and each time, after one sentence,  I was cut off (muted in the parlance of this Zoom universe) and not allowed to speak. This was of course a gross violation of any kind of parliamentary procedure you can name -- the congress planning group has officially adopted Roberts Rules -- but those in control defended their actions by claiming that the congress planning group has never operated under Roberts Rules.

And then things got even more bizarre. It was claimed by her supporters that the congress essentially belongs to Cleghorn, that it does not need to use Roberts Rules, and it was even suggested that the congress planning group was not really a city entity.

The current standoff continues. Cleghorn claims that she is the chair and continues to call meetings that do not include officer elections. She has in fact sent out an announcement for a Saturday, April 3 meeting. The announcement even includes what appears to be a draft schedule for a September congress, even though no such thing has been agreed to by the programming committee.

At this point, more than a dozen congress planning participants are calling on DONE to step in and hold an election and, absent that, to freeze all funds to any proposed congress that is not operating under open elections. The first letter sent to DONE and other officials was signed by 9 planning group participants, myself included.

At this point in the story, this article should be complete, and the editor grateful for a modest word count. But there is more . . .

The BONC is now involved, albeit clumsily.

Background: Under the system created by the city Charter, there is a 7 member authority known as the Board of Neighborhood Commissioners (BONC). They are appointed by the mayor with the assent of the City Council. Legally, the BONC has the power to set overall policy within the neighborhood council system, but sometimes BONC commissioners try to take an active role in neighborhood council activities. In this case, we have the president of the BONC, Eli Lipmen, becoming involved.

Over the past couple of weeks, the DONE General Manager and Eli Lipmen have been trying to get Cindy Cleghorn to meet with representatives of the opposition, led by Daniel Perez. Perez is the person who has volunteered to run for the chair of the congress planning group and would presumably face off against Cleghorn if an election were to be arranged.

Somehow, Cleghorn was persuaded to meet with Perez and a small number of his associates. The meeting was to be facilitated by Raquel Beltran (the DONE GM) and convened by Eli Lipmen. The offensive part of this plan was that the meeting would be closed to all people other than DONE staffers, Lipmen, Daniel Perez and two of his associates, and an equal number for Cindy Cleghorn.

I asked Beltran and Lipmen directly for entrance into the proposed meeting. I argued that there were interests that would not be represented if the meeting were so limited, and that somebody should be allowed to report on what went down in the pages of CityWatch. Beltran politely refused.

Wow. So much for twenty years of pious rhetoric about transparency and bringing government closer to the people. When they want to close ranks and close the doors, they do it. CityWatch and I were excluded from the closed meeting.

On the morning of the meeting (Tuesday of this week), Cleghorn actually brought five people including herself, in seeming contradiction to an agreement to have a small gathering.

It is reliably reported that Lipmen asked people to keep things within the group, or words to that effect. In essence, people were being asked to engage in a discussion which would remain unreported. I am going to go out on the limb here and speculate that Lipmen was hoping to talk Cleghorn into consenting to holding an election that would be run by DONE. If I understand correctly, Beltran proposed that option directly, and that the Saturday, April 3 meeting would in fact be that election meeting.

Cleghorn refused outright. She explained that the agenda for Saturday's meeting was already prepared, and it does not include an election. Seventy minutes or so into the discussion, the meeting ended abruptly, apparently due to some technical snafu.

So there we are -- stuck in a limbo as long as the GM and Lipmen allow Cleghorn the luxury of pretending she is the legitimate chair. It's absurd on the face of it. Meanwhile, as mentioned above, Cleghorn sent out a meeting announcement for Saturday, and in response, Beltran has requested that Cleghorn cancel her meeting or join in a meeting to be hosted by DONE.

One editorial remark, which seems obvious to me but has apparently been missed by some of my colleagues. The idea that Lipmen and DONE would hold a closed meeting with the intent of controlling events which affect close to a thousand potential participants is outrageous. The fact that they were asked about their meeting plans and were asked to allow public access -- but refused outright -- is equally outrageous.

The neighborhood council system was invented to get away from closed door government, just as the Ralph M. Brown Act was enacted at the statewide level. The public business is supposed to be carried out in public. The closed meeting was not justifiable as an exercise in pursuit of better government. It may have been created with the beneficial intent of preserving somebody's sensitive feelings, but that isn't good enough.

Why is any of this of any interest to you, the reader? When the pandemic is past, the city will go back to holding in-person congresses. Over the past several years (except for 2020, the year of the virus), these one day congress meetings have been costing upwards of $40,000 each, and it is all taxpayer money coming from neighborhood council appropriations and a few bucks donated from other city government sources. Beltran has said that DONE will not release funds to a congress planning group absent an election. Meanwhile, we are waiting on how the dueling parties will reply to each other, while you and I -- the public -- are excluded from the deliberations. Mayor Eric Garcetti is busy with bigger problems, but at least someone on his immediate staff should look into this mess.

One more point, along with my apologies for going on so long: Eli Lipmen suggested at one point in the meeting that perhaps this year's congress should be cancelled. That's one way to deal with the failure to assert leadership over the clear misuse of a public resource. Had the closed meeting been held in public, and in view of the mayor's representatives, I suspect that this proposal would have received a quick and clear cut negative response. That's the problem when you let 13 people hold a closed meeting to decide the fate of an institution that affects (literally) close to a thousand people.

And no, this is not an April Fools Day joke, even though it reads like one.