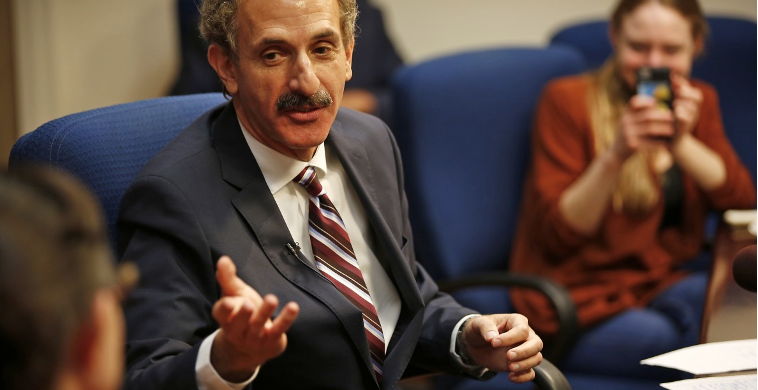 THE CITY--Spring is in the air, and though the Antelope Valley Poppies were a disappointment this year, the local finger pointers are certainly popping in Los Angeles!

At Center court, the County of Los Angeles is telling Federal Judge Carter that it has 11 departments including LAHSA helping people experience homelessness. The pathetic City of Los Angeles, it contends is simply “unable to fully enforce its anti-vagrancy laws" which is causing encampments on the streets.

The City Attorney Mike Feuer, who is running for Mayor while batting away scandals as fast as he is exposing price gouging in the secondary mattress market, says leave it to the electeds!

For some reason Mike Bonin, the CD11 council member, who really should have been an angling lawyer not a podcast host, wants a judicial consent decree.

The county's lawyers authoritatively assert that the horrible crisis over which they are all being sued should be handled by the county’s elected governing body, the mighty Board of Supervisors.

Ordinance idea:  Let's make it a misdemeanor for a City Attorney running for Mayor to hock himself on twitter constantly while on the clock!

The mood was slightly less bad at the Metropolitan Transportation Authority board of directors meeting on March 25, as a load of federal funding had been approved that would provide for some restoration of the badly decimated bus and train service. Yay.

Our dream of having the public toilet unlocked at the Metro Redline station may finally become a reality.

Pre-pandemic, Metro was averaging 1.2 million boarding’s a day throughout the system. Now, according to staff there are closer to 550,000 boarding’s. As transit services effect the people who need it most, it's a top priority to get things moving.

Tucked in among the Consent Calendar Items, during a meeting that was "plagued by live stream technical difficulties" was an old ditty originally conceived by raconteur and former metro enthusiast, Mark Ridley-Thomas [MRT].

Item number 17, for which comments would not be taken on the Exclusive Negotiation and Planning agreement [ENA] with WIP-A, LLC, a wholly-owned subsidiary of Watt Companies, Inc. and the County of Los Angeles.

The project, a joint development of 1.77 acres of Metro-owned property and 1.66 acres of County-owned property at the Expo/Crenshaw Station in partnership with West Angeles Community Development Corporation [CDC], first came to the public's attention on January 9, 2018 at the Kenn Hahn Hall of Administration.

The concept of getting in business with a for profit developer to produce 492 residential units on public land appealed, but the question as to whether 15% of the units being restricted for affordable housing was enough came up. Frankly, it seemed to low!

The 47,500 square feet of commercial + retail space with a grocery store and locally-owned and operated restaurants sounded fine, but how would regular people be able to afford to live there?

While glancing around to locate the appropriate staff to answer the question, there among the glitterati, schmoozing like a professional lobbyist at a county meeting was Richard Bruckner, none other than the former Director of Regional Planning and trusted sidekick to MRT.

Bruckner was your man if you wanted to house 57,000 people in a remote high fire risk area in the Antelope Valley to generate a $31 million in annual public revenue surplus for the county or approve an 80 ft. high automated dry stack boat storage facility which will extend 11,600 square ft. over the water.   But he was also available for *Special MRT projects*.

Nobody can "get to yes!" like old Bruckner, except Michael LoGrande.  [See painful afterword.]

Watching Bruckner bob and weave and introduce a procession of county phat cats including Sachi Hamai and Mark Ridley-Thomas to Jennifer McElyea of Watt Companies, one had to wonder, does Bruckner even know how the lobbying rule following county service works?

Evidently, not. Richard Bruckner had exited county service in July 2017 and here he was with client Watt Companies Inc. on January 9, 2018

Whenever, a serious legal question arises we bring it first to Sheila Kuehl who attended Harvard Law School and has genuine contempt for the public, "The First Amendment requires that you be able to speak" she says, "not that we are forced to listen."   Lovely.

On January 9, on the record questions about the revolving door ordinance were raised and immediately assigned to County Counsel Mary C. Wickham who has since moved on to become a Superior Court Commissioner, who handed it forthwith to Nicole Davis Tinkham, who jotted a quick note before leapfrogging to become the highly irregular interim Public Defender:

Mr. Preven, The information provided to you by Mr. Garcia should answer the question you posed below. For the future, please submit all of your public record request for County Counsel to [email protected].

Have a nice day!

Bruckner, who was already working at Mayer Brown with the client Watt Companies, was evidently in violation of the ordinance.

Alan Yochelson the Head Deputy of the Office of the District Attorney's public integrity division was convinced that the misdemeanor was Mike Feuer's responsibility to enforce. Yochelson, who recently handed things over to the similarly competent, Sean Hassett... went full finger!

But Mary Clare Molidor of the Los Angeles City Attorney’s Office was having none of it and felt it was the DA's job because it was a county ordinance. Mary ought to know--she retired after 42 years this month. I know folks call her "MC," but Feuer's been calling her Mary Clare for 25 years and he claims he will never stop.

Despite plenty of affection for both Brucker and MRT, it was clear that a finding had to be made, and Bruckner needed to be separated from the project until a date certain (July 2018) that reflected at least the required year from his glamorous exit.

Sure he was good at streamlining systems and thinking through good planning and zoning, but he broke the rule so should pay the $5000 fine and the entire Executive Office should be required to take an Ethics refresher class during a televised county board meeting!

Finally, Mr. Ridley-Thomas, who should know better, should hang his head in shame.

When the public first caught wind--no pun intended--of Mark Ridley-Thomas's capacity to put Bruckner into service, it was during his son Sebastian's first campaign for Assembly district 54. Pre-scandal.

MRT had decided that it would be highly impactful to have a letter arrive at constituents' doors confirming what Sebastian had said about Fracking. The "Draft Ltr re Fracking" it was decided would come from Richard Bruckner, the Director of Regional Planning.

Though it was clearly inappropriate to be deploying public actors into a private Sebastian Ridley-Thomas election moment, that's exactly what happened.

It's a county classic, in which an email chain obtained through the public records act surrounding the Baldwin Hills Community Standards District and the Community Advisory Panel revealed how under MRT"s initiative, a clever but not necessarily ethical or legal use of public resources was deployed.

Richard Bruckner to Karly Katona: "I am on 8th floor if I get a break I will stop in."

The Los Angeles Times swore they were doing the story on the CPRA and what it revealed.  Paul Pringle, himself, the éminence grise of MRT attacks, finally wrote to me in May 2015, "The story will soon see the light of day. "

Consider a few snippets from that trove of emails to get a flavor:

" I know MRT would appreciate it if we could get this out asap."

"Thank you. Can we make it addressed to Neighbor not Resident? Also, the Supervisor liked the post-it that was on the version yesterday. Can that be added? Karly"

"FYI, we found a vendor for the Baldwin Hills mailing who will meet the Monday deadline, cost $20,000 for black and white. The cost for col or was $25,000, but wouldn't be able to meet deadline. Order has been submitted. Thank you for your support."

"How should I code this task on my time sheet? As 3011, or something  else? Thank you. Chris"

11/26 FW Baldwin Hills - mailing info  "Is there a specific account to charge this too? The mailing for Baldwin Hills? It's okay if there is not. But just curious. Nick"

But somehow the man who could put such an impressive almost Scott Walker-level county malfeasance scheme into effect, was equally capable of sinking the story at the Times.

Michael LoGrande, the former planning director at City of Los Angeles, so the equivalent of Richard Bruckner, was fined $281,250 by the Ethics Commission in the summer of 2019 for illegally lobbying within one year of leaving city employment.

The mayor told the Times, “He was an expert, I thought, in helping us be able to continue streamlining systems and think through good planning and zoning.”

Turns out he was an expert at influencing planning department decisions on behalf of clients.

Just like Bruckner. Alex Comisar said “The mayor is grateful to the whistle blower who brought this matter to light,”

Funny, how in one case the largest penalty levied against a current or former city employee, and the other...

(Eric Preven is a Los Angeles activist and CityWatch contributor.)