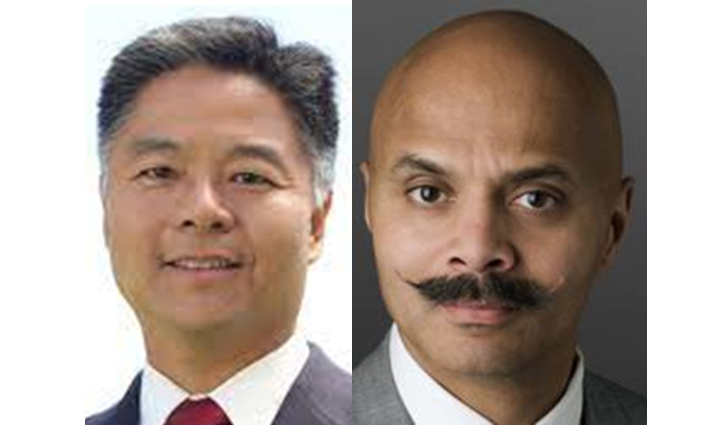 LEANING RIGHT--Something very bad just happened by a great man who could have, and should have, done much better addressing the ills of our nation.

1) I once knew a brave, young leader, an immigrant who arrived in the U.S. at age three, and formerly an outstanding JAG officer, and who was hand-picked by the late Mike Gordon of Torrance as his political successor. Mike Gordon, who died of brain cancer at the age of 46, could have been the greatest and most uniting bipartisan Democratic leader and likely Governor of California.

That successor from Torrance was and is House Rep. Ted Lieu.

2) I once knew a brave, young leader who ran up and down the halls of Sacramento with the late LA Councilmember Bill Rosendahl trying to get the state to throw money at a much-needed LAX/Metro Rail connection, and who envisioned better transportation throughout the South Bay, the Westside, and all of California. Bill Rosendahl was a selfless, loving man who made it a point to "embrace" both Republicans and Democrats.

That brave leader who represented the South Bay and Westside was and is House Rep. Ted Lieu.

I remember calling their transportation efforts in Sacramento "Bill and Ted's Excellent Adventure".

3) I once knew a visionary and brave, young leader who was way ahead of the learning curve with respect to skin cancer and the need to prohibit tanning beds to those under the age of 18 from irradiating themselves and causing skin cancer. He became one the most respected legislators by myself and other dermatologists throughout America.

That health advocate was and is House Rep. Ted Lieu.

4) I once knew a brave, young leader who fought hard against what he felt was bullying by President Trump, and although he had his own theatrics and perceived bullying by his political opponents, probably felt he was fighting former President Trump against fire with his own fire.

That brave leader who succeeded Henry Waxman as a House Representative was and is House Rep. Ted Lieu. A few key points here:

1) Both Mike Gordon and Bill Rosendahl were white men. The tanning salon issue predominantly affected white men and women. Ted Lieu fought for the rights of minorities and LGBTQ Americans, and still does with vigor, confidence, and conviction.

2) Who I now don't know is the Ted Lieu screaming at a black man, one attorney by the name of Peter Kirsanow who is part of a lawsuit opposing discrimination against Asians at Harvard and other universities.

3) Who I now don't know is the Ted Lieu presuming that white males, who in the past have been in the majority of those in the running for positions in the judiciary, and who were appointed to the judiciary by both Democrats and Republican polticians alike, were so appointed based on race and gender ...

... and who was screaming at the aforementioned and stunned black attorney during a House Judiciary Committee meeting for the sin of defending Asian Americans, pure and simple.

4) I suspect that many Americans, including many of past and present Rep. Lieu's constituents like myself, don't really know Rep. Ted Lieu like they once thought they did.

So, who the hell am I to raise this issue about race obsession and a New Racism from the Left, and in particular from the Democratic Party whose history of racism against black, Jewish, and Asian Americans is as awful as anything we've learned in our U.S. History courses?

And, to boot, who the hell am I to raise this issue as I observe many of the loudest individuals decrying racism (and many in Congress) who are proving to be the most racially divisive in our nation?

1) I'm a guy who was one the loudest volunteer citizens who made sure that an Expo Line extended to the beach, and would bring traditionally black, brown, Asian, and white Angelenos and other Westsiders together. And I assure you that my financial and other volunteer resources and efforts were rewarded by actions and revenge taken against me and my family. We all paid the price!

Then-California Assemblymember and then-State Senator Ted Lieu was one of my strongest allies, bar none.

2) I'm a guy who at age twelve was terrorized and then got savagely assulted by four Latino youths who tried to steal my bike, and who probably had his life saved by my brother giving them his watch when he saw a steel knife in the back pockets of one of those four...and who, when I asked why they were doing this (before the physical assault began) was told "we don't like whiteys".

3) I'm one who graduated from UC San Diego in three years (1985) and was told I couldn't get into a California medical school because I was a white male...when the stats showed that a black female got into UC San Francisco medical school with a full grade point average and ten points lower on the MCAT lower than I had.

4) I'm one who joined the efforts to recruit Latino and black youths to medical school and other medical professions when I was in medical school at the University of Texas at Galveston.

5) I'm one who never forgot a fellow fourth-year Asian American medical student who told me, during a Rheumatology rotation at the Long Beach VA Medical center, that "Asian males are the worst kind of animal to apply to medical school". This was in 1989.

6) I'm one who stayed post-call during my internship at the Medical College of Virginia (MCV) after a sleepless night until 3 p.m. the next day, and did so to make sure I could stay by the bedside of one of the sweetest patients I ever had.

He was a 70-year-old black man (his name I remember, but need not say for his family's privacy), and he died of liver cancer that I diagnosed after he was ignored for months languishing in the hospital, and I very much needed to hold the hands of his bereaved wife to tell her what a delightful patient and man he was.

7) I'm one who heard an elderly black man at MCV tell me, as I was administering an IV line in his arm, that there was once a time when white doctors didn't treat black patients...to which I replied to this man and his family, "Aren't you glad you lived long enough to see the world become a better place?"

8) I'm one who saw the awe and admiration my black patients had for those black doctors and medical students, and who still believes that a greater Latino and black representations among our professionals, police officers, firefighters, etc. is the best thing we can do to unite our nation...

...but as a meritocracy to ensure our credibility would go well beyond race.

9) I'm one who taught ethnic dermatology to my predominantly white and Asian dermatology residents at the University of California at Irvine 20 years ago after working in Southern California clinics and serving predominantly black patients. This was well before the medical profession realized they needed to address and prioritize the health needs of all ethnicities in our nation.

10) I'm one who has enjoyed most of the greatest years of my career working predominantly under the leadership of black physicians who were and are some of the finest people in the world...not because they were black, but because they were great and awesome human beings.

So, in short, and in all sincerity, there are a lot of us all over the political spectrum who have fought in our own ways for racial and other minority justice and inclusion.

And in short, and in all sincerity, Rep. Lieu, you can do better. You can be a class act...I've seen you do just that for years. Let OTHERS do the bullying and quasi-racism that is destroying our nation from within...but NOT YOU.

And let anyone and everyone reading this do better and try to understand "the other side"...because that "other side" probably has a point or three that we ignore at our collective peril.