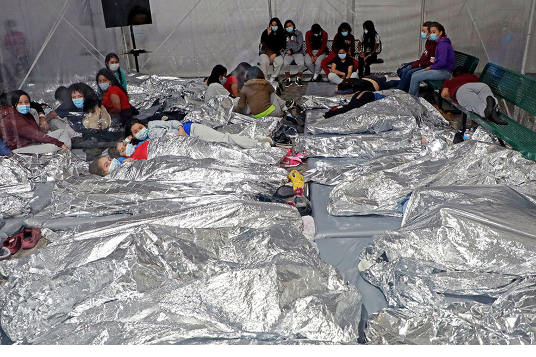 LEANING RIGHT--Contrary to the belief of many, no one single party has cornered the market on compassion to immigrants, including from nations so godawful that they have forced millions of migrants to illegally flee for their lives.

And YES, this is a public health crisis that every physician and medical profession has had to contend with in their daily jobs.

Although the Mideast and Africa are more Europe's problem than ours, the United States has played enough of a role so that it, too, must face the music and confront the Afghan and Iraqi citizens who it allied with in foreign conflicts over the last two decades (and many, by the way, are some of the bravest human beings on planet Earth!).

But it is the Western Hemisphere that geographically and politically impacts the United States of America. Although the Monroe Doctrine no longer applies to the Europeans butting out of Western Hemisphere conflicts (because WE sure as heck haven't butted out of Europe, Asia, and the Middle East!), the roiling conflicts of Central and South America affect US far more than Europe.

And let's face it: if Iran or China poke their noses into Western Hemisphere conflicts, don't most of us, regardless of political ideology, get particularly fired up and pissed off?

Flashback: I well remember my college days from 1982-1985 at the University of California, San Diego (Revelle College, for those of you who give a damn about that) when visiting Tijuana on the weekends (Revolución Boulevard, Tijuana Tilly's, Jai Alai and a whole lotta fun shopping) was fun and accessible.

Every American until the 1990's or so dreamed and presumed of going to Mexico as much as Canada. Foreign...but safe and accessible!

Enter the dreadful world of today: my Mexican- and American-born nurses and friends with relatives in Mexico can no longer safely visit their beloved families, particularly those living in the northern states of our southern neighbor...now so very close but so very far. Too damned dangerous, and too damned risky to show up in a car or wearing clothing that suggests you're from the U.S.

Ditto to our more southern neighbors--not so much Guatemala, but El Salvador, Honduras, Venezuela, and other regions. Good people live there, and people who deserve much better live there...but in large groups they are fleeing for their futures and lives. Most just want a future that is safe and is possible to succeed as much as any United States resident.

Particularly the "safe" part that is free of drug cartels and government officials who are anything but protective and supportive of their neighbors and fellow citizens.

Too many native-born Americans are going jobless, particularly with the current COVID-19 pandemic, and both hungry and without shelter, to allow those trying to live here illegally (and YES, there are laws--ask any LEGAL immigrant what Hell they've gone through to get here!) access.

Furthermore, the more we open the door, the more we encourage individuals (and especially children being placed in harm's way, and with illegal smuggling that have placed children in particularly dangerous situations of physical and sexual exploitation) to arrive here.

Like him or hate him, President Trump sharply reduced the flow of illegal/undocumented immigrants by beefing up the Border Patrol, ICE, and a slew of agreements with nations from Mexico to throughout Central America.

President Biden, in his quest to undo everything that his predecessor did, is so dogmatic in his efforts that he's thrown out the good he's inherited and CREATED A BORDER CRISIS. CNN (hardly a right-wing new source) reports how Biden's efforts have exploded and worsened a crisis that now far out shadows that which Trump inherited from President Obama.

Because while so many Americans feared that Trump's maskless policies were going to get them killed, they did NOT vote for Biden to transform and potentially bankrupt middle-class America.

There's no doubt that President Biden wants to be the next FDR or LBJ, as exemplified by his undisclosed, secret meeting with historians in the White House (but ripping apart the America that even Latino-Americans want to preserve will NOT endear him with either Democrats or Republicans...

...Except, of course, for the megapartisans or those so wealthy or in love with dirt-cheap labor and quasi-slavery work conditions that they're fine with the death of the American middle class.

1) Gallup news reports that 42 million want to migrate to the United States. Does anyone in their right minds think this is possible?

2) So, is former President Trump correct that President Biden is destroying our nation?

3) Did this crisis catch the Biden team off guard, as CNN questions or was this intentional to transform America into a one-party Democratic nation, just as more Latinos, Asians, and Black Americans leak into the GOP?

5) And how does anyone sympathizing with the plight of American citizens during the COVID-19 crisis feel about paying $86 million (and with an undoubtedly higher/increasing price tag) to secure hotels for those arriving from south of the border as Axios reports?.

Well, at least one Democratic mayor, Texas Mayor Bruno Lozano of Del Rio made it clear that President Biden has either let this crisis go or has outright created it.

And if anyone thinks that Vice-President Kamala Harris has the know-how or buy-in to fix the southern crisis (or whatever the hell the Biden Administration wants to call it), I've got a southern border wall to sell you, as ICE is being overwhelmed, told to stand down, and now releasing non-American citizens as much if not more as they did under President Obama.

It's to be understood that President Trump lost what should have been a handy re-election because of the underestimation and mishandling of the COVID-19 virus--this was the overwhelming issue that decided what happened last November.

And maybe President Biden thinks that this self-made crisis (it's a crisis, dammit, because the American People aren't idiots!) is so early in his term that this will be solved and forgotten by the 2022 election mid-term elections.

But it's pretty naive and silly to think that Americans will be able to absorb a huge hunk of the Central American population...

...and it's pretty naive and silly to think that this won't put a bitter, bitter taste into Americans' mouths, including and especially those who voted for President Biden to handle our nation's leadership and political and economic policies in a mature, professional manner.

Because helping our southern neighbors, so very important and needed, will NOT occur by absorbing more individuals than our nation's resources can possibly handle.