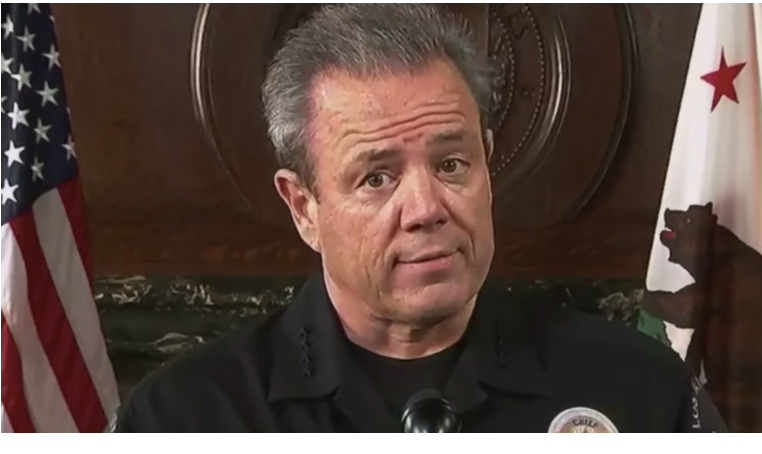 INSIDE THE LAPD--The lawsuit caused by Robert Cain, an LAPD officer who had been grooming and abusing a teenage Cadet was settled by the city for just under $2 million of taxpayer funds to the family of Jane MBQ.

Cain had previously been convicted and was sentenced to two years out of a possible eight, so a relatively light sentence.

You may recall stuntman and former Chief of LAPD Charlie Beck boldly hand cuffing Cain himself.

The narrative of the son of a former LAPD officer who worked in the Van Nuys and 77th Street divisions for ten years, before his arrest, grooming a cadet in the quasi-kindergarten of learning to be an LAPD officer is appalling and intolerable!

But only egregious malpractice as a policing organization could have resulted in activity that would cause Michel Moore to do his best version of Charlie Beck and shake his head in disgust.

The Mayor and LAPD have been running a retaliation, harassment and discrimination mill for years. The City reportedly spent $40 million dollars between 2007 and 2017 settling 18 Sexual Harassment cases and the story has not gotten rosier if one glances in the Mayor's closet.  [A CPRA request for an update on cases since 2017 has been lodged.]

Though this is certainly a story about money, it is also about accountability.

If LAPD is continually allowed to behave badly, run up an enormous "bar bill" to cover egregious behavior by the city family over and over again without having to pay out of pocket, things will never improve.

If bartenders Eric Garcetti and Paul Krekorian have a look at the political ramifications in closed session with Mike Feuer and then agree to cover these settlements, we're doomed.

Before going further, we should be clear that we have sympathy for the 39% of police officers who are “honorable” enough and who try to do right.

And whether Paul Krekorian likes it or not, he is the erstwhile "jefe general" of the city's harassment, retaliation, and discrimination program.

A claim goes to the City Claims Board comprised of Mayor Garcetti or Designee, Council President Martinez or her Designee, and City Attorney Mike Feuer or Designee. These officials can designate anyone, literally send their massage therapist in there if they want to, which is odd, because it's an important job involving millions of dollars.

Paul Krekorian is like Sam Drucker from Pettycoat Junction--the bellman, the desk clerk and the room service attendant, all in one. He's the Frank Cady of claims.

We've previously opined on how agencies should not be permitted to scheme and settle in the backroom. If the negligent city council and Mayor had harvested the public outrage necessary to shut this retaliation mill down, as we expected them to do $40 million dollars ago, we might not be facing so many lawsuits by and against city officials.

We need a first responder.

The Los Angeles Police League has a proud and distinguished history representing over 9,900 dedicated and professional sworn members of the Los Angeles Police Department. The league has been a critical organization that resides in the heartland of the attorney client privilege. [Whatever that means.]

The League often defends police officers who are accused of committing crimes. Sometimes they even sue their own department for retaliation, like outspoken leader Jamie McBride, who knew what he had to do when he was squeezed to lie about something by LAPD brass--he filed a lawsuit and collected $1.5 million dollars. That’s Sachi Hamai money.

Angelenos may not realize that the work of LAPPL includes more than just protecting bad cops and blocking the prosecution of killer cops, it also includes influencing elections and making hefty donations to local politicians.

One unintended consequence of all that civic engagment is that the Mayor Garcetti and Krekorian and the rest of council are weak and beholden.

Perhaps the solution lies across the collective bargaining table with LAPPL.

None of us like retaliation, harassment and discrimination, so we all need to agree to get rid of the blank check mentality, where officers are constantly suing their own corrupt department and collecting.

The timing is good.

The Mayor is reportedly "ecstatic" and McBride has announced that he wants to work on reducing deaths and random attacks that are up in Los Angeles. He’s looking forward to digesting the first of three reports indicting LAPD's performance during the protests following the murder of George Floyd.

It's true that pre-pandemic, with surging revenue and low crime rates, it was easier to loaf around in pods of six banking Metro overtime and defending officers for alleged misconduct, but the good old days are over.

The pandemic and protest culture have changed everything.

Now is the time to let frequent litigator Carol Sobel, who said “How many times do you have to be sued on the same issues before you develop a policy?” to retire in peace with the knowledge that her entire adult life suing the city has not been in vain.

The truth is the LAPPL is the only organization that can police the police from the inside. The League's funds, according to their website, are frequently used for legal matters.

Garcetti should unsign the motion he signed on March 3, or make a new motion to send the bill to the LAPPL.

The league can cover the entire $1,995,000 cost of this egregious breakdown among their ranks with a modest assessment of $201.00 per LAPPL member.

But we also need a commitment to zero tolerance for cops suing the department repeatedly allowing 'bad actors' within the department to get off with 'no fault' settlements.

Officers, if you see something, say something, for god sakes. The people are behind you.

Given all of the overtime that we not-so-happily pay out each and every time anything goes remotely wrong in the City of Los Angeles, LAPPL, as part of the city family... this one is on you.

(Eric Preven is a long time Los Angeles activist and an occasional contributor to CityWatch.)