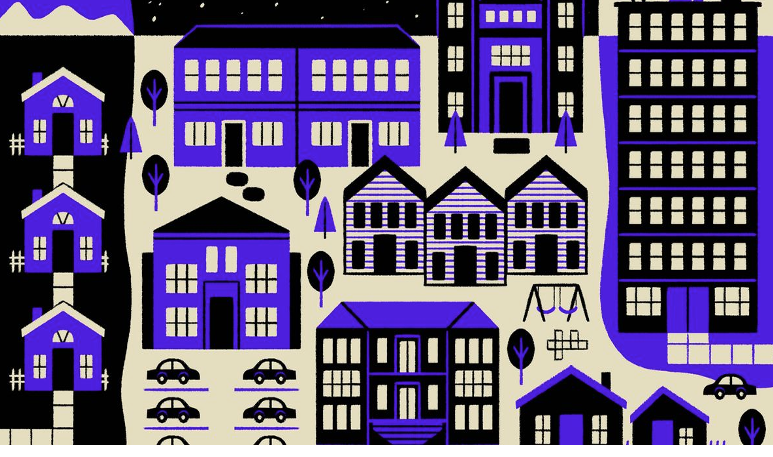 NEED MORE THAN SUBURBS--Anybody who pays attention to the news knows that there’s a heated, ongoing debate in LA, and across California, about how to solve our housing problems.

There are lots of different proposals floating around, but the message we hear most often from elected officials and the development community is that we have to up-zone to allow a whole lot more density. The argument goes that it’s just a matter of supply and demand. If we up-zone our cities and up-zone our suburbs, that will unleash the power of the free market and we’ll have plenty of cheap housing for everybody.

One idea that’s especially hot right now is the proposal to up-zone areas dominated by single-family homes (SFH). Some State legislators have embraced this approach, resulting in bills like SB 1120.

The City of LA hasn’t yet made a move to up-zone SFH areas, but the concept is popular among local progressives who believe we just need to build more housing. Heated debates have erupted over the topic on social media. At a recent hearing on the Hollywood Community Plan Update (HCPU) some members of the public expressed enthusiastic support for ending SFH zoning.

It’s easy to see why the idea is popular. Young people, especially young people of color, are finding it difficult or impossible to afford housing these days. Whether you’re renting or buying, prices are sky-high. If you accept the argument that just creating more supply will drive prices down, it must seem insane to maintain zoning that only allows single-family homes. The argument is that older, affluent homeowners are selfishly defending their own turf, shutting out young people who struggle to make ends meet. Proponents of up-zoning SFH areas also point to the history of racism that used tools like zoning to promote segregation.

Taking the last point first, there’s no question that racism has been a huge factor in housing policy in LA (and across the nation). There’s a well-documented history of real estate interests working with city officials to favor whites over people of color. It’s naive to think that racism doesn’t still play a part in the housing market today. Beyond that, it’s completely understandable that young people who can barely afford to pay the rent would look at the suburbs and ask why some people own single-family homes when they’re just a step or two away from homelessness. And there’s another reason the idea of up-zoning SFH areas is attractive: It’s simple. If just building more homes will allow everyone to have housing, how could anyone argue against it?

And that’s the problem. The way case is being stated is too simplistic. It assumes that all we have is a problem of supply and demand. But the 21st century housing market is far from simple. There are many reasons why housing is so inaccessible for so many people. Zoning is a factor, but it’s just one aspect of the problem. The biggest factor, one that’s often ignored in heated housing debates, is that real estate has become a global industry powered by trillions of dollars in investor cash. In The Vacancy Report  (SAJE/ACCE/UCLA Law, 2020), researchers point out that in recent decades housing has rapidly become financialized. Private equity and corporate entities have come to dominate the housing market, and they’re only interested in getting the highest rate of return as quickly as possible.

So if we’re talking about up-zoning, it’s important to say up front that the value of urban and suburban land is determined by how much you can build on it. As soon as you up-zone a parcel, its value increases. The more you can build, the more it’s worth. If you take a parcel that’s zoned for one single-family home and up-zone it to allow four, eight or more units, you’re actually making the land much more valuable and therefore much more costly. The cost of land in LA is already extremely high and increasing allowed density will drive the cost even higher.

If the key issue is the lack of affordable housing, up-zoning by itself does nothing to solve the problem. As Patrick Condon points out in his book Sick City, when a city just increases allowable density, it’s really increasing the cost of the land, and that additional cost is ultimately paid by the household that’s renting or buying. The benefit goes to the landowner, not the renter or buyer. For a solution, Condon holds up Cambridge, Massachusetts, where city officials adopted an ordinance that allows increased density but only for the construction of permanently affordable units.

This is a radical solution, and one that probably has no chance of being adopted in a city like LA. The first people to object would be real estate investors, who would argue that they can’t possibly make a profit by building affordable units. Exactly. Because the Cambridge ordinance includes strict affordability requirements, it increases allowable density without jacking up the value of the land. This opens the door to not-for-profit affordable housing developers who can build what we most need: housing accessible to middle-income and low-income people. California legislators claim that bills like SB 1120 will help solve our housing problem just because they increase density, but without an affordability requirement, we might as well just be stuffing cash in the pockets of real estate investors.

And now back to the Hollywood Community Plan Update. The HCPU Community Plan Implementation Overlay (CPIO) is also based on the idea that increasing density will solve all our housing problems. It offers generous incentives for residential projects in Central Hollywood that include some affordable housing. Projects that offer between 10% and 23% affordable can receive a 100% density bonus, along with other incentives like increased floor area ratio (FAR) and reduced setbacks.

This is actually a rehash of the Transit Oriented Community (TOC) Incentives, a program that’s already in place. The City boasts about the affordable housing created by the TOC program, but what they don’t mention is that many TOC projects involve the demolition of existing rent-stabilized (RSO) units. The City does require replacement units to be built, but it allows the developer to count replacement units toward the affordable total.

So a project recently approved at 4629 W. Maubert includes 17 new affordable units, but it also involves the demolition of 14 RSO units, meaning we have a net gain of 3 units accessible to low-income households. The TOC approved for 1920 N. Whitley includes 3 affordable units but replaces 3 RSO units. No gain there. At 1341 N. Hobart the approved project offers 7 affordable units, but will erase 9 RSO units, meaning a net loss of 2. These projects will produce dozens of new high-end units, but there’s no shortage of those. What we really need is housing accessible to low-income tenants.

Since the vast majority of housing in Central Hollywood consists of RSO apartments, the hefty incentives offered by the HCPU are basically putting a target on the backs of renters who live in the area. For instance, a developer buys a property containing a rent-stabilized four-plex where existing zoning would allow 20 units. Taking advantage of the HCPU density bonus, they propose a new building with 40 units, including four extremely low-income units to satisfy the affordable requirement.

The developer gets a huge profit as a result of doubling the allowed density. The RSO tenants get an eviction notice. And there’s no net gain in low-cost housing. In other words, by jacking up density in Central Hollywood the HCPU incentivizes displacement.

And it gets even better for developers. Under the Plan’s CPIO, City Planning can approve the project without holding a single hearing. There’s no requirement for community engagement, and no possibility of appeal. If the project meets the CPIO’s requirements, it’s a done deal.

If just increasing density made housing more affordable, Manhattan would be one of the cheapest places on earth to live. It’s not. It’s one of the most expensive. New York City has been on a building binge over the past decade, with massive up-zoning leading to a swarm of super-tall skyscrapers.

What’s the result? A glut of units at the high-end of the market, while middle-income and low-income households are still struggling to keep a roof over their heads, in spite of inclusionary zoning requirements that were supposed to deliver affordable housing.

Increasing density can bring benefits, but only when coupled with careful planning. Sweeping proposals to up-zone large swaths of urban or suburban land will do nothing to increase affordability. They’ll just funnel more money into the bank accounts of real estate investors. And up-zoning urban land can be especially dangerous. Without strong protections for tenants (which the HCPU does not have) density bonus measures will likely lead to even more displacement.

There are no simple answers. Up-zoning by itself will not solve anything.