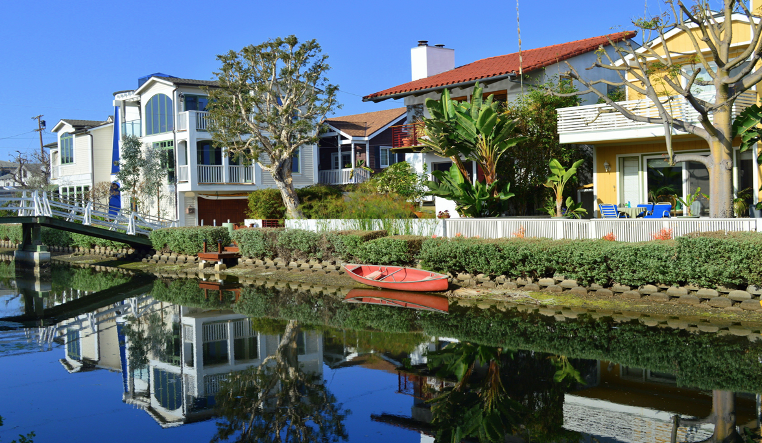 LA REAL ESTATE--The property Jordan Mazer bought in December is the classic Venice beach house in more ways than one.

The $2.225 million clapboard house is close enough to a local surf break that Mr. Mazer, a 33-year-old human-resources executive for a videogame company, can run to it with his surfboard tucked under his arm. Another thing that makes his property emblematic of the neighborhood: He paid $213,000 less than the buyer in 2018, and $450,000 less than the buyer in 2016. The home, for which he paid over $1,000 a square foot, is near the beach but also near the Venice boardwalk, where scores of homeless people are now living.

The property market in Venice, once a working-class community that experienced an extraordinary run-up in prices from 2012 through 2019, is taking a pause. From 2012 to 2019, prices grew by an average of about 17% a year in Venice, vastly outpacing price growth in the rest of Los Angeles, according to an analysis by real-estate website Zillow. Those trends reversed in July, when price growth across Los Angeles began to outpace price growth in Venice. Throughout the pandemic, while area home prices rose in neighborhoods such as Brentwood, Pacific Palisades and the beaches of Malibu, homes over $3 million in Venice have been a tougher sell, local agents say.

Price paid per-square-foot for a single-family home in Venice dropped by 5.7% in 2020, compared with the year prior, according to Jonathan Miller, president of appraisal company Miller Samuel and the author of the Elliman Report, a market study. By contrast, per-square-foot prices for single-family homes in upscale parts of the Greater Los Angeles area showed an increase of 3.2%, he said.

Inventory has also grown in Venice. There were 43.2% more single-family homes on the market in 2020 than there were the year prior, according to the report. Some agents blame the shift on pandemic buyers looking for larger homes outside of Venice. Juliette Hohnen, an agent with Douglas Elliman, said that Venice’s draw has long been its urban-style living, cool stores and restaurants, all hard hit by the pandemic. That has prodded some residents to abscond to the suburban ambience of Santa Monica, Pacific Palisades, and Topanga Canyon, she said.

But a number of local real-estate agents cited another reason for the Venice market’s troubles: the city’s growing homeless population.

“I’m sure a lot of it is the homeless situation, but it is probably also the overpriced listing situation,” said CJ Cole, an agent with The Agency who has specialized in Venice for over 30 years.

In 2020, Venice, a neighborhood of just over 3 square miles, was host to 1,981 homeless people, up 57% from 2019. The homeless population in Los Angeles County rose by 12.7% during the same period, according to data from the Los Angeles Homeless Services Authority.

On March 17, 2020, in response to the COVID-19 crisis, the Los Angeles City Council approved a measure suspending enforcement of laws that prohibited people from leaving tents assembled during the day, thus legalizing encampments that have sprouted throughout Venice and other parts of Los Angeles. Mike Bonin, the 11th-district council member who serves the Venice area, said homelessness is increasing across Los Angeles and consequently is also growing in Venice. “Another reason is there is open space on the beach to sleep,” he said.

“I’m sure the fact that people are living on the street is impacting real-estate values where it is most concentrated,” said Mr. Bonin. The solution isn’t to outlaw tents or encampments, Mr. Bonin said. Instead, “I want to build more homeless housing and homeless shelters in Venice” and throughout the West Side.

Klaus Moeller, a co-owner of a Ben & Jerry’s ice-cream franchise in the heart of the Venice Boardwalk, said that as the encampment has grown throughout the COVID crisis, his sales dropped by 70% because neither visitors nor local families come to his store anymore.

“There were always hippies, skateboarders and people smoking pot” on the boardwalk, Mr. Moeller said. Today, he finds the scene more menacing, saying he has witnessed drug dealing and stepped over hypodermic needles on the beach.

Technology companies such as Snapchat and Google leased commercial space in Venice, burnishing the area’s reputation as the epicenter of Southern California’s tech industry. Developers bought up small cottages and transformed them into larger, modern luxury homes.

Russ Cletta, a 56-year-old landscape architect, and his partner Harry Gundersen, a 56-year-old computer visual-effects artist, moved to Venice in 1992. In 2003, the couple paid $430,000 for a 2,336-square-foot home built in 1909, as part of a larger deal in which they bought an adjacent lot and cottage (and a friend bought a lot adjacent to that). The couple spent roughly $300,000 on renovations of their residence, Mr. Cletta said.

The home has dramatically increased in value. Tami Pardee, whose brokerage is based in Venice, didn’t visit the property but based on square footage and location, estimated its value at roughly $3 million. If the couple had put the home on the market in late 2017 or early 2018, when Ms. Pardee said that similar homes were in peak demand, she estimated it might have fetched $3.2 million.

But some of the forces that have contributed to that valuation have caused the area “to lose some of its funk,” Mr. Cletta said. Abbot Kinney, Venice’s famous shopping street, is “too bougey” for their taste, Mr. Cletta said, using a slang term for bourgeois and fancy.

Now Mr. Damavandi wants lightning to strike again, though it may be trickier. In 2015, he paid $1.53 million for another Venice property that he has since rebuilt with “lots of COVID amenities,” including a pool and tropical landscaping.

Mr. Damavandi’s second house first came on the market in late 2019 asking $5.8 million. In February of last year, it was listed with a brokerage at $5.548 million. He didn’t rush to lower the price because he enjoyed living in the home himself throughout the pandemic, he said. In late January, he relisted it with a new agent, Ms. Hohnen, and a slightly lower price, of $5.395 million.

The handful of houses in the $5 million to $6 million range that sold in 2020 were on the market for an average of 63 days, Mr. Miller said, making Mr. Damavandi’s listing an outlier.

Mr. Damavandi believes his house will now find a buyer as the COVID crisis subsides. He said the home is near bars, restaurants, and shops, and said it is less affected by the problems of living in an urban setting because it has dense foliage and is designed so the home isn’t visible to the neighborhood and vice versa.

Mr. Mazer takes the long view on Venice, believing he got a great deal on beach property that would cost far more in Manhattan Beach or Malibu.

“I still believe Venice will be vastly improved in over the next 10 to 20 years,” he said. “There’s a lot of room for improvement.”