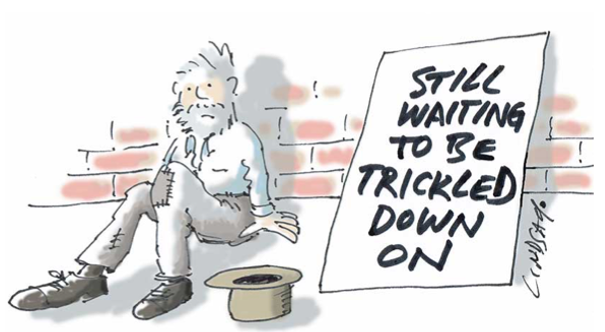 This was on full display in its recent editorial, “L.A. can begin to solve its affordable housing crisis in 2021.” The article’s essence was that the update of LA’s Housing Element – a section of LA’s rickety General Plan -- should be used to increase the market value of private parcels through widespread up-zoning. In short, if real estate developers could build larger, taller, denser buildings on in-fill sites, the market values of these parcels will soar. Property owners can then either flip their property to pocket this windfall, or they can invest in expensive apartment buildings for long-term profits. Either way the LAT’s zoning deregulation proposal enriches them.

The external appearance of the LAT’s proposal is quite different from this cloaked reality. The paper’s trickle-down claim is that increasing the zoning capacity of residential neighborhoods will, “cure homelessness, protect tenants at risk of displacement, reduce segregation, promote fair housing, enact equitable development, and address the shortage of affordable housing.”

Only if this were true, and not just a ploy to keep the latest housing bubble afloat by helping real estate investors flip parcels and build expensive housing in such desirable Los Angeles neighborhoods, as Downtown LA (DTLA), Miracle Mile, Hollywood, and Warner Center.

In fact, a careful look at the LAT’s zoning proposal, and similar proposals from developer Astro-turf lobbying groups and the faugressive charlatans reveals that that their up-zoning cure make the disease of over-priced housing and homelessness worse. In DTLA, Hollywood, and other hot Los Angeles neighborhoods, existing zoning is already generous. It allows virtually unlimited construction, most of it without height limits. The result of the LAT’s up-zoning proposal would be more expensive, auto-centric apartments rented to affluent tenants.  They might live a block from mass transit, but they would rarely take a bus or subway. Instead, they depend on cars for transportation, mostly their own.

If City Hall adopts plans and ordinances to increase the zoning capacity of Los Angeles neighborhoods, it will not reverse these trends; instead it will produce three adverse outcomes that debunk the alleged benefits of up-zoning.

These consequences of up-zoning undermine the paper’s claim that early 20th century zoning practices are responsible for racial segregation a century later. While this argument might pass muster with low information voters, it is completely wrong for two reasons.

First, LA’s zoning has been mostly constant during the post-WW II era, yet during this same period LA has experienced major changes in the settlement patterns of its Latino, Asian, African-American, and white residents. USC researchers have documented these changes from the 1940 to date.  In this period, legislation and legal decisions blocked racial covenants and red-lining. Fair Housing laws largely stopped discriminatory practices by banks, rental agents, realtors, and landlords. Anti-racist laws in employment reduced the close relationship between racial and economic inequality. This is further revealed by a second map on ethnic diversity in LA between 1990 to 2010, prepared by CSUN geography professors James Allen and Gene Turner. Despite fixed zoning laws, most Los Angeles area neighborhoods already had high levels of ethnic diversity by the dawn of the 21st century.

Second, LA’s affordable housing crisis will not be remedied by allowing apartment complexes, four-plexes, and townhomes in single-family areas.