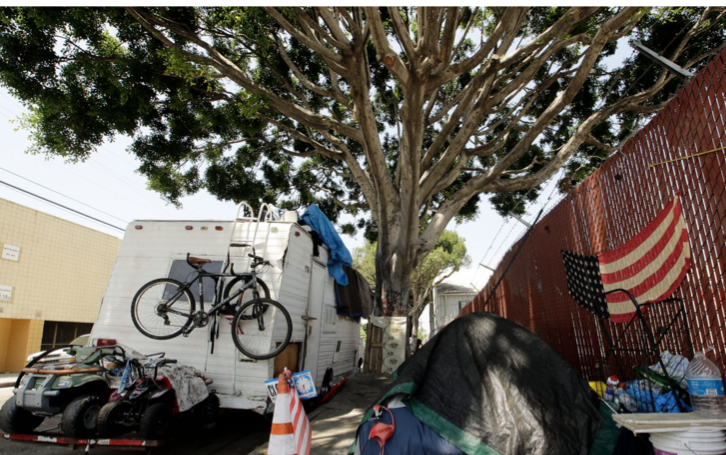 EASTSIDER-Best explanation of how overnight parking on LA City Streets has been enforced was given to me by a fellow journalist who blogs at michaelkohlhaas.org.

1. People complain to a CD.

2. The CD organizes evidence from residents and LAPD and brings LADOT into the conversation.

3. The motion is written.

Back in the day of Ed Reyes and Dennis Zine, I’m sure that was true. And it was also true back then that the police and City felt free to tow cars any time they wanted. Of course, that was before the homeless crisis, including a subset of people living in their cars, or trying to.

Anyhow, prominent on the LA City Council Agenda for Wednesday, February 10, 2021 was another attempt to root these homeless folks from living in their vehicles like RV’s. The difference this time was that Gil Cedillo and Curran Price have teamed up to do the deed with a new twist. Here’s the Item and text:

DIRECT the Los Angeles Department of Transportation (LADOT), upon approval of this action, to post signs giving notice of a Tow Away, No Parking restriction for oversize vehicles within the specific hours detailed.

AUTHORIZE the LADOT to make any technical corrections or clarifications to the above instructions in order to effectuate the intent of this Resolution.

Fiscal Impact Statement: Neither the City Administrative Officer nor the Chief Legislative Analyst has completed a financial analysis of this report.

I should point out that this was not the only motion. No sir, CD 3, CD 7,and  CD12 joined in. CD 6 did a variation on the theme, with establishing a PPD (Preferential Parking District).

A lot of this goes back to the homeless crisis around 2012, and a Court Decision.

“LA LAW-In a decision hailed as a human rights victory by homeless-rights activists, a federal court struck down a decades-old Los Angeles law prohibiting the use of vehicles as residences.

The ordinance, Section 85.02 of the Los Angeles Municipal Code, declared, “No person shall use a vehicle parked on or standing upon any City street or upon any parking lot owned by the City of Los Angeles or under control of the Los Angeles County Department of Beaches and Harbors as living quarters either overnight, day-by-day, or otherwise.”

In the case, Desertrain vs. City of Los Angeles, three judges on the U.S. 9th Circuit Court of Appeals unanimously overturned a lower court ruling that upheld the ban. Dating back to 1983, the ban wasn’t enforced until 2010, when an LAPD task force was created in response to complaints centered in Venice neighborhoods.”

You will notice, like a lot of things, the sudden enforcement was over those inconvenient homeless people who still had the wherewithal to get an old RV to keep from living on the streets. Think about it.

The next major event was unveiled in late 2015. Like many things Mayor Garcetti does, he appointed a task force that came back with a spiffy 40-page Report.

They came back with a 40-page report filled with recommendations for actions the city should take.

This week the public got its first chance to give feedback on the report when it was presented to the Los Angeles City Council Transportation Committee.”

For those interested, a link in the above quote will take you to the actual report. Unfortunately, about the only idea in the Report that dealt (indirectly) with overnight RV parking for the homeless, was the old tax them ‘till they bleed PPD’s.

And in 2016, the City Council was back at it again, this time at the behest of the Media District Bid.

“The Media District BID is particularly attractive to people living in RVs because it’s industrialized, so no night-time neighbors to annoy, and it’s close to the center of Hollywood. Especially on Lillian Way and its cross streets, Romaine, Willoughby, and Waring, there has been a thriving but quiet community of RV-dwellers for years on end. But the Media District BID hates it. They just can’t deal with it. For instance, see this email chain from March 2015 where Hollywood cop Julie Nony discusses how to get rid of them with erstwhile Media District BID director Steven Whiddon and a bunch of overprivileged proprietors who don’t understand the concept of public space. But, probably not surprisingly, Steven Whiddon was unable to orchestrate any lasting action.”

Then in 2019, the City was back at it again, figuring out how to “legally” prohibit homeless RV’s:

Sleeping overnight in cars, vans and RVs will be prohibited again in many parts of Los Angeles, after the City Council voted Tuesday to reinstate rules that limit where people can live in their vehicles.

The decision extends the LA regulations, which had expired at the beginning of July, until January. Under the rules, people cannot spend the night in their cars on residential streets, or live in their vehicles at any time within a block of a park, school, preschool or day care facility.

Further, as recently as late last year, the City was playing around with changing the rules back again:

“Relaxation of these restrictions was originally slated to end October 1, but the LA City Council voted on September 30 to push resuming enforcement back to October 15, to allow time for outreach to be conducted, notifying the public of the change.

Impounding of vehicles in which there is vehicle dwelling will meanwhile be delayed for 30-60 days, to allow time for development of a next steps plan.

I don’t quite know why the story of the almost homeless sleeping in RV’s bothers me so much, but it does.

It just feels like the City and Mayor who have sold us all out to big bucks developers and lobbyists, could care less what happens to the predictable displacement they fueled: homelessness and people sleeping in cars or RVs.

The City, the Mayor, and you and I know in our guts the truth. We already know that the City is simply incapable of dealing with all of the current homeless people. Those living in their RV’s, however, tend to be more recently homeless, and still have some wherewithal to get an RV as they slide down the economic ladder.

So why not concentrate on them as maybe being able to recover and get a job as well as a residence? It’s obviously a much smaller group.

Passing restrictive conditions to try and drive them off the streets to please business owners and homeowners, has, so far, only resulted in non-compliance and litigation. If I remember correctly, the City Attorney hasn’t fared so well in the courts, either.

I wonder how much time, energy, and money the City family has expended on harassing people living in their RV’s – people who have no alternative. Is it because, politically, they can’t fight back?

No one likes a bully.

(Tony Butka is an Eastside community activist, who has served on a neighborhood council, has a background in government and is a contributor to CityWatch.) Photo: ABC News. Edited for CityWatch by Linda Abrams.