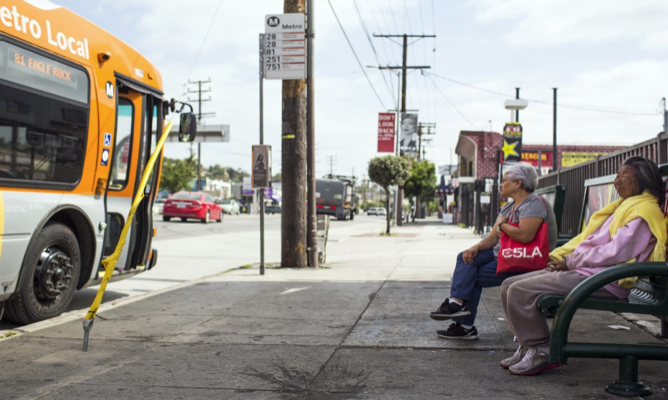 TALKING TRANSIT-The editors in the February 1, 2021 edition of the Los Angeles Times wrote that covered bus shelters are needed to improve the quality of riding buses.

I agree. I have been fighting for more covered bus shelters for years. It remains a hard-fought battle.

The Times rightly states that “. . .if we want to cut auto emissions, fight global warming and improve mobility, we have to make riding public transit far more reliable, efficient -- and comfortable.” I am in complete agreement and have been saying this during my battles on this issue.

To reduce my negative contributions to air pollution in Los Angeles, and to reduce my carbon footprint, individually, to slow global warming and climate, I, a car owner, have been steadily riding buses and trains since 1992. My quixotic experiences in trying to secure the side and roof covered bus shelters go back nearly as far.

The hard truth, I found, is that final approval for side and roof covered bus shelters comes not from Metro, as the Times implies. In the City of Los Angeles, approval comes from each council district.

One of the longest battles I have fought for side and roof covered bus shelters has been for installing them along Santa Monica Boulevard from Century City to Sepulveda Boulevard. My attempts to have these most needed transit amenities built have been thwarted by some people in the neighborhood of City Council District Five. Their contention is that if they allow covered bus shelters with ads, their whole way of life will crumble.

Side and roof covered bus shelters are placed and maintained by the advertising firm Outfront JCDecaux (photo left), according to the Times. During my efforts on behalf of transit riders, I have been told repeatedly that if this ad firm is allowed to place their side and roof covered bus shelters with ads along Santa Monica Blvd., they will also be able to erect some kind of lighted pillar with ads somewhere along the boulevard, and this pillar will lead to a local Armageddon of visual blight.

In my conversations with Outfront JCDecaux, they confirm that if they can erect this ad pillar, then they will install the side and roof covered bus shelters with ads.

For drivers, the reconfigured Santa Monica Boulevard is an improvement, but for bus riders, parts of it are a nightmare. One area is a desolate no-man’s-land of bus stops for Century City. Another is the area between Overland Avenue and S. Beverly Glenn Boulevard. There, the dirt embankments have been covered with concrete and the bus stops consist of strange cutouts like a balcony, accessible by a ramp from the sidewalk. This puts the bus rider in complete isolation and creates a blind spot where, if confronted, one can be trapped where the only escape would be to run into traffic. In the dark of night, the situation is worse. I know this because I’ve used them.

After the reconfiguration, I was told that the locals somehow convinced some group with the authority to have this stretch of Santa Monica Boulevard noted as some type of scenic highway. This became yet another obstacle to getting side and roof covered bus shelters in this part of West Los Angeles.

Along today’s Santa Monica Boulevard there are bus benches with ads and huge billboards, which to me does not constitute a scenic highway. How is that worse than ads on side and roof covered bus stops, or the proposed ad-pillar? This is something I’ve not yet been able to comprehend.

Moreover, on Sepulveda Boulevard at Santa Monica Boulevard there are side and roof covered bus shelters, with ads, not more than twenty yards from the intersection. Is their supposed visual blight searing the sight of people? No. They have been there for years, sheltering bus riders without creating a local visual Armageddon.

What side and roof covered bus shelters provide is needed shade for bus riders. With the warming planet we bus riders must have relief from the blazing sun. Waiting for buses at non-sheltered bus shelters causes sun exposure that can lead to increases in skin cancers.

Other important benefits of side and roof covered bus shelters, not mentioned by the Times, are protection from rain, wind, wind-blown rain, night fog and dampness.

I have seen young mothers with their infants in their arms suffering the same fate. Some had umbrellas, others did not. Just try holding an object in your arms, like an infant, along with the needed bags for the baby’s care, as well as an umbrella in the rain and wind. I’ve seen some women with ragged, broken umbrellas; others had none. I am certain if they had the choice, they would have driven themselves, or been driven, but there they were in the cold, on a wet sidewalk, open to the elements, waiting for a bus.

When the next rains come, I recommend those who oppose side and roof covered bus stops go and stand out in the open, without any overhead shelter, anywhere along a street -- the more major the thoroughfare the better -- with or without an umbrella. Do not wear rain parkas or weather-proof clothing. Bus riders can’t wear them because when they board and sit on a bus, they will leave wet seats for the next riders.

Stand in the rain for a minimum to fifteen minutes. This is roughly the average time between buses in the day, though it easily can be longer. At night, the buses run even less frequently.

This way, you will then get an inkling of the experience riders have who wait for buses in open inclement weather. If you are riding buses, you will be entering a bus, and maybe more than one, and maybe a train, before seeking some kind of refuge at your destination. If this is in the morning, and you return the same way later in the day, and it is still inclement weather, this is repeated before arriving at the comfort, dryness, and warmth of your home.

I’ve been talking about just one short mile of Santa Monica Boulevard in West Los Angeles out of the many thousands of miles of roads buses roam in Los Angeles County. The fight for more side and roof covered shelters can take place anywhere. But more than likely, in the poorer areas of the city, such shelters would be welcomed, not opposed.

As a bus rider who has stood at open bus stops under an umbrella during downpours, particularly at the intersection of Santa Monica and Sepulveda Boulevards, with the wind screaming through the office buildings blowing the rain sideways, hitting me in the face because there are no side and roof covered bus shelters, I relish the thought of them being installed.

However, like that cold rain on my face, the cold reality is that locals and an ad company will continue to create misery for people trying to wait for a bus.

(Matthew Hetz is a Los Angeles native. He is a transit rider and advocate, a composer, music instructor, and former member and president and executive director of the Culver City Symphony Orchestra. He is a CityWatch contributor.) Photo: Maya Sugarman/KPCC. Edited for CityWatch by Linda Abrams.