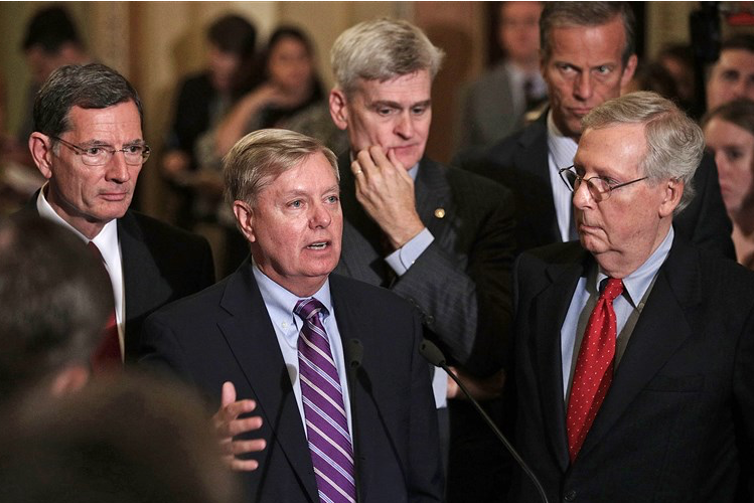 GELFAND’S WORLD--The Republicans in the U.S. Senate are in kind of a lose-lose situation.

At least that's the case for the ones who plan to run for reelection in either 2022 or 2024 and are from a state that votes across party lines once in a while. Here are the Republican senators who are up for reelection in 2022 who might face any kind of opposition in either the primary or the general election (data from Ballotpedia):

* Of these, Burr and Toomey have already announced that they don't plan to run for reelection, so you might equally count these as open seats where any Republican primary winner is going to have to worry about avid Trump supporters vs. non-Trumpers.

North Carolina, Pennsylvania, and Wisconsin are considered the states that are most on the edge, the ones that are able to flip in either direction, and Florida as a likely, but not solidly Republican state.

In 2024, these are the Republican senators with the closest likely battles:

For the Republicans in swing states, any vote on whether to convict Donald Trump of inciting the insurrection is damned if you do, damned if you don't. The problem will come if perhaps 5% of previous supporters get peeled away by distaste over what was a truly distasteful matter. Voters are going to see those videos of the furious mob trying to sack the capitol building, just as we have been seeing them on local television this week.

The few Republicans who vote in favor of convicting Trump face an even bigger problem because they got elected through Republicans voting for them. Since a lot of Republican voters are Trump supporters to the core, a vote against Trump is possibly political suicide.

It's interesting to imagine these issues coming up for the go-along senators who have enabled Trump's bad works all along, but it's also unfortunate that the closest thing to treason this nation has experienced in two centuries is going to be passed over out of partisan weakness.

I therefore offer you a bit of nonpartisan fantasy, an idea that would provide the chance for statesmanship to the Republican Party as a whole, while also doing much to bring rationality back to the political universe.

The idea is simple. The Republicans could, in theory, put together enough senatorial votes to get Trump off the legal hook, but not so many as to give him an excuse to claim exoneration.

I'm saying that in this fantasy universe, the Republicans in the U.S. Senate would put together 16 votes to convict, so that Trump, with 34 votes to acquit, would become the second president to survive an impeachment trial by a one vote margin.

And by this bare, one vote margin of victory, Trump would forever be cast aside as acceptable within the political universe.

Sure, it's about as unlikely a chance as there is, but the more votes (of both parties) there are to convict, the less powerful Trump will be in this post-presidential time. Even if there were only 10 Republicans voting to convict, it would be a message that would benefit this country enormously. It's of interest that Richard Nixon was driven from office by members of his own party for a crime that was a lot less serious than what Trump did. It's truly unfortunate that the political system has devolved so remarkably, to the extent that well documented crimes akin to treason are waved away by Republican senators.

In this regard, it is of interest that the currently most ignorant senator, Tommy Tuberville, has explained that he told Donald Trump directly, over the telephone, that Vice President Mike Pence had been removed from the senate chambers by his security detail, yet Trump continued to do nothing to call off his mob. The reconstructed timing of these events suggests strongly that Trump sent off a Tweet attacking Mike Pence well after this phone call. In short, Trump continued to carry on his war against his election defeat even with the capitol under attack, and failed to carry out his Constitutional responsibilities to defend this nation from all enemies.

And yet my simple little fantasy that the Republicans in the senate would set aside their political fears for a moment and do the right thing is likely to be just that -- fantasy.

We've got to think that a lot of Republican office holders have long since been sick of having to put up with Trump's irrationalities, his rantings and ravings, and his clear-cut dishonesty. People who had to create at least a semblance of verisimilitude (I don't type that word very often) had to convert their entire political lives to the hackery of nodding along to Trump's lying. Once in a while it got to be too much. We remember Helsinki and the attack on American intelligence agencies in order to support the word of Putin, but for the most part, they have soldiered on -- not exactly bravely, but they soldiered.

So if they could only conjure up a real rebellion, they could put the remainder of Trump's political career out of its misery.

Like I said, they could find another ten or eleven senators to take one for the team so that Trump will go down in history alongside Andrew Johnson, and then they can go back to fighting for the next presidential nomination without demeaning themselves to quite the same extent.

Political PTSD, the power of projection, and future revelations

The website Talking Points Memo has been running comments submitted by its readers regarding their thoughts and feelings in this post-Trump era. It's interesting, if not altogether surprising, that a considerable number refer to what we might call political PTSD, and this is combined with a vast sense of relief that they are feeling. A common remark is that they didn't even realize how tense and unhappy they were feeling due to Trump's very existence, until they realized that it is over.

Of course the right wingers have been talking about Trump derangement syndrome for years, but perhaps we might simply reply, "Yes, it did exist, and for very good reasons."

In any case, our fellow citizens have been waking up to a government that is intended to function, whether or not it always functions well. This is in grim contrast to the years when government agency heads were put in place in order to do as much damage as possible to the official purposes of the agencies. And when it wasn't the protection of the environment or of workers, but the protection of all Americans from a deadly virus, we had political interference with the workings of the CDC and the FDA. It is a shameful record and worthy of the feelings it is now eliciting among the survivors.

But there is one more element of the Trump personality and presidency that will, I think, be revealed as the years pass. It's been said in various ways, but a simple version goes like this: When Trump accuses somebody else of something, he is really confessing his own guilt.

Psychologists talk about the concept of projection, which is described as people actually thinking that other people think the way they themselves think. We've all seen this in extreme cases where a conniving thief claims that everybody else is the same. He simply can't imagine other people being different.

But for Trump, it's a step worse, because he has been accusing his enemies of thoughts and crimes that are going through his own brain, and he seems to have done so knowingly.

And out of that came the accusations of the rigged and then stolen election. Trump knows that his Republican colleagues have been doing their best to suppress voting by their opponents (and yes, it used to be the southern Democrats before they became the southern Republicans). It's not surprising that he would try to get in the first punch, so to speak, in accusing the Democrats in advance.

It's interesting, if not really curious, that Trump kept pounding on the claim that he did not collude with Vladimir Putin, that he was not asserting Russian interests from the highest office in the country. Military commanders and elected officials looked on in horror as Trump weakened the NATO alliance and looked the other way over every manner of Russian mischief. Helsinki was the low point in terms of the public understanding of this problem, but we don't know how bad it may have been in so many other ways.

It's been suggested (even by those who append comments to this column) that we could see a Republican House of Representatives vote impeachment against a Democratic president as soon as they gain control. And considering that they could gain control in the 2022 elections, that is a credible threat. This is why it is important that the facts continue to come out about Trump's crimes, so that a newly Republican House of Representatives would have to claim that an ordinary, plain vanilla president is guilty of something as serious as what went down on January 6, 2021. To take such action would, of course, be a prescription for a reversal in the 2024 elections, but that's another story for another time.