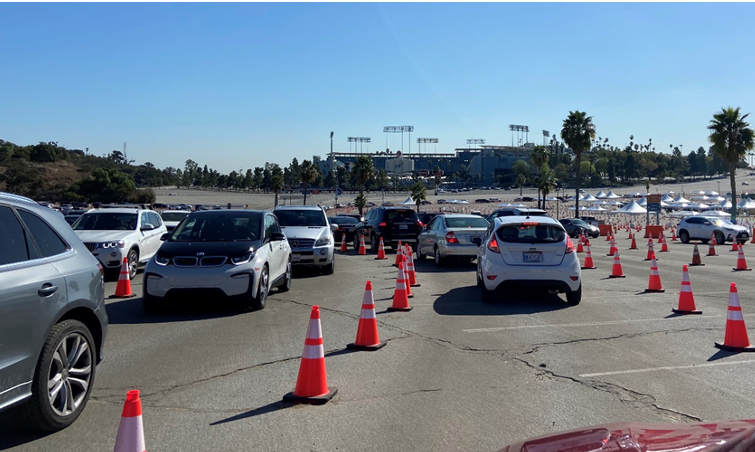 @THE GUSS REPORT-Like a broken clock that is right twice a day, even LA's corrupt and inept governments get things right from time to time.

Last week we trekked to Chavez Ravine with senior kin in-tow for the first COVID vaccine. From start to finish, it was remarkably fluid, efficient, and praiseworthy. (Our local politicians gasp in stunned amazement at genuine praise from this column, but it does happen when deserved.)

From our arrival at the Stadium to the moment we were allowed to depart, just about 75 minutes had passed, which is exceptional considering thousands of others politely waited for their vaccines with us.

It is a model worth emulating, at least in communities where such a setup works. Several factors at the Stadium made it particularly effective.

One is that the site is drive-thru only. A maze of fluorescent traffic cones and an abundance of well-prepared personnel directed the single-file traffic to areas around the Stadium. Other personnel, equipped with tablets, checked-in each vaccine recipient and marked windshields for how many would be given to people in each car. In fact, many in the queue were people using Uber and Lyft. It was great for a Southern California that is still mostly car-centric but not so good for communities that rely on public transportation.

Another factor is that we went midday on a weekday, which reminds us that legions still can't break away from work and other obligations and must go on a weekend when fewer appointments are available.

Those who planned the Dodger Stadium clinic thought of everything, with Andy Gump present along the route for those in need, garnering understanding nods, smiles and patience when some put their car in park and jumped out.

When we finally reached the vaccine staging area, personnel advised shutting off engines as it would take roughly 30 minutes for a quick review, the shot, and a short wait to ensure against adverse reactions.

Unlike other vax locations where people must stand in line, many got out to stretch, let the dogs out to relieve themselves while others reclined, ate, drank, and watched TV on the iPhones. Just like we do when stuck in traffic on the 101 and the Sepulveda Pass. . .

The pleasant, blue-skied weather certainly helped. And most importantly, everyone cooperated exceedingly well.

If there is room for improvement, it is for the question on everyone's mind; when and by what means would the second shot be scheduled? At some non-drive-thru vaccine clinics, like one in El Sereno, a friend advises that the second vax is scheduled on-the-spot. That said, days later, we received an email advising that ours will be scheduled automatically in the coming days.

Still, it wouldn't be LA without Eric Garcetti spoiling the porridge with outlets reporting that with a few days remaining before he turns 50 this week, the LA Mayor skipped the line and received a vaccine because he was helping out on the frontlines at the Stadium clinic.

Sorry Señor, but a 40-something Mayor of four million people, in a county of 10 million, shouldn't cut in line while real healthcare workers, those with pre-existing medical conditions, transit drivers, immigrants working in kitchens and those in their 80s and 90s struggle to get scheduled for theirs.

It looks, how shall we say, rigged and corrupt, especially after Garcetti previously questioned the trustworthiness of any vaccine developed under President Trump's Operation Warp Speed.

Oh, I forgot. Garcetti only distrusted it before Election Day.

As widely reported, Governor Gavin Newsom's incompetence has given California the nation's worst vaccine rate. Over the weekend, even his most ardent defenders at the LA Times reported massive surges in local Black and Latino COVID death rates. So when will the Times urge local governments to drop every single non-essential pursuit on their agendas and take an all-hands approach to stop the bleeding where it is happening the most and call out those that do not?

Street lighting and tract maps can wait, but the rest of us cannot.

(Daniel Guss, MBA, was runner-up for the 2020 Los Angeles Press Club journalism award for Best Online Political Commentary and has contributed to CityWatch, KFI AM-640, iHeartMedia, 790-KABC, Cumulus Media, Huffington Post, Los Angeles Daily News, Los Angeles Magazine, Movieline Magazine, Emmy Magazine, Los Angeles Business Journal, Pasadena Star-News, Los Angeles Downtown News, and the Los Angeles Times in its Sports, Opinion and Entertainment sections and Sunday Magazine, among other publishers. His opinions are his own and do not necessarily reflect the views of CityWatch.) Prepped for CityWatch by Linda Abrams.