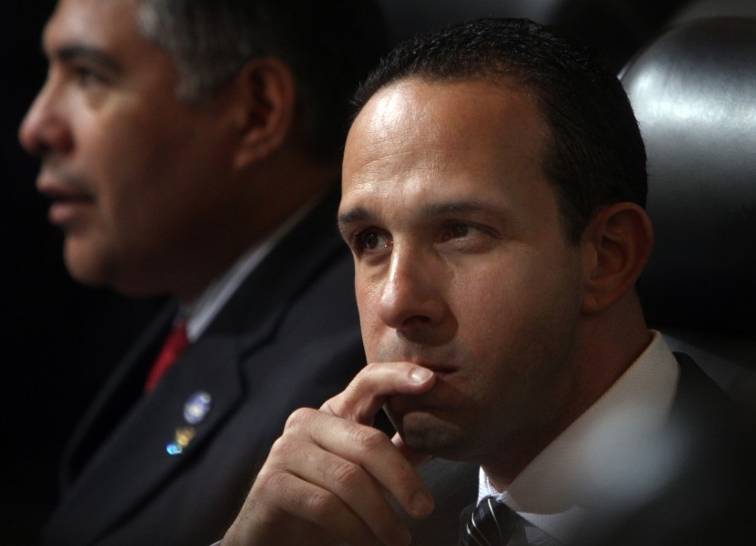 “I conclude that greed and arrogance must have also motivated in part this defendant,” adding that there’s “no adequate explanation as to how he totally lost his moral compass and committed this crime.”   Daily News, Jan 25, 2021

I’ve got some other news flashes for Judge Walter: The Earth revolves around the sun; water is wet, the San Gabriel Mountains are higher than Death Valley.  (Photo above: Former councilman Mitch Englander,)

Due to the vote trading scam which runs Los Angeles City Hall, 10,000 consecutive unanimous Yes votes is not seen as indicative of any vote trading.  The probability of such a vote pattern not being the product of vote trading which Penal Code § 86 criminalized is less than one in infinity, mas o menos.

What Sort of Person Is Judge Walter?

One should be wary of comments on Robing Room; after all, dissatisfied people make complaints.  The following Robing Room observation, however, makes a valid point about Judge Walter.

“When a judge ranks as low as Walter with so many reviewers, you know it is his personal qualities that are at fault rather than people merely unhappy with his substantive rulings.” January 2, 2011

The most common comment is that Judge Walter obsesses over his own unique, petty rules of procedure to the extent that the law and justice disappear.  For our purposes, however, whether Judge Walter suffers from Obsessive Compulsive Disorder is not relevant.  When the city of Los Angeles is disintegrating due to decades of corruption, how can Judge Walter be so completely oblivious to reality?

Does he not see the proliferation of homelessness through the city because the corrupt city hall’s Manhattanization mania and its massive destruction of rent controlled housing?

Is he unaware that people literally die on the sidewalk outside city hall?

Is he unaware that the filth is so terrible that typhus invaded city hall?

Is he unaware that the city of Los Angeles has become so terrible that it is losing population, particularly Family Millennials who are the backbone of any urban middle class?

Is he unaware that in 2014, Judge Allan Goodman ruled that the Garcetti’s update date to the Hollywood Community Plan was intentionally based on fatally flawed data and wishful thinking to the extent that it subverted the law – what we have termed Lies and Myths?  These same Lies and Myth are set forth each day again and again at city hall to the point that Los Angeles has become the nation’s least desirable destination city with the world’s worst traffic congestion (per INRIX).

Perhaps, Judge Walter is mystified why Englander was so foolish as to dip into the bosses’ profits.  Let’s face it, if you’re an assistant manager in a mob run casino, skimming profits is not too smart.

Judge Walter may understand quite well how LA corruption operates.  A developer bribes the councilmember in whose district he wants to construct an illegal project and after a nod to boss Garcetti’s Mayor Fund, the developer is absolutely, positively guaranteed that his project no matter how horrid will receive unanimous approval.  Developers love this scam as they only have to be friendly with one councilmember.  For developers, Los Angeles is like owning a casino where all the tables are rigged.

Then, along come City Councilmembers Jose Huizar and Mitch Englander and they decide to horn in on the action.  All illegal construction has to pass through the city’s Planning, Land Use and Management Committee (PLUM). At this stage citizens submit extensive documentation that the project is illegal, but the traditional function of the PLUM is to urinate on public comments.  However, for greedy and arrogant councilmembers, the PLUM Committee can be a place for a second round of bribes.  The article which best harbingers how the city council vote trading system was becoming too expensive for the developers is the LA Times article on Samuel Leung’s Sea Breeze project.  http://lat.ms/2es9m3t   October 30, 2016, LA Times, A $72-million Apartment Project. Top Politicians. Unlikely Donors,  Who Wrote the Checks to Elected Officials Weighing Approval?, by David Zahniser and Emily Alpert Reyes

Here’s a breakdown on the developer payments for the Sea Breeze Project: Janice Hahn $203,500, Joe Buscaino, $94,700, Mitchell Englander $65,800, Eric Garcetti $60,000, Jose Huizar $30,400, Nury Martinez, $7,700.  That’s $258,600.00 more than went to the original councilwoman Hahn.  The smooth vote trading bribery system was clearly breaking down with councilmembers from all over the city getting a slice of the pie rather than limiting the payoffs to only one councilmember and the mayor.

Let’s be realistic, there are hundreds of billions more illegal projects to run through LA City Council and we cannot let a couple rogue players extort more money out of the developers.  The core of City Hall corruption is a simple two step system: (1) make a deal with one councilmember, and (2) get unanimous city council approval.  We certainly cannot allow greedy councilmembers who have lost their moral compass skim the profits!