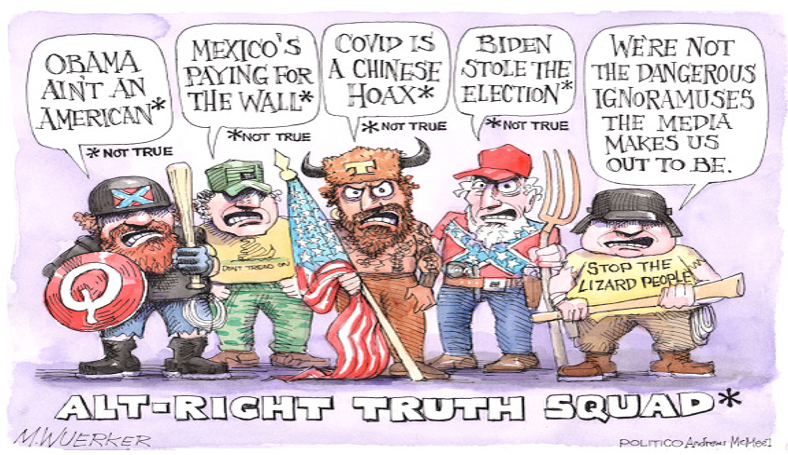 AT LENGTH-For those who were waiting for Mr. Donald J. Trump to become “presidential” or at least change his tone while he was in office, you can now rest assured.

He won’t. He didn’t. Not even with his snubbing of President Joe Biden’s inauguration and Trump’s petty self-indulgent “bon voyage” party.

At least we didn’t have to drag him kicking and screaming out of the Oval Office, evicting him like his father did to so many low rent tenants. I did tell you that he would not go quietly and if anything is more obvious now than before the attack on our nation’s capital on Jan. 6 makes it perfectly clear. It was Trump who was trying to “steal the election,” not the Democrats. Take a deep breath — he’s now gone.

That he riled up the worst instincts in his racist followers, dowsed them with disinformation and malice towards our republic and let them lose on the counting of the electoral vote in congress is prima facie evidence of his contempt for our democracy, our Constitution, and the rule of law. Impeachment is probably too good of a solution for him, but it’s just the first step on what must be done to cure this political virus that has infected our nation for the last four years. Will President Biden be the vaccination against future outbreaks of Trumpism? Hardly, but at least we won’t have to deal with his incessant tweeting.

Let me be clear, DJT didn’t invent the kind of racist uprising we witnessed during his presidency. He only inspired it to become more visible to the rest of the country. White nationalists, neo-Nazis and right-wing militias have been percolating under the radar of the mainstream media for decades. We’ve learned that some of them have been hiding in our police agencies or being trained by our own military. Even the Ku Klux Klan has really never gone away. This comes as a surprise to much of America, but not for many communities of color who have long accused police enforcement as being racist.  Now perhaps we can understand why and deal with it.

Not that every cop in every city is racist, we can’t use that broad of a brush, but we must be able to see that even a few people or units inside of any law enforcement agency has a corrupting influence on the whole force and the perception of those agencies by the people who they are sworn to protect. One bad apple can rot the entire barrel. So what’s Joe Biden supposed to do? He’s got to clean house from the top down, starting with the military, the Justice Department, the FBI, and every appointed political office on down.

Biden’s inauguration speech leaned heavily on the symbolism and words of unity and healing in the face of conflicts and challenges, which is a clear departure from his predecessor. Yet with a greatly reduced audience because of the pandemic and the threat of more domestic attacks on the capitol, there was an air of apprehension and then relief once he and Kamala Harris were sworn in as president and vice-president.

The hardest thing to do moving forward will be to actually convince the die-hard right wing that unity of purpose is stronger than division. That government “for the people” means doing the things that bring the nation together rather than divide it. And at least on this day, Jan. 20, with the capital guarded by heavy security, both national parties were brought together by one common theme, E pluribus unum, Latin for “Out of many, one.”

Trump left the White House early Wednesday, to a celebration for himself that he arranged at Joint Base Andrews — a celebration for which aides were desperately trying to assemble an audience big enough to avoid a Trump temper tantrum — and then on to Mar-a-Lago. Once at Mar-a-Lago, he will presumably sleep in an actual bedroom. At the White House, Melania reportedly slept in the real presidential bedroom suite, while Donald slept in his own bedroom, which was previously a study or den during previous administrations, a source told CNN.

It’s no wonder that Trump was so easily agitated during his term in office as he probably hasn’t had sex with his own wife for the past four years or perhaps since his tryst with Stormy Daniels was exposed. That of course is something I don’t really want to imagine.

So take a deep breath folks, the disaster has been temporarily avoided. The republic has been saved, for now. But as has been quoted since the beginning, “Eternal vigilance is the price of liberty” — a quote often attributed to this nation’s third president, Thomas Jefferson. There’s no guarantee that the next version of Trumpism won’t be inspired by another populist autocrat that claims he’s going to “fix America” and “run it like a corporation.”

On the day of the inauguration, the Bidens spent the afternoon at a ceremonial wreath laying at Arlington National Cemetery at the Tomb of the Unknown Soldier accompanied by former presidents Bill Clinton, George W. Bush and Barack Obama. During that time, a deep-deep-cleaning of the White House was completed, and the Biden’s belongings moved in, including reverting back to a shared bedroom for the first couple. The government might even consider an exorcism or spiritual cleansing to make sure the evil spirits are actually gone.

All I can say is that the last four years have been a rude awakening for America, one that we should not hastily place behind us.