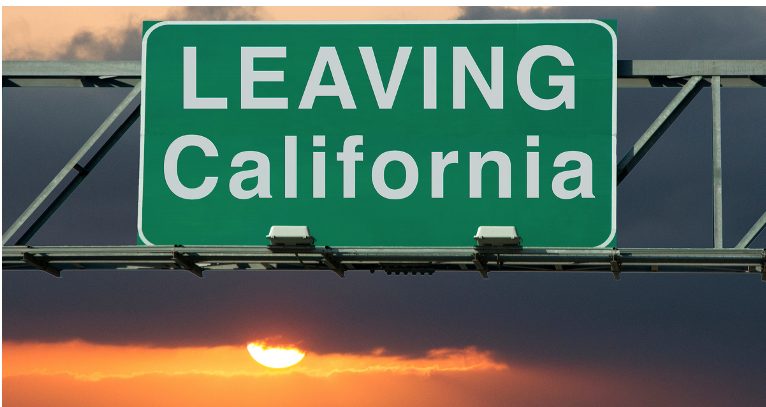 LEANING RIGHT--Everyone knows it (at least if they're from California) that Californians are smarter than Texans.

Everyone knows it (at least if they're from California) that Californians are more innovative and educated than Texans.

Everyone knows it (at least if they're from California) that Californians create more jobs, and enjoy better weather, than Texans.

Well, maybe the weather part is right (having lived in Texas for four years, I assure you that East Texas humidity is a toughie), but apparently something happened over the last few years to decades:

We've discovered that Californians, and not Texans, are the closed-minded Americans who really aren't so smart. Big Tech, as with defense, aerospace, and other manufacturing, has realized that Californians are pretty uneducated with respect to how to build an economy and livable state.

Water, electricity, suburbs to encourage families to survive and thrive for affordable housing, utility, and retirement...all goes to Texas.

Larry Ellison, co-founder of Oracle, is moving to the island of Lanai to enjoy paradise and his hotels, and is also moving his company to Texas because of high taxes.

Ditto for Elon Musk and Tesla. Mismanagement of San Francisco and the state of California made it very easy to move, particularly to the new tech hub of Austin.

Ditto as well for HP Enterprise.

Austin is pretty liberal, so the move to Austin probably isn't related to any desire to go with a conservative state or region.

But taxes, which keep going up, does sooner or later make people find the "unmitigated gall" to want to keep their hard-earned money.

And voters who are stupid enough to smash and thrash their police, and to elect George Gascón to ruin LA after he did it to San Francisco, and after helping the state pass state measures to emasculate statewide law enforcement, also have a peculiar way of making self-respecting citizens bail to where sanity rules the day.

For those who've ever picked up a book or two, it's an "Atlas Shrugged" kind of thing.

Because most educated and civilized people like to live where kindness and logic rule, and feelings are balanced with reality, science, and the benefits of learned experience.

And while it's to be noted that the words TAXES and TEXAS have similar spellings, it's also to be noted that Texas appears to be the new California, and for those who aren't landowners, retired civil servants, or trust-fund babies, the future does NOT appear to be too bright for California...

But at least we're smarter than Texans...or at least in the opinion of Californians who've never been to Texas.

Investing in Destruction: California Teachers Pension Money Should Not Be Funding Line 3