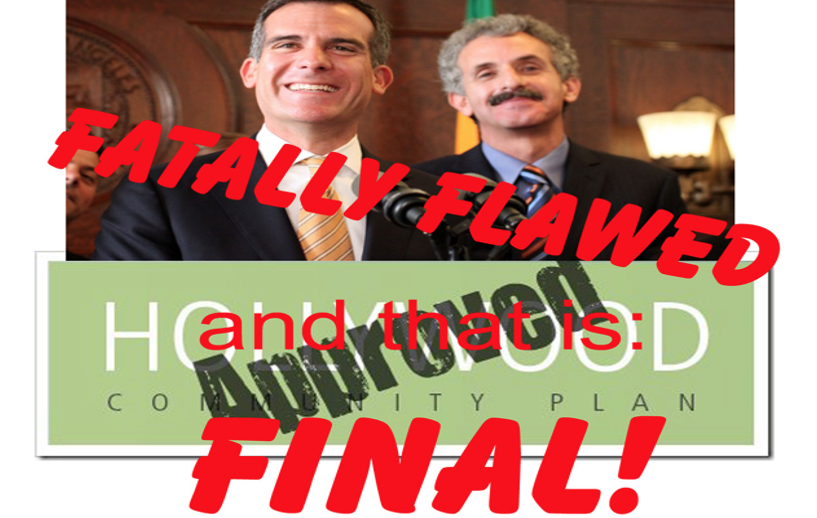 PLANNING WATCH-If you forgot that history repeats itself, first as tragedy and the second time as farce, you only need to look at City Hall’s repeated efforts to update the Hollywood Community Plan.

When the City Council adopted the 2012 Hollywood Update, I identified four other methodological flaws, all of which unfortunately apply to the new 2020 version.

That was tragedy, and now comes the farce.  On December 9, 2020, after eight years of continuous work to prepare another Hollywood Community Plan Update, LA City Planning will host a public meeting and hearing.  The hearing will consider public testimony regarding the new Community Plan text and map, appended zoning ordinances and a Community Plan Implementation Ordinance (CPIO), a Draft Environmental Impact Report (DEIR), and a partially recirculated Draft Environmental Impact Report.  The unasked question is whether City Planning has accurately responded to Judge Allan Goodman’s stunning rebuke of the previous Update.

Based on my review of the new 2020 Update, the answer is so far NO.  It repeats many of the same mistakes that sunk the 2012 Update.

I will credit the revised plan with generating an enormous amount of paper. The plan’s text weighs in at 136 pages, the Community Plan Implementation Ordinance (CPIO) at 95 pages, the zone-change ordinance at 96 pages, the Draft Environmental Impact Report at least 150 pages, the DEIR’s Appendices at 358 pages, and the Recirculated Environmental Impact Report an unknown number of pages since it is not posted on-line. While I could have missed something in these 700 plus pages, this is my preliminary analysis.

Outdated demographic data.  Here we go again. In 2021 the new Update will go before the City Planning Commission and the City Council, 11 years after the Bureau of the Census) collected its 2010 baseline census data. After that, in 2016 the Census extrapolated its 2010 data, which City Planning augmented with forecasts from the State Department of Finance and the Southern California Association of Governments (SCAG). Most tellingly, City Planning’s 2040 population forecast exceeds SCAG’s rosy 2040 forecast by 17,000 - 48,000 people. This growth forecast is dubbed “Reasonable Expected Development” even though LA‘s population, like Hollywood’s, is in decline.

Inadequate municipal services and infrastructure.  The new Draft Environmental Impact Report indicates there will not be any upgrades to Hollywood’s infrastructure, including upgraded water supply and electric power. The Update’s rationale is that new development will be located in areas of Hollywood that have spare infrastructure and service capacity. As for any data or monitoring program substantiating this bold claim, I could not find them.

Ignored Environmental impacts.  Every major project, like the updated Hollywood Community Plan, has serious environmental impacts, such as Green House Gas emissions, that can only be successfully mitigated by fundamentally redesigning the project. This is called an Environmentally Superior Alternative.  In this case, the DEIR labels this option the Reduced Transit Oriented Development and Corridors Alternative. Since the Update version that City Hall decision makers will consider in 2021 rejects this alternative, it will require a Statement of Overriding Considerations. This Statement does not yet appear to exist, but based on previous statements it will claim, without any verification, that the updated Community Plan generates so many additional jobs, low-income housing units, and/or transit trips that decision makers can safely ignore its adverse environmental impacts.

Improper sequencing.  Like the 2012 plan that Judge Goodman rejected, the current Hollywood Update also precedes antiquated General Plan elements. It makes frequent references to the 24-year-old General Plan Framework Element, while other relevant General Plan elements, particularly Infrastructure Systems and Public Facilities and Services, are 50 years old. City Hall should thoroughly update these relics before updating a Community Plan that the courts rejected because of inadequate infrastructure and public services.

Conflicts with the General Plan.  The current Update repeatedly claims that it consistent with the existing General Plan.  But this is hardly the case because the Framework is clearly growth neutral, not growth-inducing. It contains two criteria for ordinances that increased planned and zoned capacity. First, these proposals needed to demonstrate that existing zoning could not meet the need of future residents. As far as I could determine, neither the Updated Hollywood Plan nor its DEIR contained this information. Second, the proposal must also present clear evidence that LA’s infrastructure could meet the needs of additional people and building. While the Update makes these claims, I could not find any supportive data.

Conflicts with zoning build out. The Update implies that Hollywood’s existing zoning is inadequate to meet user demand, and therefore it, therefore, presents an extensive program of up-zoning. But Hollywood has plenty of underutilized zoning, mostly commercial lots on transit corridors that are suitable for by-right apartment buildings. In fact, Hollywood’s existing zoning allows its population to double, reaching 470,000 people. This is 264,000 more people than SCAG’s 2040 population forecast, repeatedly cited in the Update. If Accessory Dwelling Units and Density Bonus are then factored in, Hollywood’s population could reach 630,000 people. This is 426,000 more people than SCAG’s 2040 forecast or 2040, and 366,000 more people than City Planning’s 2040 Reasonable Expected Development population forecast.

Clearly, Hollywood does not have a shortage of existing parcels available for all population growth scenarios. There is no reason for the Update to include a 96 page up-zoning ordinance and a companion 95 page Community Plan Implementation Ordinance for even more up-zoning.

Failure to monitor the Update. The General Plan Framework, so frequently referenced in the current Update, requires City Planning to establish a General Plan Monitoring Unit.  Once established, this unit would prepare and distribute annual General Plan monitoring reports. Without these reports, there is no way to determine if the Update’s 146 implementation programs actually exist or if they successfully meet the Update’s goals. Furthermore, the Update is based on assumptions about increases in population, housing, employment. Without monitoring, it is impossible to know if these demographic assumptions are correct or if they should be adjusted, along with the Update’s implementation programs.

(Dick Plakin is a former Los Angeles city planner who reports on local planning issues for CityWatch.  He serves on the board of United Neighborhoods for Los Angeles (UN4LA) and co-chair of the new Greater Fairfax Residents Association. Previous columns are available at the CityWatch archives and https://plan-itlosangeles.blogspot.com/. Please send corrections to [email protected].) Prepped for CityWatch by Linda Abrams.