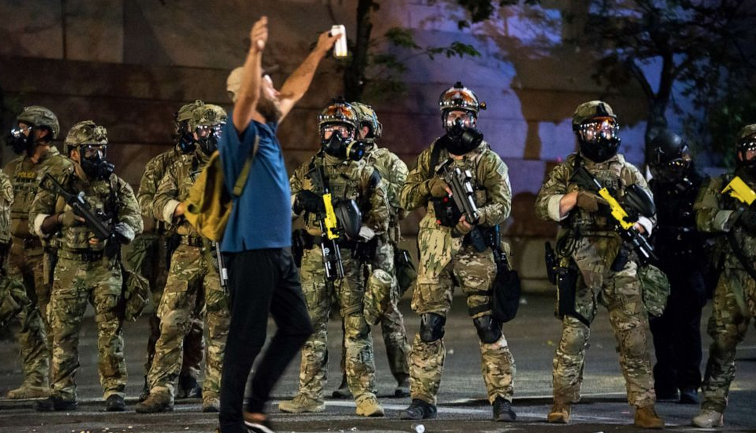 AMERICAN PROTEST-Despite pre-election plywood covering store fronts in cities across the United States, it was total fearmongering that far right militias, Black Lives Matter, or Antifa would initiate street violence during or after the November 3 presidential election.

Why? We clearly know who are the major purveyors of violence in the United State, especially who has the guns and military equipment, extensive training, and uses them every day to attack and often kill people in the United States and  other countries. It is not the far-right militias, Black Lives Matter, or Antifa. Instead, it is local and federal police departments and the country’s military.

First, the largest armed group in the United States is the country’s military. They have an annual budget of at least $750 billion, with another $400 billion scattered among other federal agencies and departments. They have about 500 domestic military installations and control 800 foreign military bases. At present the United States government is engaged in nine foreign wars, and whenever there is a serious domestic rebellion, presidents routinely order the country’s military to enter cities like Detroit and Los Angeles to suppress civil disturbances.

Furthermore, a branch of the armed forces, the National Guard, has trained units in Alabama and Utah ready to instantly deploy to any part of the United States to quell new civil disturbances.

Second, there are nearly 15,000 police departments in the United State and  least 75 percent of them have SWAT teams trained in commando operations and bestowed more military equipment than they can use. They engage in over 100,000 quasi-military operations every year, and in May-July 2020 these SWAT teams were widely used to quell demonstrations opposing excessive police violence over the entire United States.

Third, the FBI has 52 field offices, and each office has a trained, heavily armed SWAT team of at least 42 people. Like U.S. Marshalls and ICE officers, they can be instantly deployed to oppose street demonstrations, as they recently were in Washington, DC and Portland, Oregon.

Fourth, these groups are connected through Fusion centers and other administrative mechanisms to operationally link them together to suppress mass movements, like Occupy and Black Lives Matter.  Their tools include drones, spy planes, and mass surveillance.

Fifth, the FBI has made it clear that the main domestic terrorist threat in the United States (ignoring the 1000 people per year that the police murder) comes from Alt Right white supremacists, not unarmed mass movements, like Black Lives Matter (BLM).

The latter is a protest organization with a nationalist outlook, with no military component, but extensive support from large, social justice philanthropies (e.g., Ford Foundation). While BLM and the sympathy demonstrations it sparked in June 2020 could not prevent organized criminals, undercover cops, provocateurs, and deranged people from showing up, BLM does not recruit, organize, or train these opportunists.

Sixth, Antifa is not even an organization; it is a loose 80-year-old alliance of local anti-fascist individuals and informal small groups that coalesce to confront fascist groups when they initiate violence. Also, there is no connection between Antifa and Black Lives Matter. They are rarely at the same events and neither group engages in electoral politics.

Too bad so many trees had to needlessly die for all that plywood.

(Victor Rothman is a California-based political analyst.) Prepped for CityWatch by Linda Abrams.