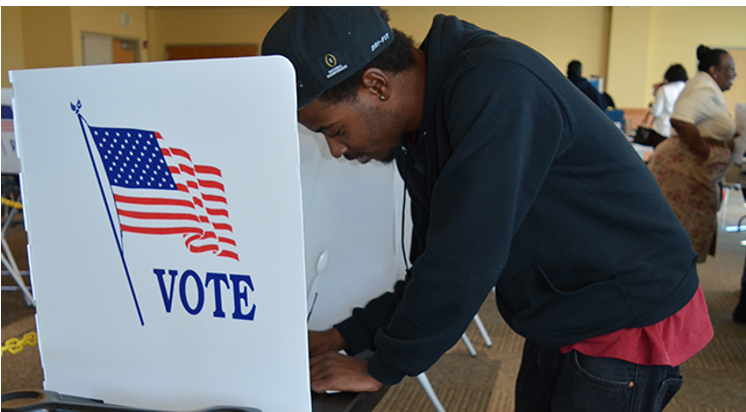 VIEW FROM HERE-Laboring under the misapprehension that America is a democracy, a majority of Americans believe that the majority rules.

Thus, the notion that whoever gets 50% plus one (1) vote gets to do whatever they desire.  This belief is totally false.

The nation’s founding document is the Declaration of Independence.  As Abraham Lincoln knew the Declaration’s inalienable rights embodied America’s soul.

“That to secure these (inalienable) rights, governments are instituted among men, deriving their just powers from the consent of the governed.”

The above sentence also links inalienable rights to voting.  Unless and until we devise some other objective way to determine consent of the governed other than voting, the Republic will rely on elections.  Due to the role which voting plays in securing each person’s inalienable rights, we are a Federal (Federated) Democratic Republic.  We should take heed that “Republic” is the noun and “Democratic” is but a mere adjective.  Voting does not turn us into a democracy.

All these politicos who have been calling us a “democracy” either mean our nation ill or are unaware of our origins.  In a democracy where the majority vote of the people is the law of the land, a tyrant need only capture the passion of the majority and then banish dissent.  That is Trump’s way, except in his addled mind he does not need a majority vote. He merely needs to claim he won.

Please, Do Not Confuse a Majority Vote’s Determining the Outcome of an Election with the Consent of the People.

Americans are so intoxicated by the false idea that we are a Democracy where the majority may do whatever its passions dictate that we fail to realize that the “consent of the governed” is not the same as “will of the majority.” The “will of majority” decides who wins a political seat but whoever assumes that position has to heed the “consent of the governed” which is a far larger group extending beyond members of the winning political party.

Joe Biden Has Been Loyal to this Crucial Aspect of America

When he says he is President for all Americans, he recognizes that close to one-half the country does not endorse all positions taken by the Dems.  President Biden has to govern from the center because that is where one finds the consent of the governed.  America has no consensus that White Supremacy should rule, and there no consensus that ersatz socialism of the far Left should be imposed.  Both extremes have placed themselves outside the boundaries of the consent of the governed.

Fox’s reality-mangling pundits have been a financial boon to the Left.  Would left leaning MSNBC exist without right leaning Fox?  They both began in 1996 after CNN, founded in 1980, showed gigantic ratings ($$$) with its coverage of The Persian War in 1991, surpassing all network news divisions.   It should be no surprise that after 1996, we had a media to the right, a media to the left and CNN which was accused by some as being too liberal and by others as too conservative.  If a pure communist agenda had sold TV ads, Fox’s Roger Ailes (appointed to Fox News in 1996) would have interrupted his sexual harassment regime to promote Karl Marx.  Ailes was worth about $100 M in 2016 when sexual harassment claims forced him to step down from Fox.

Consent based on fraud is not consent.  The economic system rests on the foundation that what is sold is what it is represented to be and the money to purchase it is not counterfeit.  Political consent, likewise, cannot be based on fraud.  Yet, much of it is.  That presents a conundrum for governance.

Trump’s blatant falsehoods about Coronavirus’ going away and that real men don’t wear masks resulted in consent on the right wing that the pandemic was a hoax designed to destroy the economy so Trump would not be re-elected.  Now, facts are showing how lack of social distancing and masks are ravaging Trumplandia.  (Mayor Eric Garcetti’s LA has similar problem.  Due to his excessive densification coupled with his refusal to upgrade the telecommunications system, Safer at Home became Poverty at Home.)

Biden’s first move is to address the Pandemic – and that decision is rooted in the Declaration. Biden needs to obtain the consent of the governed and the first step is to calmly but firmly place science as the only way to protect the American people and to restore the economy.  Screaming “Lock Trump up” will destroy consent.  Contrary to some on the Left, people right of center are not fools.  If we stop blaming white people for all the world’s ills, and address today’s real problems so that we may jointly make life better for all, Biden can put together a centrist coalition – whether Mitch McConnell likes it or not.

The Consent of the Governed Lives in the Center

Like a ship’s ballast, the nation’s center shifts to and fro to keep the ship on an even keel.  The larger the center, the less likely a wave from the right or left can swamp the ship.  Biden’s job is not to make nice with GOP senators, albeit he may do that, but to promote programs which help all Americans.  Black Lives Matter strikes me as one of his foremost allies.  When they call for systemic change, they are not engaging in personality or race-based cultism. Any system where Black people’s lives matter will not be a predatory system.  One may further opine that the Black population is quintessentially American.  Due to horrid treatment, much of their African heritage was decimated and the culture(s) which they have today, they themselves forged here including the reclaiming of African roots.  Thus, the line from Jefferson, to Lincoln, to MLK to BLM should surprise no one.  Like BLM, The Declaration called for systemic change – not for a new king. Joe Biden knows that!