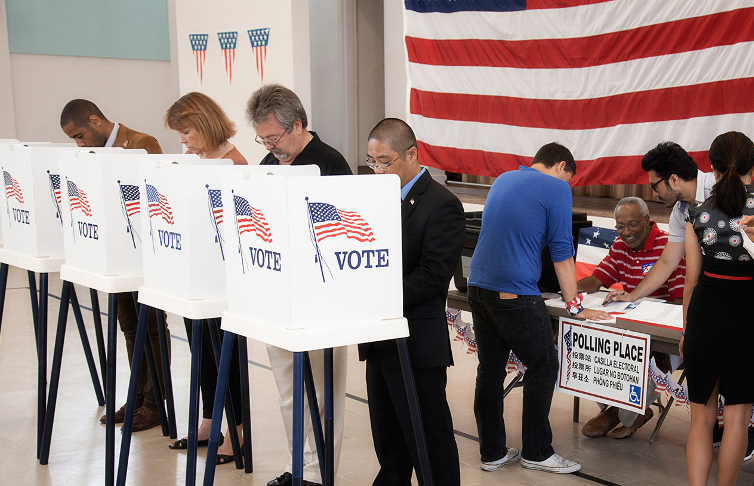 VIEW FROM HERE--While we love to flatter ourselves by intoning inane platitudes, the two greatest dangers for America are Faith and Democracy run amuck.

When the Founding Fathers shunned a monarchy and a democracy for the new nation and instead devised a republic, they knew it was a perilous undertaking.  Constitution’s Preamble set forth its goals.

“We the People of the United States, in Order to form a more perfect Union, establish Justice, insure domestic Tranquility, provide for the common defense, promote the general Welfare, and secure the Blessings of Liberty to ourselves and our Posterity, do ordain and establish this Constitution for the United States of America.”

Our first motto, E Pluribus Unum, reflected the Preamble’s first purpose, i.e. a single nation from many peoples.   Because each individual has inalienable rights, the government’s function is to help us all actualize our individual rights to Life, Liberty and the Pursuit of Happiness by coming together in cooperation.  Many people are shocked and refuse to believe that a founding purpose of the nation was to “promote the general welfare.”

In the 1950's we took giant steps away from our founding principles of individual inalienable rights, justice and liberty in favor of a divisive Us v Them mentality.  No longer were we a nation where religious liberty including the right to have no religion was a corner stone of Liberty. In derogation of the First Amendment, after 1954 we had to pledge allegiance to “one nation under god.”   In 1956 we changed our official motto to “In God We Trust.”  In the depth of the Cold War and the McCarthy Era, mobocracy seized control, and perverted America into an intolerant Us v Them nation.   Donald Trump is Sen. Joe McCarthy’s heir.

Like Sen. Joe McCarthy’s witch hunt to find communists in the US government, his reign came after many others had primed the public to foolishly see America as a Us v Them proposition: Christians against godless Communists, many of whom were American Jews.  The House Committee on Un-American Activities [HUAC], which began in 1938 as the Dies Committee, assumed its new name in 1944.  In 1950, the US Senate formed Senate Internal Security Subcommittee (SISS), which became Sen. McCarthy forum to sow the seeds of a paranoia and division among Americans.  The reality was that our constitutional rights of free speech coupled with the inalienable rights of Life, Liberty and the Pursuit of Happiness made Communism no threat on American soil, but divisiveness is a good method for unsavory politicos to gain control. Charlatans always benefit from turning the populace against itself. The passion of faith replaces facts and reason.

The downfall of divisive Joe McCarthy did not end America’s departure from the Declaration’s formula that Life plus Liberty equals Pursuit of happiness.  In Brown v. Board of Education, 347 U.S. 483 (1954), the US Supreme Court denied to Blacks the inalienable right to liberty by its failure to simply rule, “Segregation is per se unconstitutional as a deprivation of Liberty.”  Instead, it adopted Equality of Results. Segregation was illegal only because Blacks did worse in segregated schools.

Two decades later in Roe v. Wade, 410 U.S. 113 (1973), the US Supreme Court affirmed the inalienable right of privacy for White women.  (The right of privacy is part of Liberty) The Pro-Choice Movement was essentially a White crusade which began with Griswald v Connecticut 381 U.S. 479 (1965), because Connecticut law did not permit women to use contraceptives.

In striking down Connecticut’s anti-contraception law, one needs to realize that while Brown v Bd of Education had rejected Justice Harlan’s dissent in Plessy s Ferguson, (1896) 163 U.S. 537 which said segregation deprived people of Liberty, when it came to a White woman’s crusade, the court relied on Liberty as stated by Justice Harlan’s grandson’s, John Marshall Harlan II,  in Poe v Ullman 367 U.S. 497 (1961)

“(T)he full scope of the liberty . . . is not a series of isolated points pricked out in terms of the taking of property; the freedom of speech, press, and religion; the right to keep and bear arms in the United States; the freedom from unreasonable searches and seizures; and so on. It is a rational continuum which, broadly speaking, includes a freedom from all substantial arbitrary impositions and purposeless restraints.”

As later developments like the 1977 Hyde Amendment showed, the Pro-Choice Movement, which was based on the inalienable right of Liberty, did not really extend to poor Black women.

Since the 1954, America has continually embraced the US v Them mentality while also denigrating the inalienable and constitution right of Liberty.  The Alt Right not only wants to overturn Roe v Wade, but they want to overturn Gay Marriage and return America to the mid 1950's where Christian religiosity becomes law.  In 2015, the California Supreme Court endorsed the notion that California judges have the state constitutional right to exclude troublemaker Jews who would refuse Jesus Christ from hearings and state court judges may alter evidence offered by Jews.

Trump Did Not Cause Divisiveness in America

Group Rights, Identity Politics, divisiveness is a remnant of our European past where Group Rights resulted in centuries of war.  The Declaration adopted individual inalienable rights to protect us from such divisiveness. The Constitution made “securing blessings of Liberty” one of its purposes, the Bill of Rights set forth some of the specific rights, and our first motto envisioned multitudes of peoples coming together to form a more perfect Union. Federalist Paper #10 further describes the dangers of factions, but today Liberty is under attack from both the Right and the Left in favor of promoting their own power bases.  Cooperation with others is treason and faithfulness to one’s group is all important.

Americans no longer vote to participate with their neighbors to elect learned and prudent leaders, but rather they vote for total control in order to vanquish the evil foe.   Over the past six decades, We the People set the stage of divisiveness, and a mentally ill buffoon has assumed the leading role.