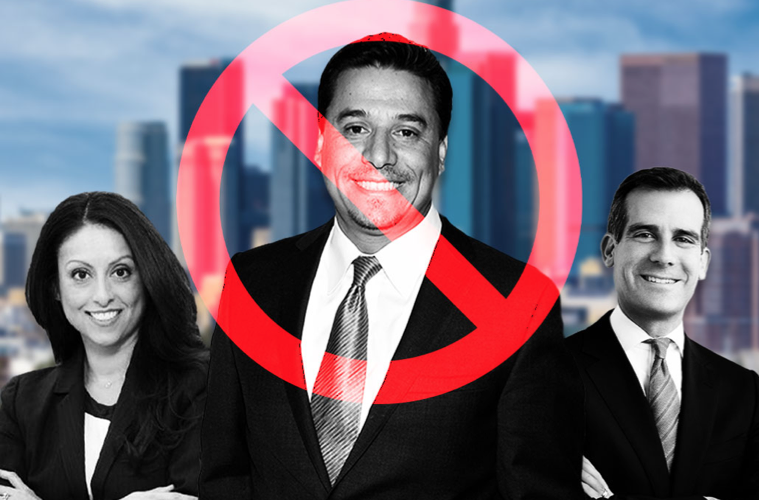 @THE GUSS REPORT-It is restorative to watch LA City Council and its political peers twist like pretzels to disingenuously distance themselves from corrupt pals seemingly headed toward federal prison.

Martinez controls the Council agenda both in a broad political sense as well as the written agendas that layout the issues for each meeting. While she is the body’s face and public voice, she has run away from explaining this public misrepresentation on those written agendas.

Multiple City Hall sources point to City Charter section 207, which lists the reasons why an elected official might be removed from office. None of them describe the Huizar’s situation in the wake of the federal indictment to which he pleaded not guilty on Monday.

An office becomes vacant when:

(a).  the incumbent dies, retires, resigns, is adjudged insane, pleads guilty or no contest to or is convicted of a felony, is removed from office or fails to qualify within ten days from the time he or she receives his or her certificate of election or appointment;

(c)   the incumbent is convicted of an offense involving a violation of official duties, including, without limitation, a violation of the conflict of interest and government ethics provisions of the Charter or City ordinances.  However, removal from office for violating conflict of interest or governmental ethics provisions shall be required only if a court determines that the seriousness of the offense and degree of culpability of the officer so warrant;

(e)   the incumbent of an elected office, or the Chief of Police has ceased to discharge the duties of the office for 90 consecutive days, except when prevented by illness, injury, or other reasonable cause; or

(f)   the incumbent of an elected office, or the Chief of Police is found by a court to be incapacitated according to the criteria contained in Section 208.

On June 23, Martinez filed a Motion to suspend Huizar from office, citing Charter section 211, which says “Pending trial, the Council may suspend any elected officer, and the appointing power may suspend any appointed officer, against whom felony criminal proceedings, or criminal misdemeanor proceedings related to a violation of official duties as described in Section 207(c).”

Huizar’s suspension from his elected office doesn’t mean he has been removed from it. And Section 207(c) doesn’t apply because no court made such a finding.

But let’s face it. At minimum, Council is doing this because it enabled Huizar’s corruption by what is known as vote trading. The City’s Planning and Land Use Management (PLUM) Committee, which Huizar chaired until his universe collapsed with the 2018 FBI raids, received scores of their unanimous aye votes. Whatever Huizar sent their way was blindly approved by virtually every councilmember, virtually every time.

Whenever Huizar put up real estate development recommendations for City Council votes, especially with “nudges” from then-Council president Herb Wesson, they were unanimously approved thanks in part to software which automatically tallies an aye vote unless a councilmember proactively votes no.

None of them has moved to cease using that software.

Each councilmember took a sworn oath to carefully consider their official actions, including every single vote they cast. But they didn’t do that and are now on the hook for every corrupt deal they approved, knowingly or not.

Voting trading happens because that’s the universe that Martinez and her predecessors Wesson and Eric Garcetti chose to enable. If you want the Council to unanimously approve votes for agenda items from your Committee, it is expected for you to consistently vote aye for theirs.

They may play dumb, but they’re not stupid.

“The tip that triggered the investigation into the largest alleged collegiate entrance scam ever prosecuted came from a financial executive's last-ditch effort to squirm out of the crosshairs of federal authorities, a law enforcement official tells CNN.”

Huizar is now in a last-ditch effort of his own to squirm out of the crosshairs of federal authorities. He has been in public office continuously since April 2001.That’s a mighty long time to make notes. And only a fool would believe that he didn’t.