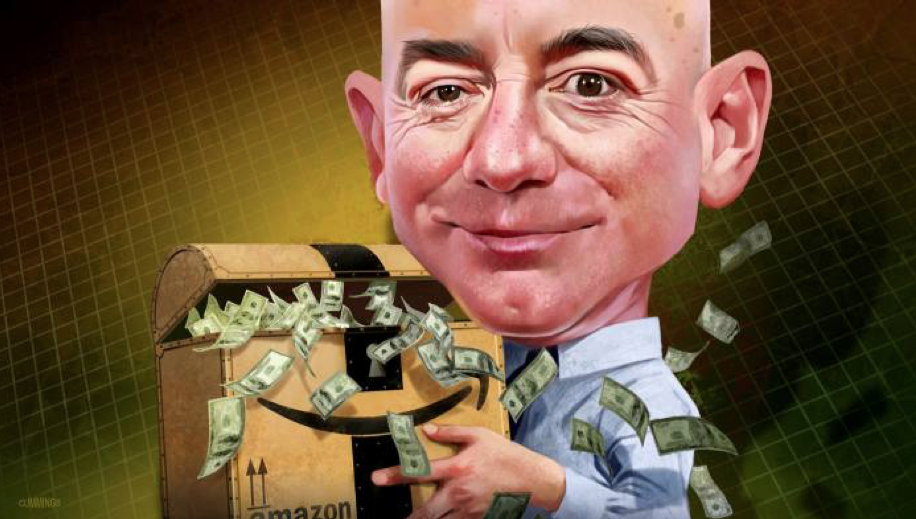 BE WARNED!--Six months into a global pandemic, the US economy just took its most grievous hit on record, while Amazon, Apple, Google, and Facebook only added wealth.

In just three months, April through June, so many workers were furloughed, laid off or forced to work and school from home, that the economy shriveled by 32.9% or almost a third. While the US was tanking, Amazon's share price rose by half, and Facebook's growth rate approached 60%. (Graphic above: Jeff Bezos)

If we think inequality was bad before Covid-19, it's about to get a whole lot worse as more small and mid-size companies crash and the biggest soak up what's left.

What does consolidated power look like? A Congressional antitrust committee has been investigating the big tech firms for more than a year, and, recently, members laid out their findings while tongue lashing the chief executives.

When Facebook fancied purchasing Instagram, we heard, the company threatened to clone and ruin its online competitor if its owners held out.

Seeking to dominate the diaper market, Amazon bled $200 million to undercut Diapers.com. Immediately after killing them off, Amazon jacked up the price. Now, in her district, the lines for diapers at the food pantries are second only to the lines for food, reported Rep. Mary Gay Scanlon of Pennsylvania.

That's what it looks like when a few can shake down, strangle, and extort our economy. But those aren't management tactics, they're mob rule, and now is the moment we either take on the mob or perish.

Can we regulate our way out of this level of inequality? Tax the spoils, perhaps? Jeff Bezos' wealth apparently grew by $11 million while he sat before Congress mumbling at his desk. Even if it were possible for our valiant antitrust legislators to survive and win congressional support, it's going to take more than a raft of new rules or a tweak of the tax code to tackle this sort of runaway power and compound growth.

The US failure to control the virus is shaking our economy to the core. Only massive government payouts stopped the bottom dropping out. Those payouts are expiring. If the behemoths are where the money is, why not take them over in the public interest? Make the big four into public utilities and use the revenues to house and heal people and create a more democratic economy while we're at it.

You can watch a discussion of Big Tech's threat and promise at http://www.lauraflanders.org, and sign up there for our newsletter, or subscribe to our podcast. Thanks.

(Laura Flanders interviews forward-thinking people about the key questions of our time on The Laura Flanders Show, a nationally syndicated radio and television program also available as a podcast. A contributing writer to The Nation, Flanders is also the author of six books, including The New York Times best-seller, BUSHWOMEN: Tales of a Cynical Species.  She is the recipient of a 2019 Izzy Award for excellence in independent journalism, the Pat Mitchell Lifetime Achievement Award for advancing women’s and girls’ visibility in media and a 2020 Lannan Cultural Freedom Fellowship for her reporting and advocacy for public media. lauraflanders.org. Posted first at CommonDreams.org.)