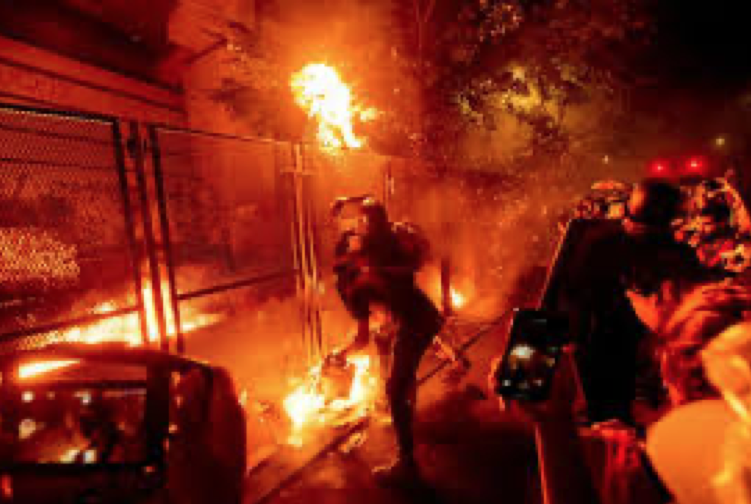 ALPERN AT LARGE--When even the family of George Floyd and the families of K-12 students are calling for an end to chaos, and a restoration of work, the economy, and school--

and certainly an end to violence--how long SHOULD we turn the other way and pretend that things aren't moving beyond civil rights and liberalism and are unraveling into left-wing havoc and even fascism?

With the death of civil rights icon John Lewis, who was part of a peaceful movement for civil rights that captured the hearts and minds of the nation, we now have a new era of violent looters that the rightful protestors are not distancing, and who are destroying private and public property.

Federal property is under the protection of federal agencies and federal enforcers, and is property that our taxes all paid for, so is it really acceptable for "civil rights" looters to trash federal buildings?

Most of the looters and violent, bomb and firework-hurling, business-trashing, and assaulting troublemakers are NOT black but are white. Their organization and funding are highly suspect, and of cause for great concern.

2) So which is worse, that the rioters are rioting, or that they're being enabled by our own Mayor Garcetti, who is standing with "our friends in Portland" and that they "represent the best of our democratic ideals"?

Are the rioters and violence-prone agitators really fighting for civil rights, or are they promoting a left-wing, fascist, violent overthrow of the American government?

And by not denouncing, or even supporting such strife, are we seeing a new Confederacy who will take on our current United States of America?

4) It's easy to suggest that this is all part of "The Resistance" against Donald Trump, but any time that the mayors who have promoted, enabled, or allowed this rioting have met with the always-angry, always-furious protestors, they've been scorned and even attacked.

And as the mayor of Oakland learned, even their own homes are not above vandalism and terrorist behavior.

5) Meanwhile, despite the CDC now echoing the calls of California Governor Newsom and President Trump to ONLY open the schools when they're safe to do so we're getting a series of demands by the United Teachers of Los Angeles (UTLA) for the following for the LAUSD's schools to open:

It's not hard for anyone reasonable to conclude that the UTLA, which has clearly gotten too big for everyone's good, is making demands that have NOTHING to do with what's good for the students of the LAUSD, and of course those students' parents and the taxpaying citizens in general.

The ban on charter schools is clearly a power grab, and the best argument of all to either break up the LAUSD, encourage MORE school choice, or to create MORE charter schools.

So, here's a few thoughts, Mayor Garcetti, when we need strong, courageous, and patriotic leadership more than ever:

1) Distinguish between the peaceful protestors and the rioters, Mr. Mayor, and support the former while rebuking the latter, and in no uncertain terms...because they ARE coming to Los Angeles, sooner or later. Hoping that they'll spare L.A. because we're "tolerant" of the rioters will NOT appease them.

2) If you continue to abandon and undermine the LAPD after many years of community policing, then perhaps it's time to ask them to no longer ask this "violent LAPD occupying force" to no longer serve as your own security detail, Mr. Mayor.

3) Decry any overreach of the UTLA because they are trying to supplant you as the governing body of the City of Los Angeles. And considering how the taxpaying public rejected measures for increasing the funding of the LAUSD, particularly after their recent strike, the UTLA makes a pretty good target...because they're targeting YOU, Mr. Mayor, and the rest of us, to boot.

Maybe it's unfair, and maybe it's not, to blame so much of this on one person--Mayor Garcetti--but what are the rest of us law-abiding citizens to do? Take matters in our own hands?

(CityWatch Columnist, Kenneth S. Alpern, M.D, is a dermatologist who has served in clinics in Los Angeles, Orange, and Riverside Counties, and is a proud husband and father to two cherished children and a wonderful wife. He was termed out of the Mar Vista Community Council (MVCC) twice after two stints as a Board member for 8-9 years and is also a Westside Village Zone Director. He previously co-chaired its Outreach and Planning Committees, and currently is Co-Chair of its MVCC Transportation/Infrastructure Committee and Vice-Chair. He was co-chair of the CD11 Transportation Advisory Committee and chaired the nonprofit Transit Coalition and can be reached at [email protected]. He also co-chairs the grassroots Friends of the Green Line at www.fogl.us. The views expressed in this article are solely those of Dr. Alpern.)