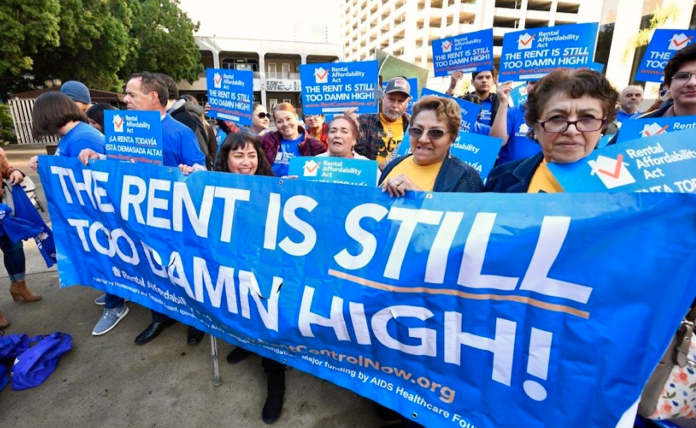 EYES ON THE STREET-From California to New York, the news has not been good. Millions losing their jobs and facing eviction.

Unaffordable rents in every state in the nation. Homelessness surging in the suburbs. If there was ever a time for a nationwide movement to protect renters — fixed-income seniors and single mothers, recent college graduates and teachers — now is that time.

One movement is already underway — in California, the most populous state in the country. It’s rallying around a November ballot measure called Proposition 21. U.S. Senator Bernie Sanders backs it. Labor and civil rights icon Dolores Huerta supports it. Congresswoman Maxine Waters and the Rev. Al Sharpton are all in. The National Urban League, UNITE HERE Local 11, the city of Santa Monica, AIDS Healthcare Foundation, and the Eviction Defense Network have also lined up behind it — with no reservations.

Prop 21 allows communities to expand rent control policies and place sensible limits on the unfair, sky-high rents that have been plaguing Californians for years. The ballot measure isn’t looking for handouts, and it’s not trying to punish anyone — by law, in California, landlords must make a fair rate of return. What Prop 21 is doing is leveling the playing field, and fixing a broken rental housing market. Perhaps more than anything, Proposition 21 seeks to bring fairness to California.

Prop 21 follows in the righteous tradition of what Dr. Martin Luther King Jr. talked about in 1968: “The arc of the moral universe is long, but it bends toward justice.” Like civil rights or environmental justice protections or LGBT rights, Prop 21 is, once and for all, addressing a long, festering problem that’s harmed the have-nots while maintaining power (and riches) for the haves.

No longer will the Barons of Big Real Estate, such as billionaire landlords Sam Zell and Geoffrey Palmer, be allowed to enrich themselves while soaking the rest of us by charging unfair, sky-high rents. No longer will corporate landlord greed fuel a housing affordability crisis that’s triggered a worsening homelessness crisis. No longer will predatory landlords squeeze every last dollar out of working-class parents who have to choose between paying the rent and buying medications for their kids. Prop 21 bends the arc of the moral universe towards justice. It can’t be more clear.

But Big Real Estate doesn’t want Californians to see Proposition 21 that way. The California Apartment Association, the landlord powerhouse that for years has fought tooth and nail to stop any kind of renter protection anywhere in California, will spend millions to smear, disparage, and discredit Prop 21.

That’s what the haves do when backed into a corner, knowing that truth, fairness, and justice are not on their side. They’ll stoop low and lower to keep a status quo that’s made them billions — and made off the backs of the have-nots. In Los Angeles County, over the past decade, tenants paid $345.9 billion in rent. In San Francisco, tenants shelled out $141.1 billion. In San Diego, tenants forked over $86.2 billion to landlords.

In the meantime, UCLA predicts 350,000 evictions could take place in Los Angeles County because people, slammed financially by the COVID-19 pandemic, don’t have the money to pay sky-high rents. Homelessness is going through the roof in the Bay Area also because of the pandemic. And California, driven by sky-rocketing rents, is home to five of the 20 most gentrified cities in the U.S. Many experts believe things will only get worse — but that’s if nothing changes, if solutions like Proposition 21 aren’t implemented.

Last year, I visited Rafael Bautista in San Diego. He’s one of the founding members of San Diego Tenants United, a tenants rights group. Bautista had seen sky-high rents and predatory practices by developers and landlords tear apart working-class communities — and local politicians, many of whom are in the pockets of the real estate industry, stood by and did nothing.

“To them,” Bautista told me, “we’re just numbers on the spreadsheet.”

I went back to him in April, a few weeks after the COVID-19 pandemic hit. I wanted to hear how things were going. The news wasn’t good.

“People have been unemployed for weeks and unemployment checks are not coming in with the slow unemployment insurance process,” Bautista said. “Federal checks are not going to be received for another few weeks, and not everyone will receive those funds. The system has failed us, and if nothing changes, hundreds of thousands of unemployed tenants will have little to no option but to skip rent to survive.”

He added, “Tenants are facing a real life struggle between paying rent and paying for food and medications. The coronavirus has made it abundantly clear that working people deserve more, but are still the last priority for this government.”

Bautista and San Diego Tenants United are early endorsers of Proposition 21. The ballot measure, and the statewide movement that’s rising up behind it, is one way to finally get some justice. Big Real Estate is scared silly. They don’t want other movements, seeking fairness and justice in other states, to get any ideas from California and rise up, too. As goes California, so goes the nation.

(“Eyes on the Street” is a regular column by Patrick Range McDonald, an award-winning reporter and advocacy journalist for Housing Is A Human Right. McDonald is a CityWatch contributor.)

When the LAPD Showed Up at My House. . .Twice in Two Weeks

LA’s Separation Incentive Program and How to Blow $250 Million