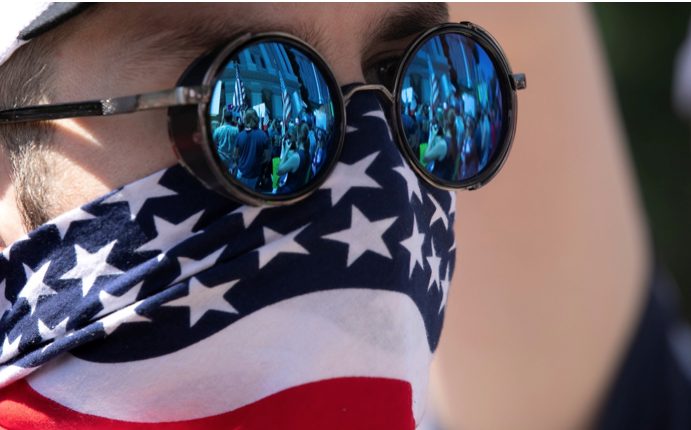 KEVIN’S CORNER-Here’s a look at five inconsistencies in our "polito-sphere" in 2020, both on the Left. . .and on the Right.

This piece, akin to, "What's good for the goose, is good for the gander," highlights some current socio-economic-political issues. Sometimes, the ever-so-faithful media (from both sides of the aisle), "accidently" omits nuances which if included in the discussion, could alter/add/improve our current narratives. "More knowledge, more power," I assume.

In the era of coronavirus, the majority of the country's people, especially the "experts," are in favor of wearing masks. Although there is still debate concerning the efficacy of these "corona-coverings," most agree that some kind of barrier is better than nothing to mitigate the spread of contagion. In fact, here's something that may not be widely known, a "fun fact," if you will: The cloth masks are not very effective in preventing the wearer from coronavirus.

(Say what??) Rather, the common cloth masks mostly prevent small liquid droplets from leaving the wearer's mouth/face area. This mitigation avenue is important, especially indoors, because simply put, the less "human aerosols" in the air, the less chance of someone else inhaling them. When folks don't wear masks, we often find mask-shaming. It has been seen in videos in supermarkets,  restaurants (for take-out), gas stations, etc.

However, one event which got a lot of pushback and shaming was the Trump campaign rally in Tulsa, Oklahoma three weeks ago.

And I think the push back was righteous because it was indoors where people were very close together. That said, there is one thing the media (and people in general) were given an exceptional pass to -- the protests in the past two months.

Although some protestors wore masks, clearly others did not. Furthermore, the riots, looting, and "statue tear-down functions" were indeed very "maskless." Not to mention, there was no social distancing. Yet, the media ignored this and sometimes even spoke of it in a positive light. Our "experts" have concluded these actions also contributed to coronavirus spread.

Recently, on CNN, Black actor, Terry Crews, called to our attention that the majority of people of color in this country are not being killed by police, but rather, by other citizens who happen to be criminals. The vast majority of those lives that are wiped out deserve national media recognition, at the least; at the most, they deserve to have huge rallies held in their honor.

I'm sure I stand with many in thinking that a group such as BLM, with so much funding, fame, social media attention, social connections, and "people power" could help make a dent in the horrible number numbers of shootings in so many American cities each weekend. By the way, parents of some of the victims have asked BLM leaders to call attention to this glaring problem, Yet, to my knowledge, we have yet to hear a response from the group.

Gimme me a Break!

Now we move to a couple righteous left-leaning gripes. As I write this on Tax Day 2020, I think it would be appropriate to call out something "capitalism-related." First, although this is a controversial statement these days, I believe capitalism seems to be the best way of exchanging goods and services in our current global, interconnected economy. In fact, many have argued that it has helped more people get out of poverty than enabled people to be in poverty. That will be of further discussion. I'd also like to point out that progressive policies too, such as social security and unemployment benefits, are a positive thing. Getting back to capitalism, yes, I said it was generally good. But, hyper capitalism, uber-capitalism (not the ride-share company) as some call it. . .is not good. Why?

The super-rich have advantages and privileges that the non-super-rich do not. They can hide wealth in offshore accounts. They can use tax loopholes to pay next to nothing in taxes, and as a matter of fact, some huge corporations are able to pay nothing in taxes. Third, there is often a difference between the punishments for blue-collar crime and white-collar crime. Let's just say, I don't believe any of the CEOs in charge of the reckless money-meltdown crisis of 2008 saw jail time. That is simply not fair.

The Unmasking of Trump

All of President Trump's health advisors say wearing a mask is the right thing to do if around people, indoors or outdoors. Trump has even said at various times that masks are great things in these Corona times. But how often do we see the President wearing one? The answer would be. . .never.  Shocking. Well, never. . .until just recently, when he wore a rather fashionable (yes) official presidential mask when visiting the sick at a federal hospital. Hopefully, indeed, he will see that wearing the mask is not too inconvenient, and, fingers crossed, we'll be seeing him masked more in the future, for his health and the health of others.

I'll say again, I support the protests, as long as they're not violent and while maintaining a good sense of, may I say, "corona consciousness." It almost goes without saying that the majority of Americans do not support looting, arson, terrorizing citizens, and pulling down statues and monuments. So, I'd hereby like to call out a glaring double standard in the media. Pretend for a moment that a group of unmasked people were roaming around, tearing down statues, and spray-painting terrible things on them, while yelling, "We support Trump!" This is almost laughable, and because it's almost laughable, does that say something else? Anyway, my guess is the likes of CNN, MSNBC, Washington Post, and The New York Times would be running that story nearly 24/7, in an absolutely "triggered" way.

However, in the case of the "demonstrators" who subscribed to the "Burn It Down" theory of political discourse, the media treated them with kid gloves, and in some cases, publicly condoned it. As an important footnote, most who have destroyed federal monuments have been found and arrested. An executive order has been passed stating that any person destroying federal property of this nature would you get a max of 10 years in prison. Ouch.

(Kevin Suscavage worked as staff with the CA Assembly, originated the "Butterfly Bill," and has pieces found in CityWatch, North Valley Reporter, CA Political Review, and the Jewish Journal.  He's written about socio-political issues on both sides of the aisle.) Photo: Anne Wenikoff for CalMatters. Prepped for CityWatch by Linda Abrams.