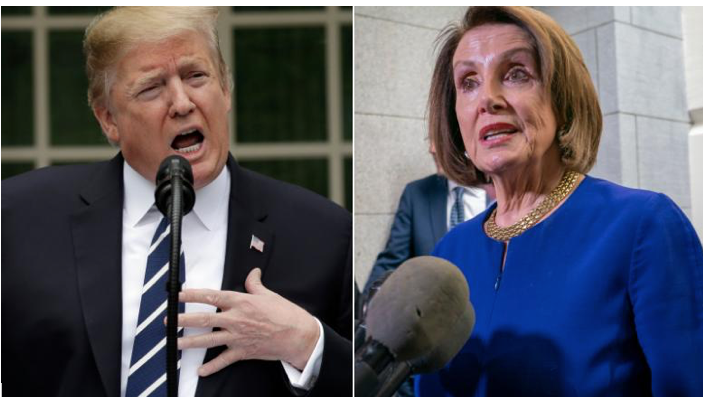 ONE MAN’S OPINION--Trump and Pelosi get away with their foul deeds for the same reasons – their respective bases have no concern for Truth Justice and the American Way.

The silliness over Lumpy’s commutation of Roger Stone’s 40-month prison sentence is the latest act in the theater of the absurd.

With his experience of over 3,000 lawsuits, Trumpy knows that the legal system caters to the rich and powerful.  The saga of Jeffrey Epstein highlights the vilely corrupt nature of the judicial system.  With knowledge that Jeffrey Epstein had raped scores of under-aged girls and that he operated a sex trafficking ring, U.S. Attorney Alexander Acosta with the consent of some Florida judge gave Jeffrey Epstein a slap on the wrist. Worst yet, the judge approved Epstein’s co-conspirators being granted immunity.  Yet, no one dares publish his name while screaming about the injustice Roger Stone’s commutation. How many 14-year-old girls did Stone rape? The Florida prosecution of Epstein was in fact a cover-up to protect more important persons.

As we now see, Epstein’s coterie of child rapists was not limited to Florida and these wealthy men were all in danger of some eager-beaver local prosecutor exposing not only Epstein but also their sexual proclivities.  A faux Florida prosecution allowed the federal government to give immunity to all of Epstein’s accomplices while concealing their identities.  If any small time DA might later try to indict, he could expect a visit from a US Attorney explaining why the local yokel should drop his investigation.

In brief, US Attorney Acosta’s prosecution of Epstein was more like a massive cover-up, somewhat like US Attorney Hanna’s faux prosecution of Los Angeles City Councilmembers Englander and Huizar.  It looks like a way to ward off a full investigation of the Eric Garcetti’s Los Angeles City Council which has been a criminal enterprise involving hundreds of billions of dollars.

Where Does Roger Stone Fit into All this Judicial Corruption?

In a sense the Mueller investigation was a fraud.  While Trump would readily accept any help from anyone at any time, Trump had not actually conspired with Putin. Of course, Putin favored Trump. Putin hated Hillary, and Putin knew Trump was mentally ill.  Putin knew enough not to open channels with mental defective.

We know Trump was not conspiring with Putin directly otherwise Donny Jr and the others would never have taken the meeting with Russian lawyer and friend of Putin, Natalia Veselnitskaya, in hopes of opening getting dirt on Hillary.  If Trump had been communicating with Putin, there would have been no need for the Trump Tower meeting.

Nancy Pelosi, however, had a reason to push this discredited idea that there was coordination between Trump and Putin.  It stopped the push among House Dems to impeach Trump.  Pelosi wanted Trump to remain in office as it benefitted her career to have a madman in the White House.

When the House Dems finally forced Pelosi to allow an impeachment inquiry, she sabotaged it by making it very narrowly focused on Ukraine.  After the stellar testimony unexpectedly began to turn the GOP against Trump, various Republicans laid out the additional information which the House should uncover so the GOP could dump Trump. Then, Pelosi pulled the plug on all the evidence gathering.  That killed the incipient GOP movement to get rid of Trump prior to the November 2020 elections.

Is Anyone Going to Buy this False Outrage of Roger Stone?

One group which probably know better is Black Lives Matter.  Look how Los Angeles has railroaded Blacks and Browns for decades.  Look at what New York has done under Dem leadership and look at Chicago.  When anyone looks at how the judicial systems in Dem strongholds have treated minorities, they see systemic corruption.  In Los Angeles, BLM knows that County DA Jackie Lacey does not stand for Truth, Justice and the American way.  After years of trying to meet with her, they went to her house and she called the police and her husband confronted them at the front door with a gun.

In a racist predatory society, the powerful are particularly vicious to any race, ethnic group, or religion they dislike.  After Garcetti’s Manhattanization of Hollywood ravaged it poor Latin community,  Thursday, January 3, 2013, LA Weekly,  Hollywood's Urban Cleansing, 12,878 Mostly Latinos Are Pushed out by City Hall, High Rents and Hipsters, By Patrick Range McDonald it was clear that South Los Angeles was the next target for gentrification.  Despite City Hall’s being a bona fide criminal enterprise, the judges sided with the developers as they moved to wipe out LA’s history Black community.

One Cannot Have Systemic Predatory Racism Without Judicial Corruption

Los Angeles’ fundamental evil is its ingrained predatory culture. By their nature, predators attack the weak. A disproportionate number of poor are minorities.  Thus, a predatory judicial system will have a greater impact on minorities, but they will attack anyone.

A Fact Which We Ignore

Corrupt prosecutors, like Alexander Acosta in Jeffrey Epstein’s case and like Blacks face in Dem cities, exist due to active support of a corrupt judiciary.  Most criminal court judges were first prosecutors and they know exactly how people were railroaded and they recognize when it happens in their courtrooms.

The Madman Is Not the Real Problem

We have constructed a predatory racist society where the fight between GOP and Dem is over who controls the corrupt system. For the GOP and the Dem leadership, the rest of us are expendables.