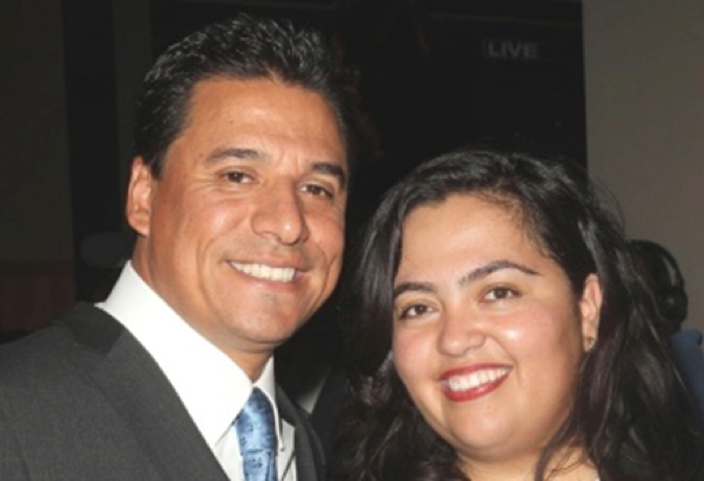 EASTSIDER-The guilty plea by George Esparza in our continuing LA criminal probe shows his racketeering continued while on the state payroll for Assemblymember Wendy Carrillo. (photo above, right) Local Democrats refuse to be pushovers and are demanding explanations.

To most Angelenos, it was shocking news. On May 27, the U.S. Attorney’s Office for the Central District of California announced that a former aide to an LA City Councilmember agreed to plead guilty to a RICO charge stemming from a “pay-to-play” corruption scheme.

The aide was George Esparza, a 33-year-old fronting for every sleazy kind of bribery, fraud, and self-enriching back-door deal that you can imagine on behalf of a 15-year Council incumbent from Boyle Heights, Jose Huizar. (photo above, left)

I suggest you peruse the actual plea agreement, particularly pages 19 through 36, wherein you get the full recital of the exact deeds to which Mr. Esparza now admits. You can find it here, and it reads like something out of “Chinatown” or a bad “Law and Order” script.

Let’s concentrate on George and his tenures with Jose Huizar and, since January 2018, with Wendy Carrillo. Hired as her district director, he became chief of staff in the District 51 Assembly office.

Since Esparza is now 33 years old, he was a mere youth when he went to work for Huizar. That was after Huizar filled the unexpired term of Antonio Villaraigosa in CD 14, and then won a full term on LA City Council in 2007, again in 2011, and finally in 2015. Court records in Esparza’s plea agreement indicates he stayed in Huizar’s office from September 2009, when he was just 22, until Dec. 31, 2017, when he departed after a last bathroom conversation with the boss in City Hall that is outlined in the plea agreement.

By 2013, Huizar appeared to figure out how to milk his role as chair of the powerful Planning and Land Use Management (PLUM) Committee for personal gain. And he used Esparza, as the plea agreement calls it, to “operate a pay-to-play scheme within the City, wherein public officials solicited and demanded direct and indirect financial benefits from developers and their proxies in exchange for official acts.”

This is how local government gets corrupted. Forget about procedures of the Planning Department, its codes and regulations, and its respect for community input. Forget about transparency and answering to the public. It became abundantly clear during the era of Huizar running the PLUM Committee that incumbent Councilmembers running for reelection could extract several favors from vendors, including corporate billboard owners.

On bended knee, and in exchange for special consideration in City Hall for other contracts they sought, billboard owners gave incumbent Council candidates free space galore. Local lawmakers like Huizar and now-disgraced former colleague and partner in crime Mitch Englander literally advertised their involvement in this influence peddling.

In 2017, Northeast LA played host to a special election for Assembly in which Huizar doled out some of the ill-gotten lucre he had collected, including from developers. He put his thumb on the scale by sending out several costly mailers for Wendy Carrillo, a supporter of charter schools, running for the open seat in District 51, encompassing East LA, Echo Park, Silver Lake, Highland Park, Mt. Washington, Eagle Rock, and El Sereno. Who else intervened to tip the scales? Former LA County and state Democratic Party chair, Eric Bauman, later disgraced for sexual assault and harassment. He manipulated the makeup of the state party caucus to anoint Carrillo after all the local Democratic clubs chose a challenger or rejected her bid.

Carrillo parlayed more than a million dollars of union money and concern about the growing problem of sexual harassment in government to a narrow win in Dec. 2017 over community candidate and Democrat Luis Lopez. The East Area Progressive Democrats (EAPD) proudly endorsed Luis Lopez and did their best.

So who was one of Carrillo’s very first hires for the state Assembly office in January 2018? George Esparza, who was at that very time still entangled in the scheme of bribery and influence peddling for Huizar.

And who stayed on for more than two and a half years? George Esparza, winning kudos from his boss Carrillo and a promotion to chief of staff. In 2019, the two of them became the subject of a complaint for sexual harassment.

Unable any longer to sweep such warning signs of wrongdoing, or far worse, under the carpet, the Assembly formally recognized the merits of the complaint in February 2020. The Speaker of the Assembly ordered Carrillo and Esparza to get training on proper workplace conduct. Carrillo promised public comment. That never occurred.

For the curious, you can find the details of the Assembly action here.

If there is one silver lining from the dark cloud of corruption of local and state representation, it’s this: We’ve seen the rise of principled and increasingly powerful local leaders in the Democratic Party who demand transparency and integrity.

On June 10, two weeks after Esparza signed the criminal guilty plea, a group of 14 Democrats in the 51st Assembly District -- all members of the East Area Progressive Democrats including several Latina/o local party leaders -- cried foul that he was still on the state payroll in Carrillo’s office. Among the signers are local Democratic Executive Board representative and former public school teacher and administrator, Eileen Hatrick; former Assembly candidate Ron Birnbaum; top vote-getter for party Central Committee, Rocio Rivas; and EAPD club president Hans Johnson. Within an hour of release of the letter came confirmation from the Speaker’s office that Esparza was out as chief of staff and off the public payroll from Carrillo’s office.

I should note that I’m a member of the EAPD, so I’m biased. However, the club’s consistent endorsement of grassroots bottom-up service-oriented local Democrats for public office is true and a matter of public record.

One upshot from the revelation and public reaction about Esparza in the plea agreement is that there is a voice of conscience and outcry among local Democrats. May 2020 will go down in history not only for the police killing of George Floyd in Minneapolis and a wave of protests nationwide demanding accountability. It will also be remembered locally for the insistence that Councilmember Huizar resign and vacate his offices both in City Hall and in our neighborhoods, including in Eagle Rock. This demand arose not only from angry constituents exhausted by scandal and ethics watchdogs. It was also led by Democrats in the 14th Council District, most notably, East Area Progressive Democrats.

The same holds true in June. While Carrillo still refuses to explain her action, or inaction, on Esparza, the thunderclap of protest from local Democrats got results.

Is accountability busting out all over? That appears to be the case, thanks in large part to alert local advocates of openness in government pressing the case for responsiveness to local needs during a pandemic and economic crisis. They have built a major presence in the Democratic Party, and they are only getting stronger.

For many years, since the departure of Jackie Goldberg from City Council in 2000 and from the Assembly in 2006, residents of Northeast LA and the Eastside have lacked a leader in elected office who was honest, highly responsive to neighborhoods, and unafraid and plain-spoken when it comes to ethics. Now, thanks in part to reformers in the ranks of local Democrats who helped invite her out of retirement in 2019 to fill a seat on school board left empty by criminal corruption, Jackie is back. So is accountability. ALL Angelenos are a little better off for it.