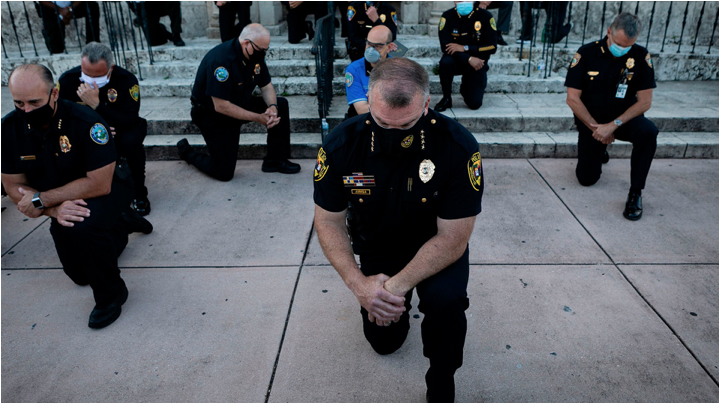 ALPERN AT LARGE--Taking a knee is usually a sign of respect ... but it can also be a sign of submission.

The former is laudable, the latter is horrible.

So which type of "taking a knee" should we do?

While I really don't think that Colin Kaepernick is a brave or principled individual (he's been rewarded quite handsomely, in both money and attention, to be a Martyr or true Freedom Fighter), I think that on THIS issue of what happened in Minneapolis he has a good point.

Cops should never tolerate what happened to George Floyd, and anyone with a conscience is outraged at what appears to have been a public and prolonged lynching ... painful to watch, and infuriating that the initial autopsy findings suggested that his death was caused by something else.

But when those police officers, in particular the thug who "took a knee" on George Floyd's neck despite the pleas of those watching to have him stop, they STOPPED being police officers.

It has been suggested that one of the four officers there did suggest changing their hold on Floyd, but otherwise those found guilty of murder rightfully should go to jail for a long, long time, and they should expect large numbers of Americans to despise them with white-hot fury.

But now we have NEW thugs, and NEW hooligans who have trashed much of the credibility of the rightful protests about what happened to George Floyd, and who are rightfully infuriated that this could happen in a supposedly-progressive city in the year 2020:

1) From President Trump on down, law enforcement should take a knee and take a stand to demand that EVERY American police force should have the right training and weed out the faux-cops who wear a badge as a way to legally bully and push around innocent Americans.

An initiative from the Department of Justice is overdue, particularly because most of us reading this thought it was already done under the last President!

2) Those protesting about police brutality and black victimization at the hands of the police should also consider taking a knee to protest the looters and hooligans who crept in amongst them and created destruction...and which led to more victimization, harm, and even death to minority residents and business owners.

An initiative from the FBI and DOJ to address the hooligans (Antifa is real, and individual hooligans with backpacks are real, too!) who harm the otherwise-venerable protesters' message.

3) Black Lives Matter, and all the "progressive" leaders who allow harm to minorities in urban centers (and who are NOT run by anyone from the right, no matter how hard they try to divert and distract from that painful reality) should also take a knee. Whether it's cowardice or willful ignorance, NO minority shootings or slayings in our nation should be tolerated.

Because the black Americans killed every week in Chicago and other urban centers also matter, and their deaths are in no way acceptable or normal in a truly civilized society.

4) Mayor Garcetti might "take a knee" for political points, and may be forced to defund the police for financial purposes ...

... but it's not to figure out that this will lead to MORE minority deaths as lawlessness and vigilante justice becomes the "new normal". Those who are insatiable and have NO mollifying actions to stop their endless fury, might want to take a knee as well.

All cops are NOT like the failed and thuggish police department in Minneapolis, and good cops should raise their voices louder against posers who wear a uniform.

All blacks are NOT criminals and should raise their voices louder against criminals.

All Americans, including white Americans, are NOT racist, and should raise their voices louder against racists of all colors and backgrounds.

All protesting are NOT rioters and should raise their voices louder against the looters and criminals who snuck in amongst them.

Let's take a knee together--we're all hypocrites and weaklings in the eyes of God--but let's not anyone have to submit to anyone else if we really want to restore and heal our fractured nation.