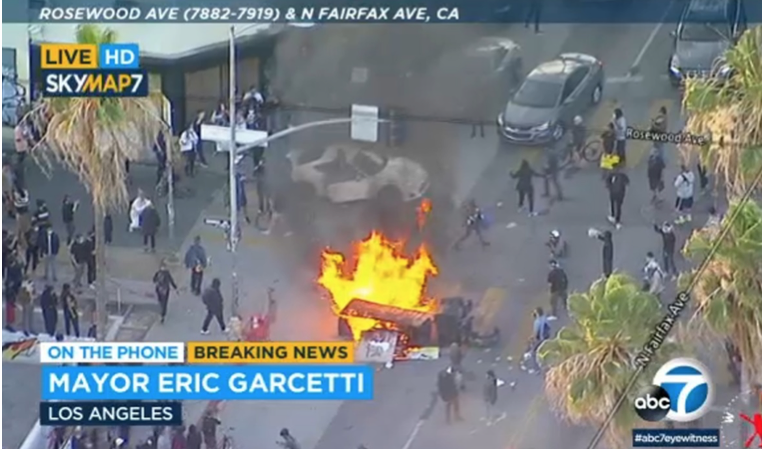 @THE GUSS REPORT-On Friday, the LAPD made 533 arrests of anarchists, looters and arsonists who brought mayhem and destruction to our streets. And that’s just within LA city limits.

According to the agency, “The charges include Burglary, Looting, Probation Violation, Battery on Police Officer, Attempt (sic) Murder and Failure to Disperse.” Note the absence of arson and mayhem.

And then there’s this from the same LAPD announcement: “All but 18 of the arrestees have (sic) released on their own recognizance,” which is a direct by-product of California’s disastrous bail reform, motivated by social justice goals and reducing the cost of our jail and prison system.

How many of the 515 released Friday rioters do you suppose returned for the more destructive Saturday riot? A conservative estimate would be about 512.

And much of it was preventable because Garcetti gave winks and nods to continue their destructive crimes against the rest of us in what will historically be known as the 2020 George Floyd Riots.

Garcetti did this in many ways. Before we get into them, let’s point out that the Mayor has been repeatedly exposed as something other than the Peter Pan-like boy wonder that he and the fawning LA mainstream media portrayed him to be, as evidenced by the growing corruption scandal that developed under his tenure as Mayor, LA City Council president and Councilmember dating back to mid-2001.

We know Garcetti lied to us about helping veterans, curbing homelessness, about LA being “no-kill” in its deadly animal pounds and so on. His gutless decision-making brought typhus inside LA City Hall and local business to its knees during his pointlessly long coronavirus shutdown. And it was largely due to his being a neurotic megalomaniac, as I recently wrote, quoting commentator Tucker Carlson.

This weekend, Garcetti’s douchebaggery was on grand display because, as LA was on fire and violently looted, his spineless perspectives gushed for all to see. Take for example what happened after the Friday night riots came to our streets and many others across the United States as a result of the brutal, deliberate killing of George Floyd one week ago at the hands of the Minneapolis Police Department.

Garcetti was obligated to ensure that those 515 rioters did not return to the street and could have done that by exercising many tools at his disposal, including making an emergency order to delay their release due to the overwhelming volume of time it takes to process each arrest. He just needed to slow-walk it so cooler heads could prevail.

Garcetti also suggested that the LAPD put down the batons and “walk hand-in-hand” with the rioters at the exact moment on Saturday when the rioters torched LAPD vehicles, threw rocks at the cops and incited destruction of businesses and jobs finally emerging from the coronavirus lockdown.

As LA (and Beverly Hills and West Hollywood) burned, Garcetti delusionally inferred during his Saturday press conference that if the rioters, whose interest was more in stealing from Louis Vuitton and Adidas than grieving George Floyd, had greater access to community college, this wouldn’t be happening.

On what planet does Eric Garcetti think arsonists and anarchists are interested in community college? Some may already have full degrees, if not more. What does he think they would study?  Coding? Fire science?

But arguably worst of all was Garcetti defiantly saying “this isn’t 1992,” when asked whether he would call in the National Guard to restore safety and order, referring to the destruction caused by the LAPD beating Rodney King to within an inch of his life nearly three decades ago.

That was all the signal those 515 released rioters needed. There would be no National Guard for them to contend with.

It was Eric Garcetti’s green light for them to torch, loot and destroy Los Angeles, Beverly Hills, and West Hollywood. That was his nod for them to ignore his pointless curfew for the rest of Los Angeles, as evidenced by the mayhem that rolled continually into early Sunday morning.

It was just a few hours later – after massive destruction – that Garcetti reversed course and called for help from the National Guard. Garcetti tipping his hand to the rioters was stupidity defined.

Garcetti enabled much worse destruction than we already endured. He won’t, but needs to, resign once and for all from LA politics. And Joe Biden would be wise to dump Garcetti from his campaign co-chairmanship as rapidly as he is likely to dump Minnesota Senator Amy Klobuchar as a potential vice-presidential candidate, because they both had a hand in enabling this death and destruction.

And in the greatest ironies of the weekend, Garcetti’s decision-making had two other destructive aspects to it.

First, was that Garcetti’s order for all of us to wear face masks helped maintain the anonymity of the rioters, or at least those who bothered to wear one. And second was the fact that the dense proximity of the rioters to one another, as shown in this photo reportedly taken this weekend near Pan Pacific Park, shows that there is no lingering respect for his social distancing mandate.

Garcetti botched this entire incident beyond belief. He is the worst mayor we have had in our lifetimes, bar none, and he needs to resign and go ruin some other town. He won’t, but he should.  This is all on him. Joe Biden, are you paying attention?

POST SCRIPT: On Sunday morning, the LAPD released this update on the Saturday night carnage:

“The Los Angeles Police Department continues to assess the full extent of property damage from Saturday’s activities. Several police vehicles were vandalized, and numerous businesses were damaged and looted. It is estimated around 398 arrests were made on Saturday related to the protests. The charges include Burglary, Looting, Vandalism, Failure to Disperse, Felon in Possession of a Gun, and numerous Curfew violations. Five Los Angeles Police Officers were injured during the protests on Saturday. Two were hospitalized. Their injuries ranged from contusions and broken bones to a fractured skull.”