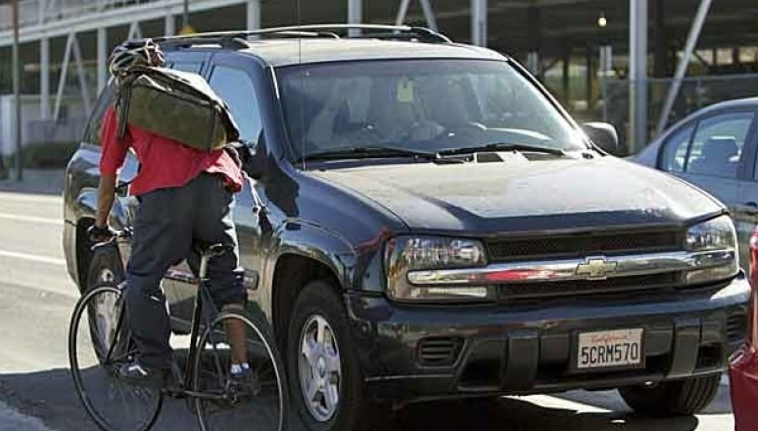 PLANNING WATCH-While trying to avoid catching or spreading the Covid-19 virus, I have ventured outside to take long bike rides in my own neighborhood, and in many adjacent Wilshire area neighborhoods.

Each day I try to look at Los Angeles with fresh eyes, and then apply my background in city planning to what I directly observe.

Much of what I have seen is bad and will get worse. Yet, it could have been prevented if legally required planning processes and adopted planning policies had been adhered to, especially Chapters 8, 9, and 10 of the General Plan Framework Element (1996).

LA’s streets and sidewalks are in deplorable condition. Nearly all LA streets, whether cement or slurry seal, are riddled with cracks, patches, and potholes. Adjacent sidewalks are is equally poor shape. When you drive, you don’t pay much attention to them, but when you bike in LA, you need to be extra careful. But if you want smooth, well-maintained streets, nearby Beverly Hills offers a stark contrast to LA. It is only a few minutes away from the Wilshire Area, and its well-maintained streets are perfect for biking. The explanation for this difference is city priorities, not tax revenue since LA’s City Hall consciously allowed its streets and sidewalks deteriorate. For example, during the current pandemic, the City employees who could repair streets and sidewalks are being furloughed, while the LA Times reports the LAPD is handing out $41 million in bonuses to police officers.

Los Angeles has minimal bicycle infrastructure. During these rides I have not yet encountered clearly marked bike lanes, much less the protected bike lanes that are now common in nearly all other large cities. In LA, you are lucky to find a faded “sharrow” (bicycle lane icon) and the occasional remnants of a painted strip on the side of a street. Given LA’s mostly flat street system and nearly perfect climate, the city could become a bicycle rider’s paradise. If cities like Vancouver, Seattle, and Portland have overcome their hills and rain to build out a bicycle lane system that garners 10 percent of all trips, Los Angeles could too, if it were a City Hall priority.

Los Angeles’s urban forest is a total hodge-podge. Unlike adjacent Santa Monica, Culver City, West Hollywood, Santa Monica, Burbank, San Fernando, and Glendale, hardly any LA street trees are well planted. Unlike these other cities, most of LA’s streets are a mishmash of tree species, many of which lift sidewalks or collide with overhead wires. Furthermore, even though the neighborhoods I bike in are 90 years old, many streets, especially commercial corridors, have not yet been planted with trees. While existing trees are dying because of over-development, traffic accidents, climate change, and disease, these treeless expanses are still waiting or their first trees. Who knows if or when this will happen? Will an individual property owner decide to plant some random trees? Will City agencies, like City Plants or the LADWP, give away trees piling up in their storage facilities? Will a Business Improvement District (BID) decide to plant street trees? Will a City Planning zoning case require property owners to plant a few street trees? This happens all the time in Los Angeles, without any apparent coordination, even though LA’s natural setting is rapidly changing because of climate change, heat islands, and gentrification.

Beautiful Residential Neighborhoods. The older residential neighborhoods I bike in, mostly in the Wilshire Community Plan area, have mile-after-mile of stunning Spanish revival houses, duplexes, and small apartment buildings. It is, therefore, no wonder that these areas have so many protective zoning overlay ordinances, especially Historical Preservation Overland Zones (HPOZs) and the Beverly-Fairfax Historic District. Nevertheless, many of these older neighborhoods are being rapidly gentrified, with City Hall’s blessings, such as construction exclusions from Pandemic closure orders. In the map below this gentrification process is painfully visible in neighborhoods colored white since they have no special protection and in yellow and green areas because their overlay ordinances are weak and poorly enforced.

Hopscotching real estate speculation: The neighborhoods north of Wilshire Boulevard, despite their protective ordinances, are filled with speculative construction projects, especially McMansions, market-rate and luxury apartments, home remodels, and mixed use and commercial buildings. A legacy of LA’s building boom, many of these projects will nevertheless become financially distressed projects gobbled up by major real estate companies that anticipated this financial crisis.

As for the neighborhoods south of Wilshire, there are also nodes of speculative real estate, especially on Pico Boulevard, but their interior areas that have not yet been mansionized. For those familiar with the frequently updated Los Angeles Development Map, real estate investment is selective and focuses on the most profitable neighborhoods first, even though LA’s underlying zoning laws allow similar real estate projects in the entire city.

Homelessness: One of my surprises was that homelessness and homeless encampments are not evenly distributed. They appear to be most common in those neighborhoods where expensive in-fill housing has replaced quickly demolished, older, lower-priced housing. Of course, this might change when the current financial crisis increases homelessness though many new evictions and foreclosures by June.   In the meantime, I have already noticed more For Rent and For Sale posted on existing apartments and houses.

Little rooftop solar. With over 300 days of sun and few peaked roofs, Los Angeles could become the envy of cities everywhere. But, in these older neighborhoods, where I biked, there are hardly any roof top solar voltaic panels or solar hot water heaters. This ought to change, especially because the prices of battery back-up systems and inverters that switch solar-generated DC current to AC have dramatically declined. When the permits and tax breaks for these distributed systems make them more affordable, let's hope that the transition from a centralized power system largely based on fossil fuels to a distributed one based on renewables energy sources moves quickly.

Overhead electric and telecommunications wires are a disaster waiting to happen. While Street Lighting‘s power source, as well as water mains, natural gas, sanitary sewers, and storm drains are undergrounded, LA’s electrical power and telecommunications cables are strung above ground. In fact, the multiple telecommunications cables that provide our Internet, phone service, and cable TV have been hung on existing LADWP poles. When you peddle by and see how overloaded this entire system is, it is easy to foresee that a major earthquake or windstorm will leave many Los Angeles neighborhoods without electric power, Internet, and cable television for days. I cannot track down any plans to remedy this situation, but it makes me wonder how Street Lighting managed to underground its entire system, yet the LADWP chose to keep its electrical wires and the telecommunications cables tacked onto their utility poles above ground and in harm’s way.

The cumulative impact of these observations during the pandemic leads me to an obvious question. How long can Los Angeles kick its infrastructure can down the road until irreversible major harm results?

(Dick Platkin is a former Los Angeles city planner who reports on local planning issues for CityWatchLA. He serves on the board of United Neighborhoods for Los Angeles (UN4LA) and is co-chair of the new Greater Fairfax Residents Association. Please email comments and corrections to [email protected] or via Twitter to @DickPlatkin. Prepped for CityWatch by Linda Abrams.