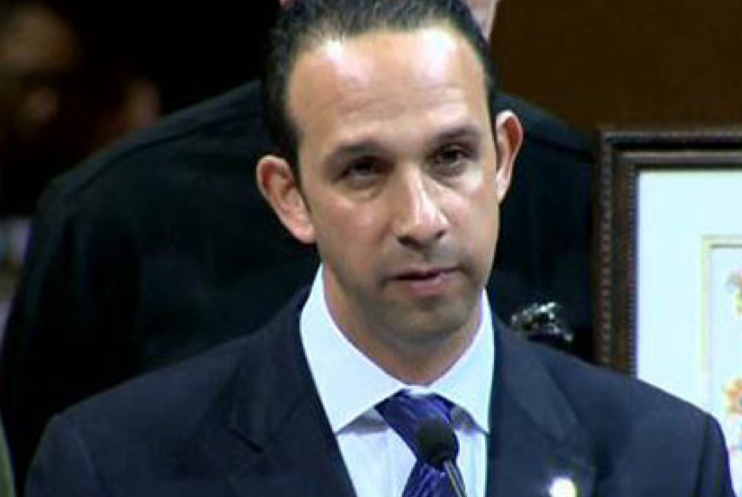 INSIDER REPORT--I wasn’t at all surprised when former LA City Councilman Mitchell Englander was caught up in a City Hall corruption probe and pleaded guilty to a charge that will almost certainly lead to a prison term.

As head of a non-profit organization doing battle with companies bent on plastering the city with billboards and other forms of sign blight, I spent many hours in the chambers and meeting rooms of City Hall.  There I got a closeup look at the councilman who touted his service as an LAPD reserve officer and fashioned himself as a champion of law and order.

Contrary to that image, I found him to be venal and self-serving.  He accepted free billboard campaign advertising from a company whose interests were directly affected by his votes.   He used public service ads paid for by a billboard company to spread his face through his district.  As a member of the council’s Planning and Land Use Management (PLUM) committee, he promoted the wish lists of Clear Channel, Lamar and the other big billboard companies in a transparent manner.

To be fair, the chairman of the PLUM committee, Jose Huizar, also took campaign contributions in the form of free billboard advertising, as did some other council members.  Huizar was also a promoter of the interests of Clear Channel, Lamar, Outfront Media, and others.  But while he has been identified as another target of the corruption probe, he hasn’t yet been charged with any crime.

My first direct experience with Englander came ten years ago, when our organization partnered with other non-profits to push for a ban on alcohol advertising on street furniture and other forms of public property.  Our argument was the city should not be, in effect, a promoter of alcohol even though it was legal.  We quickly got the support of Councilman Richard Alarcon, who introduced a motion to that effect.  It was seconded by Bill Rosendahl, Paul Koretz, Tony Cardenas, and Huizar.

The motion went to the council’s Public Safety Committee, chaired by Englander.  While ads for beer and hard liquor continued to appear in significant numbers at bus stops and street corner kiosks, we solicited community impact statements from neighborhood councils and expressions of supports from groups fighting alcohol and drug abuse.  But there was nary a peep from the committee and its chairman.

Finally, ten months later, the committee asked the city’s chief legislative analyst for a report on the subject.  In the meantime, I had spoken to one of the lobbyists for the company with the street furniture contract, who told me that it opposed the ban but would consider running public service ads about alcohol abuse.  An ad at a bus stop saying “Don’t Drink and Drive” or “Drink Responsibly” a few blocks from another bus stop ad for Maker’s Mark whiskey?  It struck me as absurd.

The lobbyist also told me that the company got 20 per cent of its revenue from alcohol ads, and loss of that revenue would translate into a loss of revenue to the city from the street furniture contract.

Was that why Englander, the law and order stalwart, was seemingly dragging his feet even though studies had been cited showing the social and financial costs of alcohol abuse in the city?  Or were the billboard companies whispering in his ear about upcoming political campaigns?

The measure languished for another two years.  The Budget and Finance Committee had a look at it and the Public Safety Committee asked for more information regarding the potential loss of revenue.  Alarcon threatened a move to force the measure to the council floor.

Finally, the committee gave its unanimous approval.  As people who had been working for the ban gathered outside the meeting room for a group photograph, Englander appeared and asked to be included in the picture.  Given the delays in his committee, that struck more than a few as opportunism.

The measure then breezed through the full council on a unanimous vote.

But I got my longest look at Englander in action at meetings of the PLUM committee, which handles almost all signage and billboard legislation.  When a stricter sign ordinance passed by the City Planning Commission came up in the committee, he opposed taking action and called for going over it “line by line” even though it had been sent to the committee almost a year earlier.  At later meetings he was highly critical of the idea of restricting digital billboards to special districts and called for “amnesty” for the many billboards in the city that were out of compliance with their permits or lacked any permits at all.  Nobody in the building or planning departments had suggested such a thing, but it was high on the wish lists of Clear Channel, et al.

While still a committee member and in a position to vote on billboard legislation, he ran for a seat on County Board of Supervisors.  During his campaign, more than 100 billboards popped up in the San Fernando Valley touting his candidacy.  These billboards were paid for, not by his campaign, but by Lamar Advertising, which stood to profit handsomely from a vote in favor of new digital billboards.

During that ultimately unsuccessful campaign, he took more than $20,000 from outdoor advertising companies and their lobbyists.  Demonstrating the old adage that a picture is worth a thousand words, a photograph surfaced during the campaign that showed him with his arm around the head of a major lobbying firm representing Clear Channel.

Things got personal during a PLUM committee meeting in 2016.  As a city employee was giving a report regarding billboards, he addressed me by name and said I should listen carefully, because I almost always got things wrong in the blog posts and articles I wrote on the subject.

I didn’t have an opportunity to address this slander at the meeting, so I sent his office an e-mail asking him to specify the things he believed I got wrong so that I could address them.  I had always worked hard to be factually accurate, and his accusation not only pained me personally but could affect my credibility with people who depended upon those posts and articles for information.

He didn’t respond.  At the next PLUM committee meeting I stood at the microphone in the public comment period and challenged him directly to either back up his accusation or retract it.  He didn’t respond then, either.  I finally wrote an open letter to him which can be read here.

I feel sorry for his family and what they will inevitably go through by having a husband and father charged with a crime and sent to prison.  I feel sorry for the constituents who looked to him to represent their interests, not the interests of developers willing to slip him envelopes full of cash.

But I don’t feel a shred of sympathy for him.  He was a politician who put his own interests above principle, and the sooner the city rids itself of politicians of his ilk, the better.  But it can’t depend upon the FBI to root out this blight.

The city has an obligation to act to remove the temptations that lead morally and ethically deficient politicians like Englander down the path of corruption, whether that corruption be blatantly illegal, as in taking an envelope of cash and then lying about it, or legal, as in accepting campaign contributions clearly meant to result in favorable votes.

(Dennis Hathaway is the former president of the Coalition to Ban Billboard Blight (now the Coalition for a Scenic Los Angeles).  He is currently working on a book about the Lincoln Place Apartments in Venice and the long battle between its tenants and landlord over redevelopment of the property. Dennis is an occasional CityWatch contributor.)