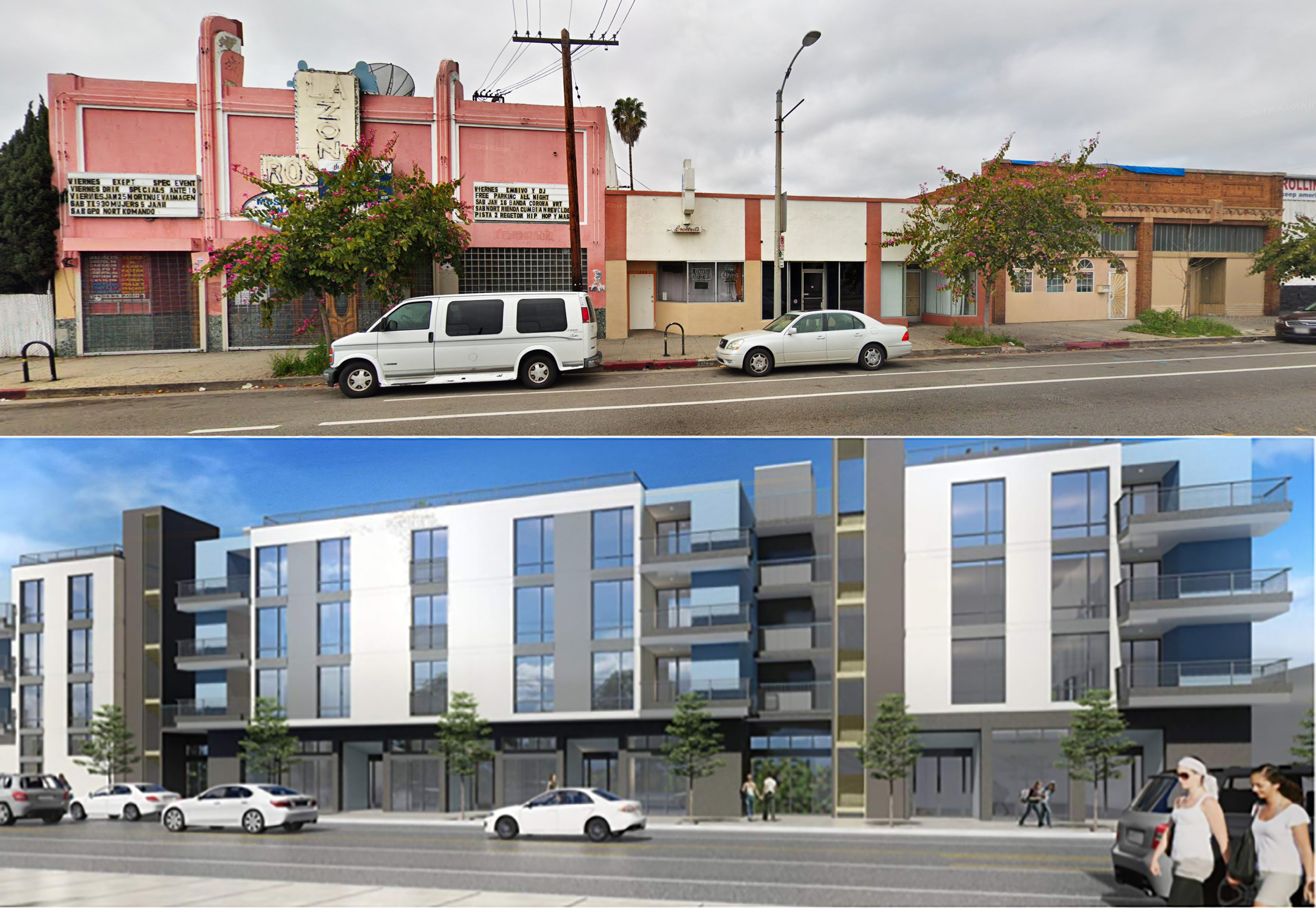 PERSPECTIVE--The prompt: “you have been muted” said it all.

While the developer’s representative, Councilman’s spokesperson, and others were given unlimited time to speak on behalf of a project proposed for 1309 Pacific Avenue (Rendering in photo above, bottom) in LA’s San Pedro neighborhood (CPC-2019-4908-DB-SPR), testimonies from concerned community members and the attorney representing Citizens Protecting San Pedro were crushed into a minute each, if they managed to connect with the meeting at all. Their testimonies ended with the demoralizing prompt: “you have been muted.”

My April 20 article, “City Hall Pushes Through Real Estate Projects During the Covid-19 Pandemic,” published my letter to the CPC regarding questionable plans for the Commission’s April 23 virtual hearing, asking for it to be postponed until after the COVID-19 Pandemic. But City Planning Zoomed ahead. Following is an account of the convoluted and inequitable process that community members endured while attempting to participate in the City’s telephonic hearing.

Before the Hearing - Misinformation and Technical Problems

I never received a response from Vince Bertoni, Director of City Planning, to my initial letter. I did receive a lengthy PR piece from his Media Department, signed by Mr. Bertoni, explaining the importance of “putting people first while continuing to provide important City services” and “building clear lines of communication with stakeholders” during COVID-19.

The reality was just the opposite.

Community members were confused about proceedings and unsure how to participate. As word spread that the Thursday meeting would be conducted via Zoom, stakeholders with access scrambled to familiarize themselves with the technology. On Wednesday the Planning Commission’s Executive Assistant clarified via email that “. . .Although we are using Zoom, there is no video link to share. Our meeting is audio only.” Subsequently they provided instructions including: “If you have a public comment for any item on the agenda please use the Zoom Dial by Phone. Dial by phone: +1 (669) 900-6833, Meeting ID: 948 2265 3440.

This information was quickly shared via email -- but the meeting ID was incorrect. Subsequently community members who dialed in to participate, following the instructions provided by the CPC office, were blocked.

For example, CSULB Professor Fran Siegel, a San Pedro resident, was misidentified: instead of calling the last four digits of her phone number as was supposed to happen, a man’s name was called -- preventing her initial General Public Comment. Later, during the agenda item, the same man’s name was called, followed by silence -- Ms. Siegel intuitively spoke up asking, “is it my turn?” and the administrator answered yes, so she proceeded. Another resident, Mona Dallas Reddick, President of the San Pedro Bay Historical Society, was on the call, but there were no instructions to press *9 to ‘raise her hand’ so she was never queued to speak. Ms. Reddick’s muted concerns included the effects of out-of-scale height, safety, the inadequate number of low-income units, traffic increasing pollution in an area already burdened by industry-generated pollution, and the need to evaluate the historic cultural significance of the dancing Waters/La Zona Rosa building by the LA Conservancy.

During the hearing - Kangaroo Court, Bait and Switch

The phone-only format reduced concerned residents to disembodied voices, diminishing their impact. Making matters worse, the Chair decided, on the fly, to reduce public comment to one minute, after the Commission President told participants to be sure to speak slowly so that everyone could clearly understand them. The developer’s representative, Jonathan Lonner, did just that, even extending his presentation beyond the time he had committed to. Councilmember Buscaino’s representative, Aksel Palacios, who had the last word, was told “take as much time as you need” -- he calmly rejected community concerns.

But opposing members of the public, if they were lucky enough to make it into the queue, raced through their concerns with barely a moment to breathe. Prior hearings had allowed two minutes, and their comments had been prepared with that in mind. The points they could make were slashed in half along with their time.

Having submitted detailed written comments, I tried to use my sixty seconds to point out that these same developers, Root Real Estate/Square One Homes, have already purchased property in San Pedro, loaded it with entitlements (with the help of Councilmember Buscaino),and flipped the entitled lot to another developer at a huge profit. I asserted that the practice is destructive and irresponsible -- speculation by middlemen that drives housing costs up and undermines affordable housing goals.

The project has only 12 affordable units -- but it’s bloated with 90 market rate units that most people in San Pedro can’t afford. . .affordable housing is clearly not the priority here. Councilmember Buscaino drives developers around town, securing lucrative deals, enabling off-menu incentives. Yet he has cut off all communications with his own community. Why? Perhaps the current investigations will shed some light.

The elephant in the virtual room was the abrupt switch, in the midst of the proceedings, of the Floor Area Ratio (FAR) bonus item from on-menu to off-menu. The community had no notice or opportunity to be heard on the item. Rather it was switched to a discretionary gift, at the whim of the Commission. The project was changed in an instant, effectively voiding the initial public hearings. And the Commissioners wrongly acted like it was no big deal. Attorney John Given, representing the community group Citizens Protecting San Pedro, attempted to address this fallacy during his rushed one-minute testimony, rather than present his prepared points.

The Commissioners had none of it. Commissioner David Ambroz (the Executive Director of Corporate Citizenship and Social Responsibility for Disney) asserted: "there are no merits in any of the community comments,” and one by one, all of the City Planning Commissioners voted to approve the project.

Robin Rudisill, Chair of the Planning, Land Use and Transportation Committee of the Coastal San Pedro Neighborhood Council, but speaking as an individual, summed it up: “I don’t even think they understood what they were approving and how huge the size bonuses requested were, supposedly needed in order to provide just 10% very low income units (51% bonus over normal height limits and 77% bonus over normal FAR limits, both of which are significantly above the standard 35% density bonus!). Their big point for approving the project was that we need housing and that’s about as deep as they went. It’s a developer’s field day, as they are getting away with extraordinary and unprecedented height and FAR variances, by “using" the state’s need for more housing, and the City is just looking the other way in terms of the unreasonable levels of requests and inconsistencies with the law, including CEQA.”

After the Hearing: Impacts and Precedents

Rudisill continued: “The key issue here is the cumulative impact of this project and the precedent it sets in the San Pedro community. It is in significant conflict with the recently approved San Pedro Community Plan, which is meant to protect against projects such as this that are drastically out of scale and out of character with the community. The CPC didn’t seem to understand this conflict and the resultant adverse cumulative impact, as it did not consider the proposed project along with the almost identical pending project by these same developers just up the street, and the ten other local housing developments in the works in the general area. That’s unacceptable!”

According to Noel Gould, Board member of the Coastal San Pedro Neighborhood Council but speaking as an individual, "The sad fact is that such projects are primarily market rate housing cash machines for developers who have no interest in providing the lower to upper middle income housing that San Pedro so desperately needs. Councilman Buscaino fully supports these developments and developers, but refuses to meet personally with the community he's been elected to serve.”

The City Planning Commission’s approval of this project was expedited by a lopsided, poorly organized virtual hearing that further distanced Commissioners from community process. It effectively crushed stakeholders’ voices and paved the way for increased exploitation and impropriety. The online 'kangaroo court' can now simply turn off testimonies at will. While the CPC and politicians barrel ahead during the Pandemic, the public, at its weakest, without access to case files and reduced to faceless voices, can simply be muted. This hearing sets a very dangerous precedent, and the practice must not be allowed to continue.

The Buck Stops Where?

Who is responsible to call the shots and stop the use of this COVID-19 crisis as a smokescreen for greed?

Root Real Estate/Square One Homes' Adam O’Neill (co-founder who oversees the firm's entitlements) is doing what he’s allowed to do, enabled by his agents, upside-down City Planning policies, and Councilman Buscaino’s goodwill. The Councilman wants to increase housing numbers as mandated by the Mayor. Mayor Garcetti is trying to keep things moving during the debilitating COVID-19 crisis, hence the online hearings, and is following Governor Newsom’s orders to increase affordable housing statewide. But something’s gone terribly wrong.

Mayor Garcetti and Governor Newsom, muted Angelinos need you to acknowledge the problem and declare “the buck stops here.”

(Danial Nord can be reached at danialnord@hotmail.com.) Prepped for CityWatch by Linda Abrams.