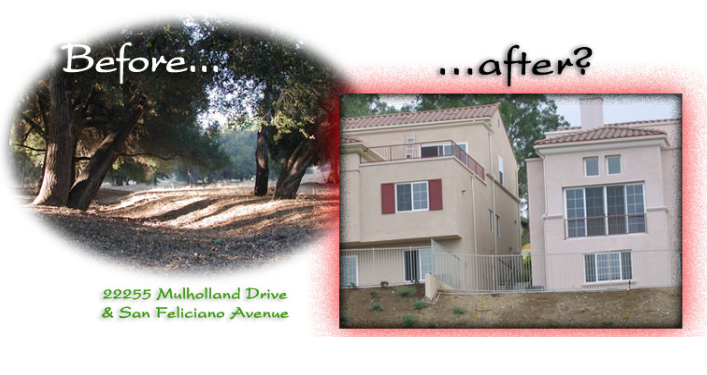 VOICES-Did we really need more proof that developers are calling the shots at City Hall? Of course not. But we got it anyway.

The proposed Mulholland/San Feliciano project has been in the works for well over a decade. The project site is a 6.2-acre parcel located in Woodland Hills that's mostly undeveloped. The original plan, submitted back in 2005, included 37 single family homes, but the number has since been reduced to 19. Each residence would have three or four bedrooms and a two-car garage.

Construction activities for the project would include the removal of 28 trees, 15 of which are protected coast live oaks which would be replaced at a 4:1 ratio.

Mulholland/San Feliciano was finally approved in late 2019, and to give you an idea of how unpopular the project is, the decision was hit with eight different appeals. (Does this set a new record?)

In addition to a number of individuals, the appellants also included Save Oak Savanna (SOS, a community group), the Mountains Recreation & Conservation Authority (MRCA, a local government public entity) and the Santa Monica Mountains Conservancy (SMMC, a State agency). Among the issues raised were loss of open space, impacts to wildlife, and impacts to public space at the nearby Girard Reservoir. It's also important to point out that the project site is in a Very High Fire Hazard Severity Zone. You may remember that just last year the Getty Fire ravaged an area not too far south of the project site, destroying a number of homes.

Anger over the project had been simmering in the community for years, but that anger turned to fury when it was announced by the Department of City Planning (DCP) that all the appeals had been denied. Why had they been denied? Was it because none of the appeals had any merit? Nope. They were denied because a meeting of the South Valley Area Planning Commission (SVAPC) was cancelled due to the coronavirus, and the developer refused to approve a continuance.

You're probably thinking, "Wow, that sounds pretty crazy." But in order to appreciate just how absolutely crazy it is, you need a little more background. You see, this isn't the first time something like this has happened. Unbelievably, the Los Angeles Municipal Code (LAMC) actually allows the project applicant to decide whether an appeal hearing will be continued or not. And what's even more insane, the LAMC also says that if the appeal isn't heard within a set period, it's automatically deemed denied.

But we still haven't plumbed the depths of insanity that characterize the approval process in the City of LA. Again, this isn't the first time the City has denied an appeal using this mechanism. Last week Luna & Glushon, the law firm representing Save Oak Savanna, sent a letter to the SVAPC pointing out that the City has been taken to court over this practice three times since 2007, and it's lost every time. In both La Mirada Neighborhood Association v. City of LA and Joshua Leichtberg v. City of LA, the court stated that the LAMC is in conflict with City Charter Section 552, which requires that Area Planning Commissions hear and determine land use appeals. In Lucille Saunders v. City of LA the court went further, holding that sections of the LAMC that allow an appeal to be denied in this manner were a denial of the basic right to due process.

You might think that after losing three times in court the City Council would take action to correct the situation and set about revising the LAMC, but you'd be wrong. To give you an idea of how deeply in denial at least some of our elected officials are on this issue, you need to read the letter sent to the community by Councilmember Bob Blumenfield, who represents the area where the project is located. While Blumenfield did oppose the project, his letter is a classic example of the twisted thinking that’s commonplace at City Hall. After explaining that the LAMC allows the developer to thwart an appeal by rejecting a continuance and running out the clock, the Councilmember offers this heartfelt sentiment:

"I think it is awful that the community’s ability to weigh in on this issue was truncated by the timing related to the Covid pandemic."

Apparently Blumenfield sees no problem with the LAMC. He lays the blame for this sorry mess on Covid-19. But the appeals weren't shut down by the virus. They were shut down by sections of the LAMC that the courts have repeatedly said are in conflict with established law. The fact that the City Council hasn't responded to the courts' decisions by revising the Code makes it pretty clear that most of the Councilmembers share Blumenfield's view.

Really, though, none of this is too surprising. In fact, if you've been following the City of LA's development free-for-all for any length of time, you'd have to say this kind of thing is standard operating procedure.

Remember the tens of thousands of dollars sent to Councilmembers by working class employees of Samuel Leung, the developer behind the Sea Breeze project?

Or how about the Millennium Hollywood, where the developer's consultant claimed there was no earthquake fault below the project site, despite the fact that State maps clearly showed it was crossed by the Hollywood Fault?

And who could forget the recent revelations about former Councilmember Mitch Englander and his wild trip to Las Vegas? Or the scenario recently reported by the Department of Justice, where appraiser Justin Kim met with "Developer C," who gave him a paper bag filled with $400,000 cash to be passed along to "Councilmember A"?

We could argue over whether the goings-on at City Hall are closer to Raymond Chandler or Lewis Carroll, but the mess with the Mulholland project is just another reminder of something most of us already knew. When it comes to development in the City of LA, developers call the shots. The public is shut out of the process.

(Casey Maddren is President of United Neighborhoods for Los Angeles (UN4LA [www.un4la.com]), a community group advocating for better planning and better governance, and a CityWatch contributor.) Prepped for CityWatch by Linda Abrams.