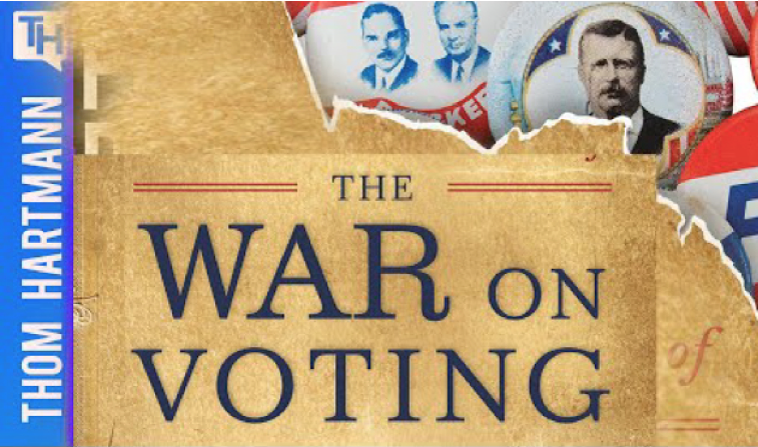 AT LENGTH-If anything defines this era of American politics it is the question of how someone as corrupt as Donald J. Trump can become president.

Revelations from Hillary Clinton’s emails, hacked by Russia and their clandestine use of social media to influence the 2016 elections, continue to leak in dribs and drabs. Even Trump’s impeachment, which was centered on his attempt to extort Ukraine’s government to create a false narrative against Joe Biden, makes Thom Hartmann’s latest book, “The Hidden History of the War on Voting — Who Stole Your Vote — And How to Get it Back,” all the more relevant.

For some of our readers, Hartmann may not be well known. He hosts the number one rated progressive talk show in the nation, which airs locally on KPFK-90.7 FM. He is described as an American radio personality, author, former psychotherapist, businessman and progressive political commentator. He is also the four-time Project Censored award-winning, New York Times best-selling author of 25 books currently in print in over a dozen languages.

What makes his recently published book so timely is that we are living in this era of vote suppression, voter purges and crookedly gerrymandered voter districts. Hartmann documents the long history of election stealing in this country using the tools of voter suppression, disinformation campaigns and racial intimidation. Trump was elected president by only 26 percent of the eligible voters in 2016. With the deployment of stringent voter ID laws, the reduction in the number of polling places and polling hours and the purging of voters– ostensibly to eliminate voter fraud of which there is very little evidence — the Republican Party is undermining your right to vote.

In less than 200 pages of well-researched material, Hartmann goes from the founding bias in the U.S. Constitution regarding the three-fifths compromise to Madison’s warning about despotism founded upon corruption by an oligarchy. This couldn’t be more relevant now.­ Trump is the tyrant that our forebears have always feared.

The Republican Party was once the party of President Abraham Lincoln, while the Democratic Party was the party of the southern Dixiecrats. That all changed by the 1960s when President Lyndon B. Johnson signed the Civil Rights Act. Then, after Watergate and the resignation of Richard Nixon, the Republican Party lost to Jimmy Carter in 1976. According to Hartmann, “the Republicans thought if you can’t beat a peanut farmer from Georgia we’re screwed.”

Because of a series of Supreme Court decisions allowing corporate money to flow into political campaigns, former California Gov. Ronald Reagan got elected on a platform that included trickle-down economics and his 1980 presidential campaign’s conspiracy with Iran to delay the release of 52 American hostages until after the election in exchange for weapons and the unblocking of Iranian government monetary assets in U.S. banks. This became known as the Iran-Contra scandal four years later.

“It wasn’t until the election of [Bill] Clinton in 1992 that the American people figured it out,” Hartman said in an interview.

Some of Hartmann’s growing concerns about voting fraud and election stealing started with the 2000 presidential election that came down to counting the votes in Florida where George W. Bush’s brother, Jeb, was the governor.

“I’ve been alarmed since the 2000 election with the Bush versus [Al] Gore election. A year later [in November] 2001 The New York Times and Washington Post brought all the ballots and counted and recounted them and released the results on Nov. 1, 2001. By any measure, Al Gore won the Florida vote. They [the news media] didn’t want to question the legitimacy of a sitting president during a national crisis after 9/11.” So the story was buried.

Again, in the 2004 election between John Kerry versus Bush, the Ohio exit polls showed that Kerry won the vote, but just before the results were released the state computer server crashed and a backup server that was out of state and owned by a person affiliated with the Bush campaign was used. Bush won Ohio and was re-elected to a second term. Ohio is also one of the mid-western states that used voter suppression to take people off the voter rolls.

The Help America Vote Act created provisional ballots, but what is little understood is that voters who use them have three or four days to show that they are who they say they are by going to their county registrar with proper ID.

“People are not told that provisional ballots are not counted unless there is a challenge to the vote,” Hartmann wrote.

Here in California, there are also provisional ballots. Not only have some activists challenged the new electronic voting system, but reporters like Greg Palast call these “placebo ballots.” This and much more is revealed in Hartmann’s new book — from voter suppression in Wisconsin, Michigan, Florida and South Carolina to the hundreds of thousands of registered voters who have been purged from the voter rolls in those states.

“Georgia purged over 1 million voters when Stacey Abrams [ran] last time for governor and only lost by 50,000 votes,” the author remarked. “Since the 2000 election the Republican Party has only been able to win by cheating at the ballot box.”