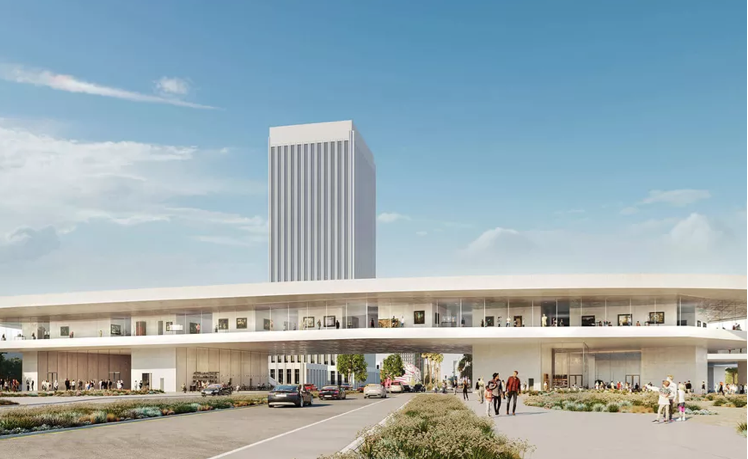 THE CITY-Despite last week’s announcement of the infusion of $50 million into the Los Angeles County Museum of Art’s fund for its new building bridging Wilshire Boulevard, LACMA is still deceiving the public and its donors about the true costs of the proposed span.

While admitting that the new museum structure will be smaller than the four it is replacing, LACMA continues to insist that $650 million – the figure the County Board of Supervisors signed off on last April, when they approved the project – will get the job done.

Recent press reports put the cost at $750 million, but the real price tag is much higher. Disclosures under the California Public Records Act have lifted the veil on the true costs of architect Peter Zumthor’s bridge, and the spectacular risks of LACMA’s building scheme. According to internal county emails, two years ago LACMA’s costs were already soaring out of control, climbing above $750 million onward to $900 million.  Since that time, construction costs have gone up at least 10%, putting LACMA’s real costs somewhere between $825 million and a cool billion. Unless the global economy tanks, these prices will continue to go up.

LACMA still refuses to release actual construction cost estimates, a genuine floor plan, or any other details of the project that would allow an independent audit of the true price tag and the reality of just how much square footage of gallery space and, importantly, linear feet of gallery walls, the publicly-owned museum is losing.

The public records reveal that on January 29, 2018, Antoinette Chandler, who is the assistant treasurer and tax collector for the county in charge of public finance, was deeply worried about LACMA’s fiscal health and the rising costs of Zumthor’s building. “There are two key considerations for the LACMA project,” she wrote in a key email, “which include capping the County’s contribution to $125 million and identifying additional security/sources of repayment for the proposed $300 million financing to ensure the County isn’t obligated to repay any portion of the transaction.”

Translation: County officials were more than nervous. As LACMA's projected building costs skyrocketed, the county’s fiscal guardians were alarmed by the prospect that the taxpayers might end up on the hook for an out-of-control project. There simply was no guarantee that LACMA would or could repay the $300 million in county-underwritten bonds. The alert Chandler was trying to shield the public treasury from the truth that LACMA might not have sufficient collateral to back the bonds.

Among the county number crunchers, this was panic time at the Hall of Administration. The figures did not add up. The county was giving LACMA $125 million outright, subsidizing another $300 million in loans ($510 million with interest), and LACMA was supposed to furnish $225 million on its own.  That brought the cost of the new LACMA building to the oft-repeated $650 million. But now the estimates were ranging from $100 million to $250 million more.  How was LACMA going to find as much as an extra quarter of a billion dollars?

The new $50 million helps, but with such a wide gap, the answer seemed clear to county accountants:  the public treasury.

It appears as if LACMA director Michael Govan is playing a deceitful game. Knowing full well that he still doesn’t have the money, he’s poised to demolish the existing buildings sometime this summer and then, as the fiscal reality dawns on credulous public officials, he’ll present a Hobbesian choice:  Either the Supervisors fork over more money or the county’s most important cultural institution will implode, leaving a huge pit on Wilshire Boulevard, with neither art – now sequestered in storage – nor money to fill it.

The only other answer to Govan’s quandary would be to make LACMA’s new building even smaller.  Officially, it’s already 11 percent smaller, which Govan acknowledged shortly before the Supervisors’ lopsided 5 – 0 approval was recorded. Some recent estimates, based on the few plans LACMA has released, put the loss of square footage at closer to 35%. With no public accountability, the taxpayers (and donors) will never know what we’re getting for our money.

Still, as any schoolchild understands, as prices goes up, square footage goes down. Charted on a graph, it's what high schoolers would immediately recognize, a negative slope. In the world of construction, and museum-building, that’s a slippery slope, and politically untenable. If LACMA asks for more money, it is admitting that $650 million won't cover the square footage it wants or needs.  That, in turn, is tantamount to admitting the museum needs to shrink further to stay on budget.

Asking for more is admitting you’re stuck with less.

The question is, given the choice between a museum too small for its permanent collections at nearly double the original price tag and no museum at all, will the County Board of Supervisors pay Govan’s ransom? Or will our civic leaders finally face up to reality, and force LACMA back to the drawing board, so that our public museum can grow, rather than shrink, at a cost that doesn’t bankrupt us all?

(Greg Goldin is the author of Never Built Los Angeles and Never Built New York. He is presently working on an exhibition at the Museum of the City of New York on Central Park.) Prepped for CityWatch by Linda Abrams.